Secretary of Technology George S. Newstrom dreams of a wired future — but for now he must solve a logistical nightmare. 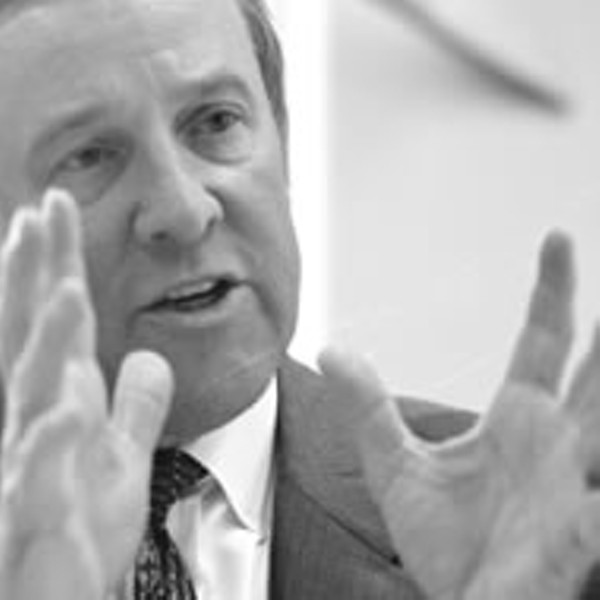 His mission: to advise the governor on the growth of technology in Virginia's economy and to better the state's use of information technology. Sound kind of dry, and well — technological? Newstrom understands.

"Technologists — and I've been in the industry for a long time — tend to be the nerdy people. I'm not going to show you my pocket protector, but I do have one," he says. "The fun thing about technology is I think we can do something totally different than we have in the past."

He holds up his slim silver cell phone. You can use these for talking and now, for sending images, he says. But the next evolution of that telephone, which already exists in Japan, serves as a credit card. "You can go to a Coke machine in Tokyo and charge that Coca-Cola on this credit card. … If you think about the potential of this capability, and you tie it to the things that we talk about in how government does service — whether you pay for DMV registration or if you're a person on disability or welfare — you get your services this way." His enthusiasm overflows. In Newstrom's head, we already carry around superphones that help us pay our taxes, chat with congressmen or make a state-park camping reservation to get away from it all.

Before that can happen, however, the department of technology must finish task one: fixing and extending the way state government uses computers. Today, Newstrom says, "there's almost nothing you can't do on the Internet." But access to government services is limited, which means Virginians continue to waste time standing in line.

Take the way people apply for personalized plates at the DMV, says Deputy Secretary of Technology Eugene Huang. Now, you can submit your request for a plate online, but it may take up to a week to get a reply after an employee searches a database of already-existing plates. Why not place the database online so customers save time by doing their own searches?

Newstrom gives another example: Half of the approximately 5,000 forms Virginia government uses are available on the Internet — but only about 5 percent of those are useable in online form. So people waste trees and energy by downloading, printing and sending information that a government employee will re-enter into a computer anyway. Why not make it possible for citizens to simply submit forms online, speeding processing and eliminating the need to repeat basic information?

Changes like these sound simple to make. But the state's information technology system is so sprawling and redundant that Newstrom and his agency must first consolidate the state's four IT divisions into the new Virginia Information Technology Agency. The total number of employees will remain the same — about 2,580 — but, Newstrom says, they will be organized much better.

Each government agency now has its own IT department, creating "tremendous duplication of effort, serious impediments to sharing information and high costs," according to one state report. For instance, Virginia has 15 separate contracts with the computer company Dell alone. State agencies now use 268 e-mail servers and eight different e-mail systems.

Gov. Mark Warner and Newstrom decided this had to change — and quickly, for financial reasons. Virginia will have spent a total of $448 million in IT costs for fiscal year 2002; a sum that Newstrom says will decrease significantly when a single state technology agency calls the shots. For fiscal year 2004, he says, the net savings to the state will be $23.4 million. "We believe there's about $100 million in savings in what we're trying to do," Newstrom says. "I believe that's a significant enough number that most citizens would want us to do that."

The change will take time — about 12 months — and caution: "We cannot afford any discontinuity" in service, Newstrom says. Huang holds what Newstrom calls the "road map" — a thick black binder containing the consolidation plan more than 200 people helped create. The ultimate goal is to make Virginia the most wired state in the nation.

"Think about the opportunities," Newstrom says. "Not just to save money, but the opportunity to get services from government in a totally different way. Don't have to get paper. Don't have to go to a building. It's downloaded while you sleep every night. ... We're focusing on the immediate, the cost savings, but the potential for what technology can do is pretty exciting." S