VCU’s McGlothlin Building is a fine example from one of the world’s most beloved architects who recently passed. 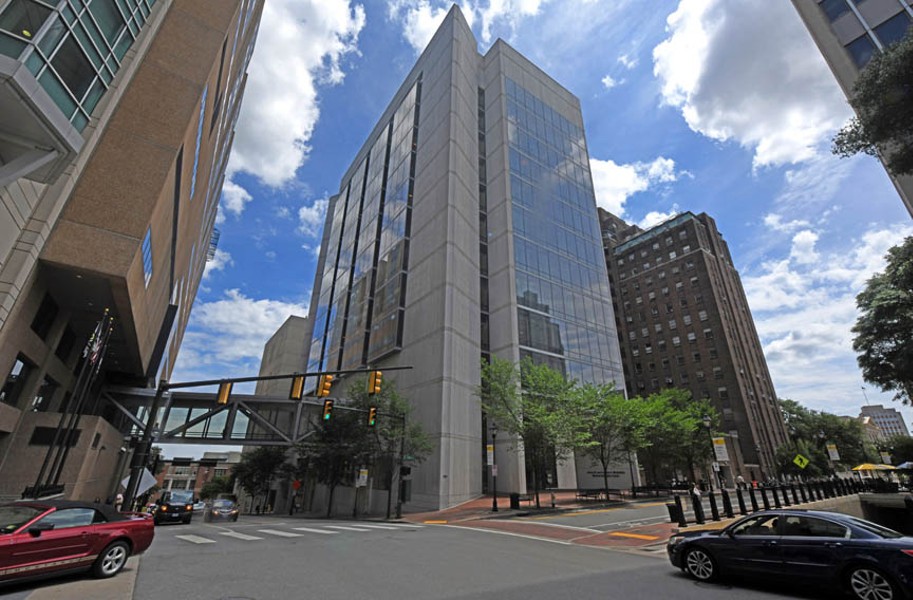 I.M. Pei, the celebrated Chinese-born and American-educated modernist architect, whose buildings worldwide delight the general public and are revered by hardened aesthetes, died last month. He was 102.

Pei's celebrated opus includes the glass and metal pyramid at the Louvre in Paris, Boston's crisp John F. Kennedy Library, the East Building of the National Gallery of Art in Washington, Cleveland's tentlike Rock and Roll Hall of Fame and the majestic Museum of Islamic Art in Doha, Qatar.

His death reminds us also that in 2013 the firm that bears his name also designed a high rise in downtown Richmond. This is the McGlothlin Medical Education Building at Virginia Commonwealth University. Such architecturally distinguished contemporary buildings are rare here.

The McGlothlin building that the Pei Cobb Freed firm of New York designed with Ballinger, based in Philadelphia, stacks 200,000 square feet of institutional space seemingly weightlessly to form a 12-floor high-rise. This sliverlike form was shimmied onto its tight site at 1201 E. Marshall St. across from the university's main hospital, the Gateway Building. McGlothlin possesses most of the qualities that marked Pei's signature work during his half-century plus career. Those characteristics include alertness to context, interiors that express openness and a sense of welcome, top-notch materials, sharp and consistent sculptural geometry, and an overall sense of lightness in both massing and coloration. These trademarks, in addition to the de rigueur Pei circular staircase, are apparent when one enters McGlothlin's two-story lobby.

In no building, however, did Pei work his distinctive magic more successfully than at the National Gallery of Art up Interstate 95 in Washington. In 1968, the late Virginia cultural benefactor Paul Mellon selected Pei to devise an addition to the sprawling and architecturally timeless classical gallery of art that his father, financier Andrew Mellon, had commissioned in 1935 from architect John Russell Pope. Thirty-eight years later, Pei took a difficult triangular site — the closest undeveloped site to the national Capitol — and spent almost a decade perfecting a solution for a marble pavilion that included galleries, museum offices, lobby spaces and dining and sales areas.

How did VCU come to engage so lauded, and not inexpensive, a firm as Pei Cobb Freed? It was probably through institutional self-interest. The McGlothin Building replaces the former A.D. Williams Clinic which was a seven-story, red brick, art deco architectural gem whose ziggurat form was a diminutive version of its adjacent, 12-story neighbor, West Hospital. West has been a signature feature of Richmond's skyline for almost 70 years; our very own — if stout and brooding —Chrysler Building.

At the time of McGlothlin's construction, the university intended to demolish and replace West Hospital. But anticipating both infrastructural challenges and public outcry that might accompany the potential loss, the university took a pre-emptive strike: McGlothlin was a signal that the replacement building would be of equal, if not higher quality.

Now, wisely and happily, the recently-approved VCU master plan calls for remodeling and converting West to residential and office use. It's a win-win: The campus got a Pei Cobb Freed building and West Hospital awaits a rehab.

Interestingly, while West and McGlothlin could not be more different architecturally, they complement each other in part because each is a specimen of the best design of their respective eras. "The heavily-textured brick of the old West Hospital and glassy weightlessness of its new companion is sophisticated, a model for other projects in Richmond," says architecture writer Don O'Keefe. "The creams and grays are simultaneously sterile and comforting, appropriate architecturally for a medical building."

Norman Foster, the brilliant London-base architect who perhaps succeeds Pei as the world's most widely admired architect, told the New York Times that the artistry in Pei's buildings reflects the late centenarian's training and career of working at drafting tables, before computer assisted design.

"In the days we drew by hand, we used sharp number 4-A pencils. If you look at the range of his work, the link is the recurring geometry, which produces a kind of triangulated edge. That edge is in the Louvre pyramid and the National Gallery. I see 4-A sharpness, a kind of razor-sharp clarity."

McGlothlin also contains such clarity. It takes its place among VCU architectural landmarks from much earlier times such as Hunton Hall and the Egyptian Building, and the neighboring Monumental Church and old City Hall.