Norfolk, against political and economic odds, has pulled off something Richmonders have only dreamed of - a light rail transportation system. 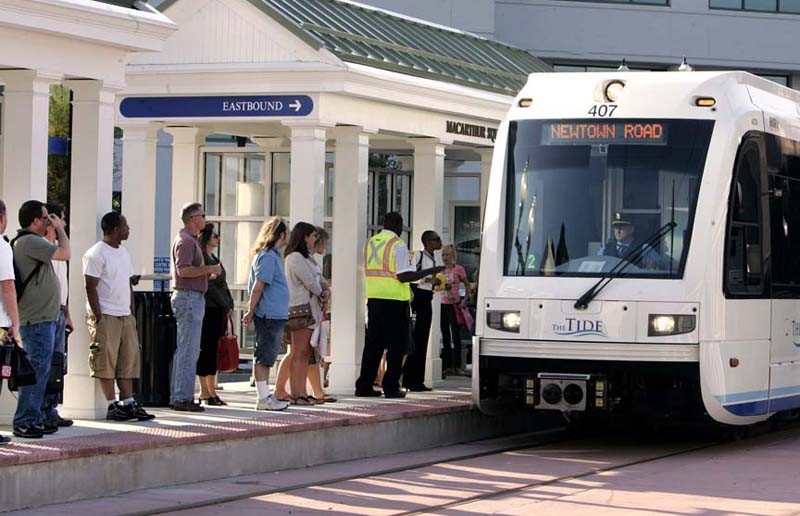 Where did August go? No more languid days on the sand at the north end of Virginia Beach with summer books or meandering conversations and seafood suppers with friends and family. Not missed is the jolt each vacation evening when we clicked on TV news: Daily, the stock market whiplashed radically; the Dismal Swamp was afire; and sadly, August was the deadliest month so far this year for Americans fighting in Afghanistan. The grim statistic was punctuated by footage of the commander in chief awaiting the deceased at Dover Air Force Base in Delaware.

What next, we grimaced — earthquakes and hurricanes?

But there was a welcome antidote to the litany of uncertainty and violence in the television newscasts. Local reporters were borderline giddy about the approaching, Aug. 19 opening of the Tide, Norfolk’s ambitious, new, mass light rail system, the first in Virginia.

As Richmonders, we were intrigued by what Norfolk had pulled off since discussions have long been under way to establish designated bus lanes from East Broad Street downtown to Willow Lawn. And this could set the stage — just maybe — for a light rail system connecting Rocketts Landing with the West End.

Some Richmonders have been pushing fixed-rail trolleys for decades now. A visionary and indefatigable civic leader, the late Elisabeth Scott Bocock made it her personal crusade throughout the 1970s and ’80s. It makes sense for numerous development and environmental reasons. And trolleys are part of our patrimony since one of the world’s first electric streetcar system was here in 1888. Longtime residents still talk fondly about riding the trolley.

Miraculously, Norfolk, against political and economic odds, pulled off something Richmonders have only dreamed of. The media buildup to the Tide’s opening day featured naysayers, of course. At $338 million, the system was too expensive, they said, and costs exceeded budget. Others moaned that the 7.4 mile-route, all within the Norfolk city limits, didn’t serve major population centers. And as just the first phase of what could become a regional system, it’s obvious that the Tide doesn’t link the region’s contiguous cities of Hampton, Chesapeake, Suffolk, Portsmouth and Virginia Beach. Blah, blah, blah.

“The Tide Rolls In” proclaimed banner headlines in The Virginian-Pilot on opening day. At 8 a.m. four of us drove to Norfolk to see what all the excitement was about.

Approaching Norfolk via the Virginia Beach Expressway (through a smelly haze of smoke from the Dismal Swamp fire) we got a reinforcing jolt as a sleek, two-car Tide train passed us headed in the opposite direction on a parallel, raised track.

We’d decided to ride the entire seven-an-a-half-mile route, so we drove to the Tide’s western terminus near the Eastern Virginia Medical School campus and Ghent, a neighborhood similar to the Fan District. On-street parking is rare in much of in-town Norfolk, so we pulled into a commercial lot. From there it was a quick stroll to the EVMC/Fort Norfolk Station at Colley and Brambleton avenues, the westernmost of 11 stations.

Like most of the stations there was an attractive, open-air shelter designed in a spare, classical style with white pier columns and handsomely appointed railings. The graphics were understated and contemporary. But what we’d come for — the Tide, a white, capsulelike sliver of a vehicle with oversized windows — awaited with open doors. A bevy of smiling, opening-day greeters stood on the tracks: “Welcome to the Tide,” they said.

We hopped aboard and pulled off. The American-made cars (by Germany-based Siemans AG) were narrower than subways cabs in New York or the Washington Metro. But unlike those city systems, the Tide moves above ground and crosses city streets. This requires equipment more automobilelike in scale.

The first stops, all downtown, were York Street/Freemason, Monticello Avenue and the MacArthur Square Station, which serves the huge downtown mall, and then Civic Plaza Station near City Hall.

The biggest surprise was that Tide made slow, 90-degree turns fluidly, making it possible to see the historic, but definitely contemporary streetscapes in ways different from previous visits. I was struck by how pristine Norfolk looked.

Many of the folks on board couldn’t have cared less about what was outside the windows. They were in a holiday mood. One man asked those crowded aboard to pose for a photo. At the Harbour Park Station a young couple boarded and navigated their large baby stroller easily as riders happily gave way. There were groupings of grandparents anxious to share opening day with their grandchildren. There were all ages, all races and all were smiling.

Once past the downtown ballpark, the Tide’s pace picked up while the tracks became a straightaway for two-thirds of the route. The train seemed to take flight as it rose on concrete piers and approached the Norfolk State University station and afforded excellent views of the well-manicured campus and impressive stadium. Two stops later we were treated to dramatic views as the train crossed the eastern branch of the Elizabeth River. Across the water, in Chesapeake, were handsome residential neighborhoods. Next up was the Military Highway Station and finally the Newtown Road Station at Norfolk’s border with Virginia Beach. Here there is a 266-space park-and-ride lot (Hampton Roads Transit system buses serve this and each of the other Tide stations). More than one passenger asked rhetorically, “Wouldn’t it be great if the Tide went all the way to the oceanfront?”

The return to downtown took 15 minutes. As we returned to our parked car we were thrilled and impressed. Norfolk has taken the big plunge. It’s invested in its future. It’s inevitable that the system will be expanded. And, importantly, Richmonders now have a paradigm nearby that they can examine and experience. It’s difficult to argue with the beauty and flow of the Tide. S