A new exhibit mixes painting and photography in layers at Candela Books and Gallery. 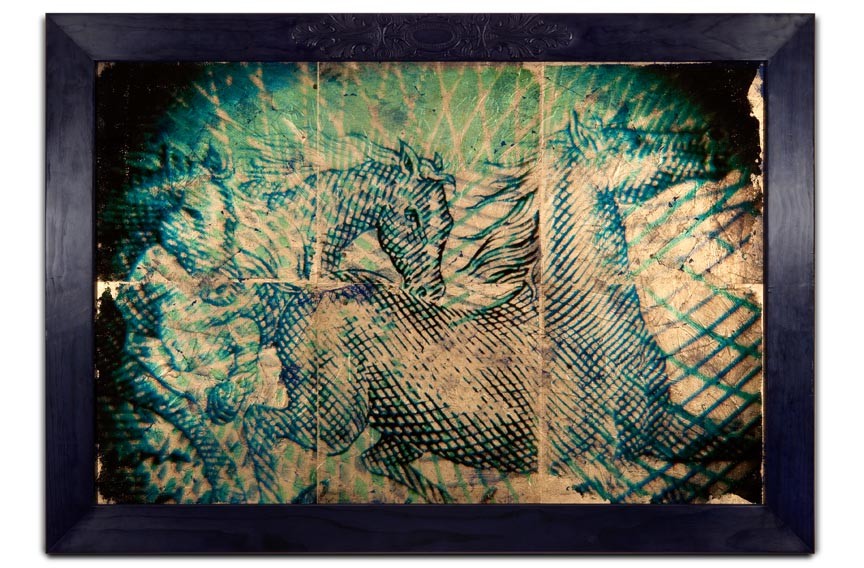 For a pair of artists interested in merging life and art, it makes sense to give a talk accompanied by a rescued German shepherd. Based in New Orleans, husband and wife Jeff Louviere and Vanessa Brown combine their artistic backgrounds of painting and photography to create a body of work that's visually stunning and conceptually appealing. Theirs was a talk not about relational aesthetics, but an authentic process-based practice that values the exchange of conversation, playful absurdity and shared lives.

"Louviere + Vanessa Counterfeit" is a series of 19 large photographic paintings. I use the phrase "photographic paintings" loosely because the artists purposefully create interdisciplinary works to question the tension between photography and painting, and realism and abstraction. Process is an integral component — multilayered both physically and conceptually. With each layer, the subject matter, media and narrative become more decontextualized until reality itself becomes obscure.

For each work, the artists begin by applying thick, gestural marks to a board, along with the written watermark "counterfeit." Next, gold leaf covers the painted surface while retaining the built-up brushstrokes. Then, a colored photograph printed on Kozo paper is laid on top of the painting. Finally, resin is poured over the entire surface, eating away at the white parts of the Kozo paper, which allows the gestural marks and the gold leaf to come to the surface while maintaining the colored print.

Each work is housed in a custom wooden frame, made by Brown and her father, who is paraplegic. The photographic paintings themselves depict disparate subjects as wide-ranging as galloping horses, a young male soldier, and angels and birds. The common thread is world currency. Paper money is reiterated by the white lines — think deep folds on a bill — dividing each picture plane into compartments. Because each photograph is taken with a macro lens, the pixilated images resemble Roy Lichtenstein paintings of Ben-Day dots. Previously unexplored by "Louviere + Vanessa," vibrant colors of blues, reds, yellows and greens recede into dark and gritty vignettes. The luminescence of the colors coupled with the scale of the works unexpectedly affects the viewer in a way that digital reproductions fail to replicate. Walter Benjamin would call it a "unique aura."

The final layer is the title. Not descriptive in any obvious sense, as seen by "It was their fear teasing the torches to burn hotter" (2010), each is a pataphor based on late-19th-century French symbolist writer Alfred Jarry's practice of pataphysics. In plainer terms, the titles are one step removed from a metaphor or two steps removed from reality. Essentially absurdist in nature, historically artists including Marcel Duchamp and John Cage have used pataphysics and elements of chance in their work.

But all of these layers aren't initially apparent, and some of the information is clear only after the artists explicitly explain. While each layer adds a compelling theoretical dimension, the work projects complexity for complexity's sake. Perhaps even upholding explanation for the intellectually astute only if he or she is able to complete the puzzle; high art at its finest. This mining through historical material is prescriptive of and aptly describes the type of multi-reference-based art being exhibited.

Or is a larger play going on? Might each photographic painting be another jab at the futility of discovering reality? Do all the layers obscure narrative to the point that absurdity is all that remains? Perhaps this is the point: A search for meaning among the layers of history ultimately comes up empty. Then absurdity suggests more than just playfulness — it becomes something dark and malevolent that's obliquely ominous. In fact, something about these works seems mysterious and unapproachable.

Maybe it's the highly saturated color or the glow that emits before receding into the dark borders. Maybe it's the subject matter, all of which appears oddly romantic or creepy, almost as if they belong on cemetery headstones. Whatever it is, there's yet another layer that's neither intellectually nor visually palpable. Indeed, the work seems supernatural in an almost visceral sense. And for artists that attempt to dissolve the barriers between life and art, this commentary on absurdist practice ultimately chases after transcendental topics tied to life, death and the meaning of existence. "Louviere + Vanessa Counterfeit" provides no explanation for these philosophical ideas, but allows for a dialogue that considers much more than tangible works in a gallery. S