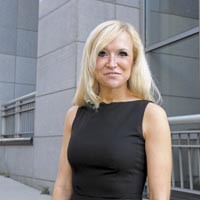 Or perhaps it was simply that Edward Baker, the defendant she was prosecuting on heroin distribution charges, had been standing outside of Martin Luther King Middle School on Feb. 29 — right about the time the afternoon dismissal bell was ringing — waving his hands and openly offering his wares.

Whatever the reasons, Baskervill's closing statement netted what may well be the longest prison sentence in recent memory for a drug conviction. The jury in the case returned with a 30-year term for Baker after deliberating for just 15 minutes.

Hygiene also may have played a part in sentencing. When police stopped Baker, who was “flagging down cars looking for customers,” Baskervill says, they initially found no drugs. After a drug dog got a positive hit, they searched him and discovered he took wardrobe tips from Heidi — layering pants, a pair of bike shorts, three pairs of boxers and a pair of briefs.

“A lot of drug dealers hide their drugs behind their testicles,” Baskervill says, unflappable as she recounts Baker's undignified undoing. It was there that police found a handball-sized package-full with 38 hits of heroin individually wrapped in tin foil. “There really wasn't any question of if he was in possession of it,” she says.

“I'm the first one to be generous with someone at sentencing if it's their first offense,” says Baskervill, a former social-work student at Virginia Commonwealth University. This was not Baker's first conviction, though his priors were small-time possession convictions and one for intent to distribute. “A lot of people are trying to get their lives together and a lot of times that felony offense is the thing to inspire that.”

In Baker's case, he'll have ample time to find inspiration. At 28, he'll be eligible for AARP membership when he's released.