“Hero of All Geese” Deters Birds with Beats 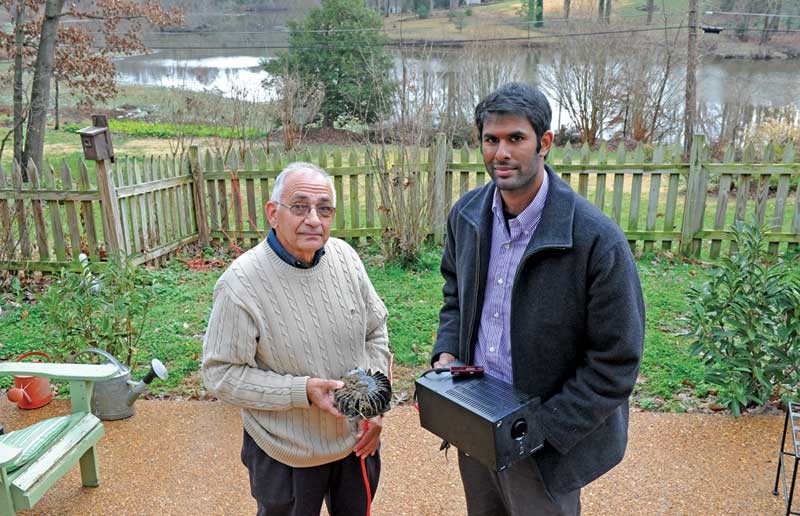 A gosling-loving couple and a team of Virginia Commonwealth University researchers have joined forces to save the beleaguered geese of Canterbury Lake.

The geese, which live year-round on the little lake in the West End neighborhood, anger some residents by tearing up and fouling their lawns each spring. In July the Canterbury Lake Association voted to call in the U.S. Department of Agriculture’s Wildlife Services program to exterminate the flock.

The neighborhood erupted. About a dozen people picketed on the side of Pump Road. The Richmond Society for the Prevention of Cruelty to Animals started an online petition (it’s up to 1,700 signatures). Among the flock’s defenders were Patricia and Luke Floyd. “Why live on the lake if you have to kill the wildlife every year?” Patricia Floyd asks.

Then the geese got an unexpected reprieve. Amid all the hoopla, the birds had grown back their flight feathers after molting, making them almost impossible to catch. They are safe — for now.

The dilemma intrigued a team of researchers in VCU’s bioacoustics laboratory, which studies the effects of sound and vibration on hearing and behavior. The lab’s director, Martin Lenhardt, had developed a device that repelled sharks with sound. Could it be adapted as a goose deterrent?

This fall they brought the shark chaser to the Floyds’ yard, and it worked. Tarun Sinha, a 23-year-old student pursuing his master’s degree in bio-medical engineering, built a smaller-scale apparatus to test.

It’s a simple design. Sinha connected an inexpensive MP3 player to a sound amplifier, which is hooked up to round, finned transducers, similar to subwoofers. The device plays low-frequency beats (from Beethoven, Kesha, whatever you like) and the transducers, embedded in the soil, vibrate the ground.

People can’t detect it. But the geese did not dig it. They avoided the area, even when the Floyds scattered corn as a lure. Apparently geese have very sensitive feet. Who knew?

“It works every time,” Luke Floyd says. The real test will come in the spring, when the geese habitually move into neighbors’ yards to nest and raise their goslings. “If it works, which we’re pretty certain that it’s going to,” Patricia Floyd says, “then we’re going to offer it to the neighbors whose yards are most impacted by the geese.”

Sinha and colleague Ray Gargiulo continue to fine tune the device. (Sinha considers calling it “Geesebusters.”) They intend to make it wireless, add a remote control and build a smaller, weatherproof enclosure for the electronics. Sinha has even patented it, in partnership with VCU, for potential use on nuisance geese in places such as airports and parks.

“And then,” Patricia Floyd says, “Tarun will be the hero of all geese.”