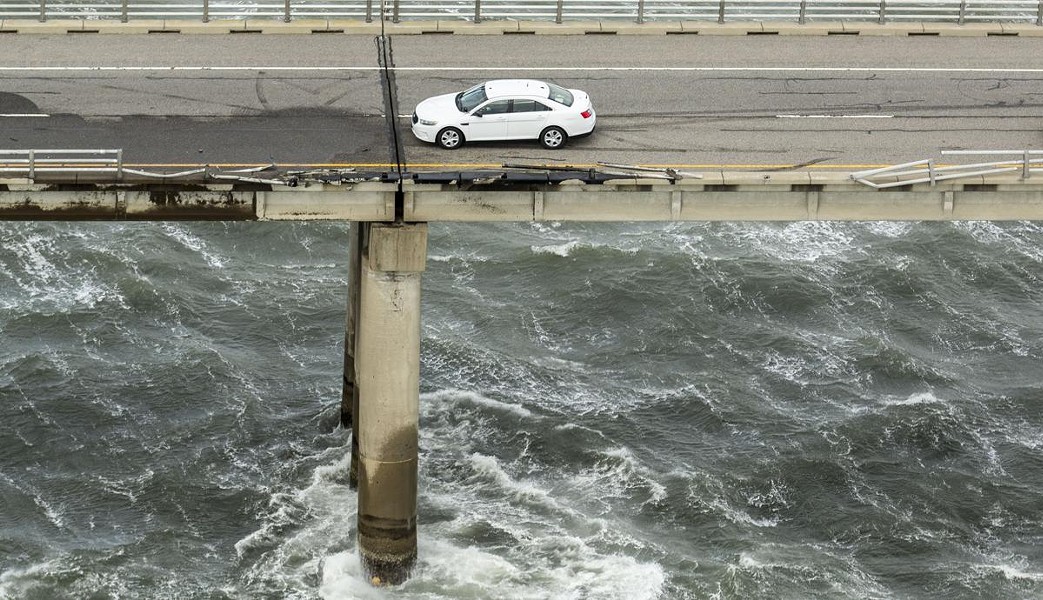 Bill Tiernan/The Virginian-Pilot Missing guardrail along a section of the Chesapeake Bay Bridge-Tunnel where a tractor-trailer went over the side at the 15-mile marker, killing the driver in 2017.

Heads up: This question, posed to the newspaper’s Glad You Asked initiative, gave this reporter nightmares.

A reader wants to know: What should a driver do if their vehicle goes over the side of one of the bridge-tunnels? Are there any life-saving structures in the water or on the bridge that will increase the chance of survival?

Most of us know the odds of such a thing happening are low: less than one-half of 1 percent of crashes involves a vehicle being submerged, according to AAA. But Hampton Roads, with all its water crossings, is a tough place for anyone with gephyrophobia (fear of bridges).

A single headline about an over-the-side accident is enough to rattle the rest of us.

Emergency experts say it’s a good idea to mentally walk through the what-ifs — despite the risk of bad dreams.

After all, most bridge railings can only withstand a glancing blow; otherwise they’d be too heavy for most spans to bear. And we do know the unthinkable does happen around here.

The Hampton Roads and Monitor-Merrimac bridge-tunnels have each had at least one vehicle bust through the barriers and plunge into the drink. Sixteen — mostly tractor-trailers — have gone over at the Chesapeake Bay Bridge-Tunnel, which is longer and more exposed to stronger winds.

Statistically, those numbers are miniscule compared to the millions and millions of uneventful crossings at the area's bridge-tunnels. But when it all goes wrong, it's often very wrong. Only two people have survived an over-the-side at the CBBT.

Timing and luck — or whatever you prefer to call good fortune — are major factors. Water conditions and whether it’s day or night will affect survival and rescue odds. Under any scenario, it’s a long fall.

Those who do survive the initial impact will find no life-saving structures in the water or on the bridge. Officers and safety folks who regularly patrol the bridge-tunnels do carry rope and throw rings. They can also shout guidance to victims through a super-megaphone known as a Long Range Acoustic Device, which can project sound out to about a mile.

Other than that, “we call the Coast Guard or marine patrol,” said CBBT Police Chief Edward Spencer. “That’s about all we can do.”

So, while it’s unhealthy to dwell, it might be wise to review some just-in-case steps from experts. Most what-to-do lists start with “Don’t panic.” Yeah, right. That’s not an option for most of us.

Our best hope is to cut through it as quickly as possible. Action in the first few minutes is crucial.

1. The weight of the engine means your vehicle will likely hit the water nose first and air bags will deploy. Most models will float for a few minutes, some for as long as five.

2. Water can run deep around here — as much as 100 feet at the CBBT — so do all you can to escape your vehicle while it’s still floating. Don’t waste time trying to call 911.

3. It may be possible to open a door but that will only make a car sink faster. Focus on the windows. Electric ones may still function. If not, you’ll have to break the glass. Forget the front and back windshields — they’re too tough. Use any hard object and start bashing around the edges of the window, where it’s weaker.

4. Having an emergency hammer/seat-belt cutter device could save critical seconds, but only if you’ve stowed it where you can find it under such conditions.

5. Yank off heavy clothes and kick off shoes. If you have children in the car, push them out the window first, starting with the oldest. Older kids may be able to help younger.

6. If you can’t break a window or get out before the car goes under, you’ll still have a shot even as it sinks. Once enough water fills the cabin to equal the weight of water pushing on it from the outside, you should be able to force open a door. That should occur when there’s about 2 inches of air bubble left near the headliner. Don’t think you can wait until the car settles.

7. Vehicles sinking in 15 feet or more of water often turn upside down. Once you’re out, follow the direction of your bubbles. If you can, push off the car with your feet for momentum.

8. Some hopeful facts: Under water, people can often hold their breath significantly longer than they think. And bodies are naturally buoyant. The only thing that matters in the moment is getting faces out of the water.

10. Once on the surface, get your bearings and look for any debris that might help keep you afloat and easier to spot. Keep arms and legs moving to generate muscle heat while awaiting rescue.

11. If you’re a decent swimmer and not too badly injured, make for the nearest shore or bridge-tunnel island but don’t exhaust yourself trying to fight a strong current.

12. Don’t give up. Don’t forget that some people make it. Like Morgan Lake, a 22- year-old whose car was knocked off the Chesapeake Bay Bridge in Maryland by a tractor-trailer in 2013. She survived the 40-foot fall, escaped her car under water and swam to some rocks, with only bumps and bruises.