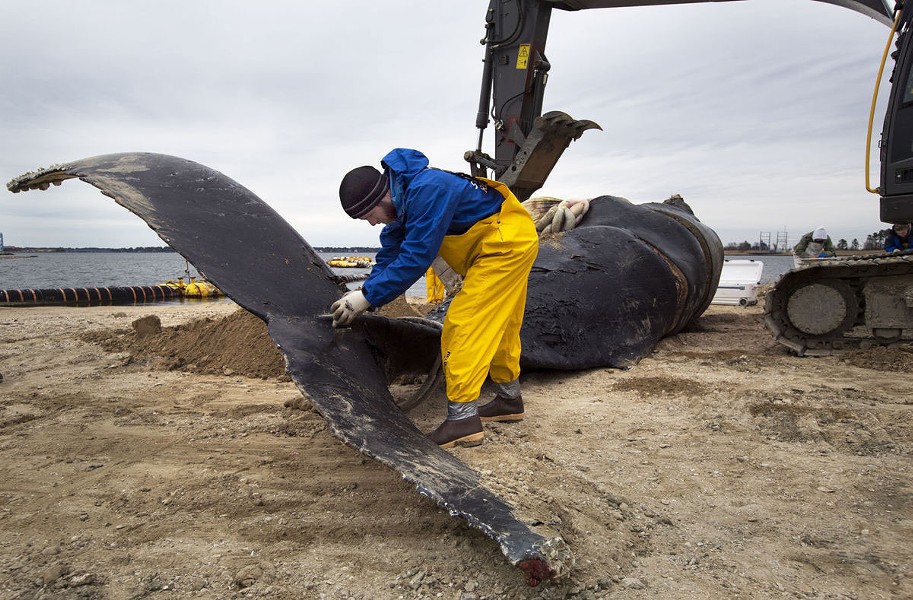 The' N. Pham Alex Costidis, Coordinator with the Virginia Aquarium's Stranding Response team, performs a necropsy on a juvenile humpback whale at Craney Island in Portsmouth.

Alex Costidis ran a razor-sharp knife through the thick blubber Friday morning, exposing some of the whale’s organs.

Somehow, the smell didn’t seem to bother him.

Costidis, the coordinator for the Virginia Aquarium’s Stranding Response Program, is a veteran at performing necropsies – non-human autopsies – on marine mammals.

He prefers to save animals that get hurt. But when one turns up already dead, like the juvenile male humpback found Thursday morning at the north island of the Hampton Roads Bridge-Tunnel, it’s his job to figure out why.

The whale – 33 feet long and an estimated 10,000 pounds – was towed to a beach on Craney Island, where it will be buried once the necropsy is complete.

During an exterior examination of the whale Thursday afternoon, Costidis and his team found four large lacerations consistent with an interaction with a large ship propeller. One, about six feet long, was so deep that the animal’s stomach and some intestines had spilled out.

“We’ll look at everything today,” Costidis said. “Today we’re going to get inside and see if the evidence on the inside points to what we’re seeing on the outside.”

Costidis and his crew took tissue and blood samples from all the vital organs. He expected the process to take three or more hours.

He was hesitant to say conclusively that the whale died from the prop wounds.

“It could have died first, then gotten hit by a boat,” he said. “We just won’t know for sure until the lab work comes back.”

Costidis said humpbacks don’t have the same kind of sonar other marine mammals do, and that could lead a whale to get hit by a boat. The area’s murky water increases that probability. And the fact that humpbacks have been feeding around the shipping channels leading into the Chesapeake Bay for the past couple of months further lends itself to the boat prop theory.

“We’ve seen this whale before,” Costidis said. “The Duke (research team) has cataloged this whale, but I’m not sure what the number is. He was seen off the coast last month.”

While none of the researchers like to see the death of a whale, they take advantage of the opportunity to do research and collect data.

Humpbacks are baleen whales, using tough material in their jaws to filter food from the water. That material is a valuable source of information.

Smithsonian Museum research associate Charley Potter said the baleen can be used like the rings in a tree to age a whale.

“The baleen records a lot of information,” he said. “We’ll be able to tell what the whale had been eating and where it has been feeding. We’ll be able to find out if it was stressed before it died and how close to puberty it was. We’ll also know what kind of contaminants were in the waters it was traveling in.” 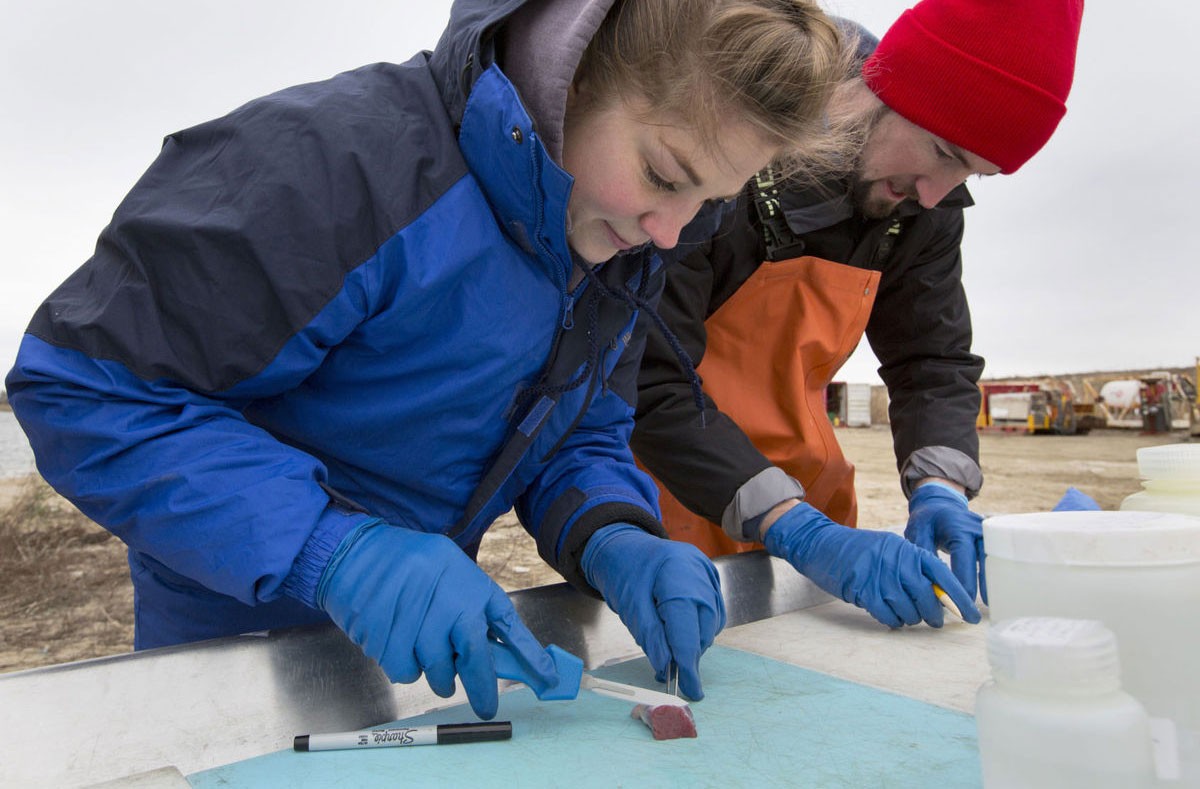 Potter said the animal’s ear wax also will provide a wealth of information. And he found two different types of barnacles on the whale’s fluke that will help him discover where it spent most of its young life.

“It’s a real shame,” he said. “I’m guessing he’s maybe two years old. But he won’t be going to total waste because we’ll be able to get a lot of information.”

Information that is next to impossible to obtain otherwise.

The whale "is very valuable to use for research,” Costidis said. “It’s a very large animal that lives in the ocean, so it’s hard to have access. So this is a great opportunity to collect a lot of data.”