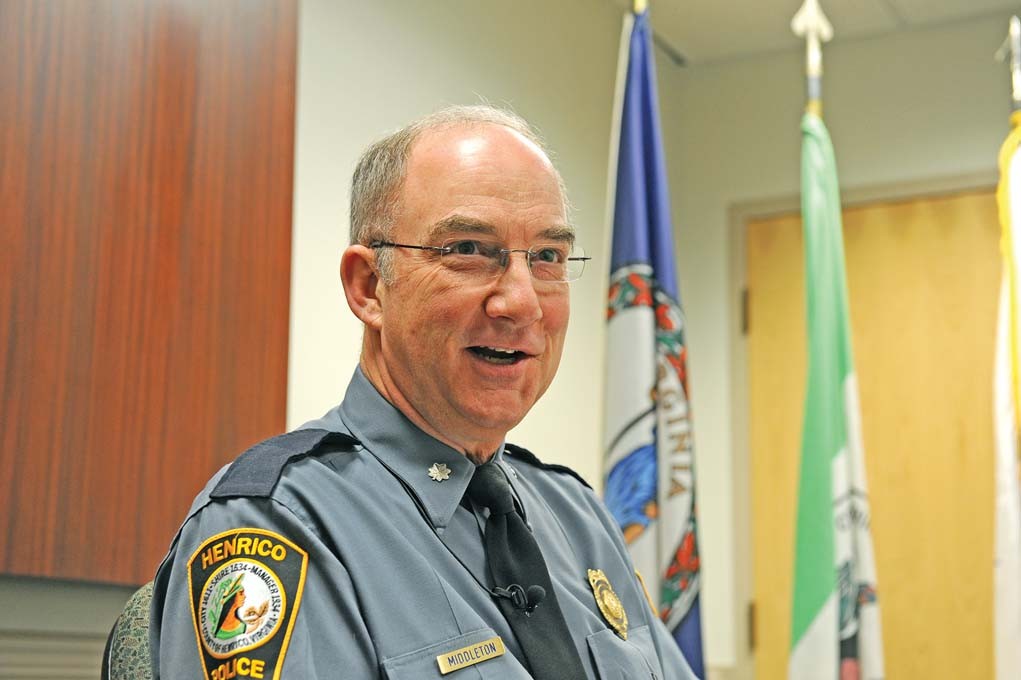 Douglas Middleton took an interest in law enforcement during the tumultuous 1960s and later enlisted in the Army. But first he needed a subject for his ninth-grade career paper.

Living with his family at Forest Lodge in Glen Allen, the historic hotel resort built by Confederate Capt. John Cussons in the early 1880s, Middleton happened upon a young patrol officer with the Henrico County Division of Police named Henry Stanley.

"It obviously impressed me," says Middleton, who takes over as Henrico's police chief in April after 38 years with the division. His interview subject in 1965, Stanley, is retiring after serving as chief for 16 years.

Middleton has his work cut out. He inherits a department that became the gold standard in policing in the Richmond region under Stanley, but faces something of a generation gap. Top brass are aging, inching toward retirement, while an influx of younger officers begins to stress longstanding police protocols.

Among the rank and file — there are 575 sworn officers — some see "a lack of responsiveness," according to one ranking officer, who says morale has been low after three years without raises and Stanley's unwillingness to budge from old traditions. For example, county police officers aren't allowed to choose between short sleeves or long, regardless of the weather, and about three years ago the division began requiring officers to cover up tattoos.

Technology has changed too. A global positioning system, installed for emergencies, is often used as a tool to track the whereabouts of officers, a la Big Brother, some say.

"There's some sense of us being ingrown, and needing a breath of fresh air," says the ranking officer, speaking on the condition of anonymity.

Middleton says he's going to consider changing the uniform rules, and plans to spend his first weeks as chief commingling with the rank and file to hear their concerns. "It's my intention to start spending a good bit of time out in the field," he says. "I want to hear their honest feedback on where they want us to go."

Middleton, who served in Vietnam from 1970 to 1971 with an assault helicopter battalion (his job was to intercept enemy signals via Morse code and map targets), says new technology in policing has made the division more effective in targeting problem areas of the county and tracking trends.

Crime in the county also has become decidedly more urban, particularly in the eastern corridors approaching the city. "Crime doesn't know any boundaries," he says. Being effective also means tapping the creative talents of the younger officers, he says.

Middleton will be sworn in as police chief April 5. — Scott Bass