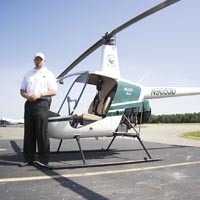 Strapped into a bench seat next to Hemming Hemmington and surrounded by a dome of Plexiglas, the flight feels a bit like floating in a bubble — a really, really loud bubble powered by a souped-up, four-stroke lawn-mower engine.

The ground falls away below.

“Look, there's the city,” Hemmington says, crackling over his headset monitor, nodding southward toward a cluster of what looks like waist-high concrete columns. He banks west toward what quickly becomes a model-train-sized tree line.

It's a visceral feeling, not unlike flying on a park bench, and it's a feeling that James Griffin, owner of Hanover-based Griffin Helicopters, bets will be the next big thing for area thrill seekers.

“Aviation is so cool,” says Griffin, whose muscular build and military bearing belies a childlike enthusiasm for chopper flying. “We can do a lot of fun things with the helicopter and I know a lot of people are screaming for something different to do.”

A half-hour of thrill-inducing flight costs just about $120, and Hemmington, Griffin's certified flight instructor even lets wanna-be pilots take the stick. Though he's flying a two-seat Robinson R-22 helicopter right now, he hopes within the next few months to have a four-seater helicopter and begin flying offering tours of area Civil War battlefields, the James River, area wineries or just about any other destination or route his clients can dream up.

“I want everybody to come in,” he says.

For those seeking bigger thrills, putting in the 40 to 50 hours needed to earn a pilot's license can run as little as $260 per hour — that's about $600 or more less per lesson than some other helicopter piloting courses.Aÿ

Of course that's about $200 more per hour than lessons in a standard small fixed-wing plane, but that really misses the point, Griffin suggests.

“I'm just not that into airplanes,” he says. After “a couple of times up … I was just bored out of my skull.”