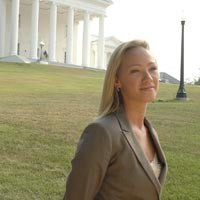 Helen O'Beirne's social justice light switch is stuck in the on position. Always has been.

Flash back to fifth grade, when an unenlightened classmate picked on her best friend, a Jewish girl. O'Beirne's best defense was a strong offense. Defending her wronged friend earned an angry phone call from school administrators to her mom. "They wanted her to be mad at me, but my mom was like, 'Way to go,'" O'Beirne says.

O'Beirne's still standing up for her causes as a lobbyist and advocate. She made a name for herself during the 2006-07 General Assembly session by playing an outgunned David against the monolithic Goliath of the payday lending industry in an ugly, trench-warfare General Assembly fight. Her work drawing attention to the ills of balloon-interest payday loans continues to resonate on editorial pages across the state. "We blew it up in the media," she says.

Her latest cause is fair housing, as director of Housing Opportunities Made Equal's Center for Housing Leadership. She's crafting the fair housing group's legislative agenda to push for fair housing initiatives and state mortgage lending protections for vulnerable consumers. Oh, and immigration (both legal and illegal) too, which O'Beirne says is "turning into a housing issue," with localities trying to legislate against South and Central American immigrants by putting restraints on housing.