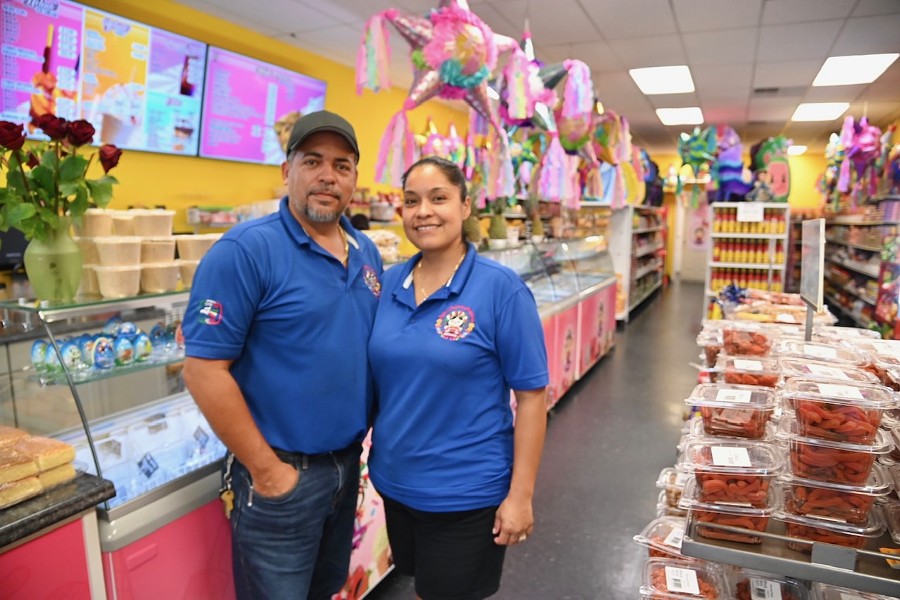 Mediterranean Flan, how I love thee. Let me count the ways.

One, you're creamy. Two, you're cool to the touch. Three, you're pleasingly solid going in the mouth and, four, there you melt, smothering the tongue in creamy bliss.

You sit invitingly inside your container in Dalia's refrigerator display, your caramelized top and bottom layers aiding in the illusion that you are a generous slice of Greek Moussaka. You tempt customers side-by-side with tres leches cake in a cup, and gelatina -- flan dotted with jello.

The Mediterranean Flan is my favorite here this week but I'm fickle. At Dalia's Dulceria y Paleteria Michoacana, the one-stop Mexican bakery, ice cream shop and candy outlet on Staples Mill road, your favorite dessert is apt to change with each fattening return visit.

Dalia's, decorated in bold pink and adorned with piñatas, offers a variety for every sweet tooth -- pastries, ice cream, sweet breads, specialized birthday cakes, and original creations like Mangonadas (fresh mangos in ice cream) and tarts filled with Bavarian cream and topped with fresh fruit. There are also homemade freeze pops with exotic flavors such as chile mango-- all of it delicious and distinctive, made fresh by Dalia's eight-person staff.

"Every customer is different," says Israel Nieves who, with his wife Dalia, opened the Dulceria three years ago. "I may like the ice cream but someone else might want candy, or bread, or cheesecake. I mean, there's plenty to choose from." At first Nieves declines to say, but his favorite confection in Dalia's arsenal turns out to be the Oreo ice cream... and pretty much all the pastries. "I have to be careful here," he says, laughing.

Dalia's pastry display will give you goosebumps, with freshly-baked puffs and baked items infused with sugar, icing, cremes and fruit: Cuernitos, Conchas, Quesitos, Orejas, strawberry tacos and, when available, King's Donuts, a huge snake-like creation stuffed with candy, perfect for large parties, but not for the faint-hearted.

"We saw that there was a need for a bakery in this area," Dalia Nieves explains, taking a break from scooping cones on a hot Thursday night. "The customers living here would have to travel far -- like Chesterfield -- to get fresh bread. In the Latino stores they sell Spanish bread but don't sell it fresh. It's packaged. It came into my mind to build a bakery here and make and bake fresh bread for people."

When the Nieves settled on the Staples Mill Road location, formerly a Loan Store office, they immediately turned a large storage room into a baker's workshop. The space had some real advantages. It was right next to Shelly's Comida Latina, a busy Mexican restaurant specializing in authentic (and inexpensive) Spanish cuisine. Israel says that there has been a lot of shared business between the two Latino food providers, "but we also get people who come from Little Caesars or even the Verizon location" in the same strip mall.

Dalia's Dulceria grew out of another enterprise, a party rental business called Dalia's Jumpers. "We would rent tables and chairs, bouncy houses," he says. "Then we started making piñatas and we decided to open a candy store because that goes with the piñatas." That store is still in the Jeff Davis Flea Market in Chesterfield, and exclusively sells candy. But it's not just the same old sweets, Dalia says. "Our candies are not made in the U.S.A., they are made in Mexico, many made with real fruit, she says, "with chile and without chile."

Since 2010, South Side residents have been enjoying the authentic "helado" ice cream and homemade freeze pops at La Michoacana on Midlothian Turnpike which, like Dalia's, emulates the feel and style of a revered Mexican ice cream parlor, most of them named after the shop widely considered to be the first in the country, La Michoacana,

Daila studied with a special helado chef in Mexico, where she was born, and learned to make her special ice creams. She and her staff churn them in mass every Monday and Tuesday morning. "It's a secret recipe," she adds. "I try and work hard to find the best ingredients." Among the offerings, her personal favorite flavor is the passion fruit, which includes dried berries and a touch of Mexican wine flavoring.

The steady business has had people asking if Dalia and Israel will open up another Dulceria."I've passed the idea to my mind. But we need to concentrate on what we're doing here," she says.

The entrepreneurial couple have been married for 18 years and have three kids. It was food that brought them together. "We met at the Wendy's drive thru," Israel laughs.

"I was waiting for my hamburger," explains Dalia with a grin, "and they were taking a long time, and he was in the car behind me. He was impatient and got up from his car and went to mine and asked what was going on. I said, 'I don't know, you've got to ask them. We're just waiting for our hamburger.'"

In a non-scientific sight test -- conducted over a dozen visits to the shop -- one can see that Dalia's enjoys a diverse clientele indicative of Henrico County's fast-changing demographics. And, in summer, the ice cream is king.

"We get everyone coming in here, all kinds of Americans -- Indians, Latinos, you name it. This is what binds us all together," Dalia says. "Sweets."