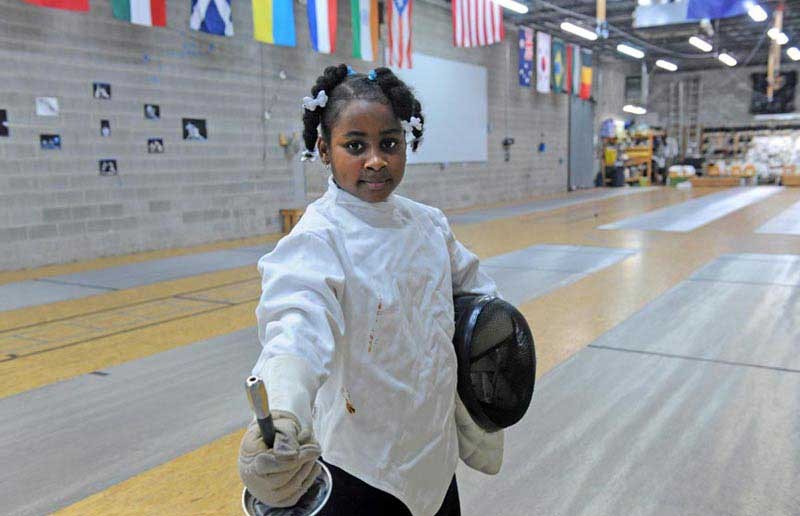 A champion from Cuba. A sport from medieval Europe. And pupils from Richmond’s housing projects.

It’s an unlikely recipe, but it works.

Every Wednesday evening, a white van picks up seven 9- to 12-year-olds from their homes in Gilpin, Mosby and Whitcomb courts. Their driver and gruff mentor, Lynwood Gray, brings them to the farthest corner of industrial Scott’s Addition, where the Richmond Fencing Club occupies a nondescript cinder-block building.

Inside, in a bright salon with a raised wooden practice floor, the young pupils practice the ancient sport of fencing.

The program is part of the Richmond Redevelopment and Housing Authority’s Youth Sports & Fine Arts Academy. In addition to the standard soccer and swimming, the academy also includes karate, golf and scuba diving. The goal is to expose children to sports they otherwise might never encounter, says housing authority public relations and marketing manager Osita Iroegbu.

Daejha Robinson, 11, knew swordplay only from television cartoons. She likes fencing when participants get to use the electric scoring system, she says, but she’s not interested in going pro: “I want to live my life.”

Few kids enter the fencing program with dreams of becoming swashbucklers. “Most of them had no idea what fencing was,” Gray says. “Their mothers sign them up for it.” There are few minorities in these sports, and students who excel may have a shot at college scholarships.

Coach Dee Hayes began fencing when she was 9. Her mother worked as an administrator at a sports boarding academy in Hayes’ native Havana, Cuba, in an office directly below the fencing salon. Lured by the sounds of the ringing blades, Hayes sneaked up to watch a match. She never wanted to leave.

Hayes studied foil and epee, two styles of fencing, under several world-renowned fencers, and later taught at the National Academy in Havana. She’s the current Virginia state champion in epee, and now she’s a coach with the Richmond Fencing Club.

Hayes had experience teaching children with behavior challenges, but the kids in the housing authority program pushed her to the limit. The first pupils she taught, about a year ago, arrived with attitude. They mouthed off. They ignored her instructions. “Who are you to tell me what to do?” they told her. “It was like, ‘Oof, I don’t know if I’m gonna be able to handle these kids,’” Hayes says. “It’s really tough.”

Other coaches in the sports program told her it wasn’t going to work. But after the first four weeks, she made some headway, and eventually chose the most focused pupils to continue their instruction. Eight still participate in the regional fencing club.

To become a competitive fencer, pupils need to train for hours daily, Hayes says. But her current group is doing well, considering practice is only once a week. Because they get minimal physical education in school, Hayes says, she makes them skip, jog, jump and run when they come to fencing class. “I get hard on them,” she says.

“I got asthma,” Robinson says after a quick round of sprints and lunges.

“I got asthma, too,” Rodnetta Lewis chimes in.

Foilless, the pupils stand in the classic ready position: sideways, their dominant arm slightly bent and their other arm raised.

“En garde. Bend your arm. There you go. Advance and lunge,” Hayes commands, while they work their way down the floor.

After the pupils have worked up a good sweat, the real fencing begins. They unzip their red bags, which are shaped like soft guitar cases, and yank out the esoteric equipment associated with fencing: the white plastic breastplate, the single stiff glove, the white jacket and black mask, and then, the springy — but surprisingly heavy — foil.

“Can I take my barrettes out?” asks Nygeria Jiggetts, age 9.

Hayes relents. Barrettes adjusted, it’s time to duel. For the first time, Hayes shows her pupils how to put together the moves they’ve been learning into a sequence.

“Extend the arm and advance,” she says to Lewis, 11. She jabs at Hayes, who blocks the foil with a tinny click.

“Parry and riposte,” Hayes instructs her. “Parry.” This means deflecting an opponent’s blade; riposte is the rapid thrust that follows a parry.

(“I can’t breathe,” Jiggetts announces, as she fumbles with her face mask. Hayes ignores her.)

Lewis successfully smacks aside Hayes’ foil and lunges toward her.

After each fencer tries to match Hayes, the lesson is done.

“Salute,” the students repeat in chorus, with the traditional bow to the instructor.