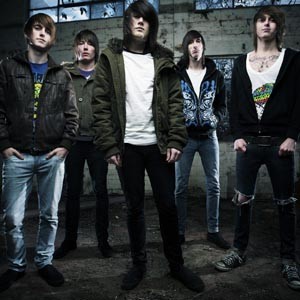 For the second time in six months, the five almost-identically coifed mates of Asking Alexandria are headlining a national tour, something they've never done in their own country. Hailing from North Yorkshire, England, the band is making as much noise in the glutted American metalcore scene with members' accents as they are with their guitars. It's something the band seems comfortable with.

“People are intrigued by where we're from and our accents and stuff like that,” 21-year-old guitarist Ben Bruce says. “People aren't used to it.”

Not that the queen's English translates in the piercing chorus of “The Final Episode (Let's Change the Channel),” the current fan favorite off the band's debut album, “Stand Up and Scream.” But a Pet Shop Boys-esque sophistication is certainly detectable in the cleanly sung interlude of “A Single Moment of Sincerity.”

Bruce says he thinks being British has “definitely helped [the band's popularity] to some extent.”

Exactly how much is difficult to say; the band's take on the once-distinctly American grammar of metalcore — Bruce describes it as a “European sort of trance [music] and a more American style of heavier hardcore” — is marked by a brutality equal to that of the genre's Yankee vanguard, enough to earn it the largest font size on the poster for this summer's 11-band Thrash and Burn Tour, which comes to the Hat Factory on Aug. 7.

“It's been going really well,” Bruce says of the tour. “We were really nervous before it. It's more of a metal tour compared to what we've been doing. We weren't sure how the audience was going to react to us but it's actually been really great.”

He credits the band's success with its ability to convey a message “that's not over people's heads.” (An example of an Asking Alexandria chorus: “Oh my God.”)

“If you're doing something completely ridiculous, people won't understand it,” Bruce says. “Simplicity is a hard thing to try to come to grips with.”

Musically, Asking Alexandria seems anything but simple — the technical guitar work, blistering drums and growling choirboy vocals tap the same screamo-ish vein as acts such as the Devil Wears Prada and Underoath, not to mention fellow British imports Bring Me the Horizon.

Still, Bruce maintains that the group is unique among bands from the United Kingdom.

“We've mixed trance music with more of an American sound, which not too many bands in the U.K. have done,” he says. “There's definitely a lot of heavy metal and hardcore bands in England — they're everywhere — but they're more straightforward and what you expect from a hardcore band. I think we have got a little more of an American sort of sound.”

If so, it's understandable: Bruce, the band's founding member, grew up in Dubai in the United Arab Emirates and seems to have been raised since he was 9 on a diet of almost exclusively American rock 'n' roll.

“I discovered Blink 182 one day, and the more I listened to that, the more I fell in love with guitar and drums and stuff,” he says. “Then I checked out Offspring, NOFX, and that led to Metallica and older '80s metal and I just came to the modern metal stuff.”

The result is that Asking Alexandria, which is signed to the American label Sumerian Records, and is armed with a name that's a sort of shrug-of-the-shoulder nod to the world domination of Alexander the Great, is significantly more popular with the 17-year-olds on this side of the pond, so much so that Bruce dispassionately references England not as “back home” but as “over there.”

“At the moment, I'd say yes — we're more popular in America,” Bruce says. “We've never done a full U.K. tour. We have sold out a few shows over there and this December we're actually doing our first U.K. tour.”

Judging by a recent comment left on the band's MySpace page, that's not soon enough: When are you coming back to england :'(..We want you back! Your OURS! Not America's :( xxxx.

Asking Alexandria will perform at the Hat Factory as part of the Thrash and Burn Tour on Aug. 7. Show time is 2 p.m. Tickets are $18. Other bands on the bill include Evergreen Terrace, Kittle, Greeley Estates, Born of Osris, Stick to Your Guns, Impending Doom, Motionless in White, Chelsea Grin and Periphery. For information visit hatfactoryva.com.