Eight stories above Byrd Park, beneath tons of bronze, a man makes music. 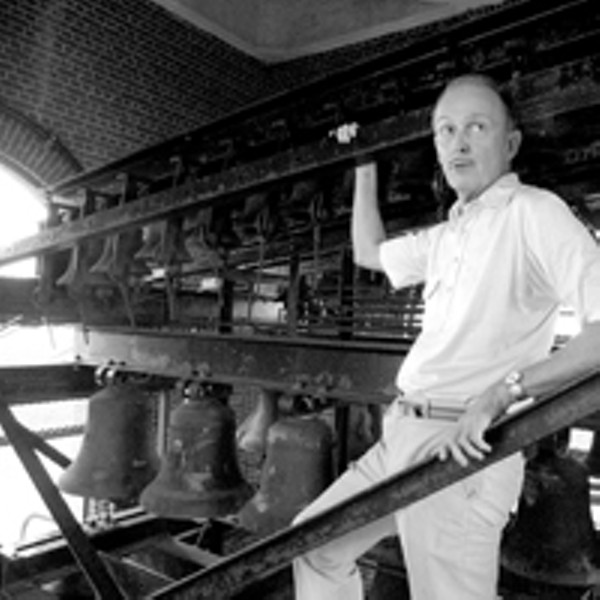 The World War I Memorial Carillon was built in 1931, and since 1960 the resident carillionneur has been Lawrence Robinson, who says he is “old enough to know better and too young to resist.” He’s also organist and choirmaster at Leigh Street Baptist Church and has been an adjunct keyboard instructor at VCU since it was RPI.

“When I was about three years old, I didn’t want to be a fireman or a policeman,” Robinson says, in the rotunda at the tower’s base. “I wanted to be an elevator operator. I came here to play, and I realized my ambition.”

He reaches for the handle of the Hoover-era elevator car, explaining, “a lot of people expect it to be automatic but it isn’t.”

He drives the elevator up, where it lurches to a stop at the eighth floor.

The door opens into a space that’s a blend of “Vertigo” and Quasimodo — 53 bronze bells, cast in England and sized from kitten to cow. They’re mounted in a cube of girders.

“My mother just had an absolute fit when she found out I’d been climbing up on the bell frame,” he says, moving monkeylike over the girders to point out features of the bells. If the Senior Olympics add parallel bars he’s ready. “It’s not as dangerous as it would look because there’s so much to hold on to.”

Each bell has a jujube-shaped clapper inside. He pulls one a couple of inches to strike its bell and make a deep, rounded bonnnnnng. “It’s not as loud as people imagine it must be,” he says, explaining that swinging church bells have clappers that strike harder.

A story below, underneath a thick ceiling, is the console, which Robinson calls the clavier. It’s entirely mechanical and looks like an old telephone operator’s station with wooden knobs sticking out. The only electronics in sight are used to operate the hidden cell-phone relay gear at the top of the tower. (The access fees help pay for the carillon’s upkeep.)

Robinson sits down and pulls on blue knit gloves with the thumbs, ring fingers and middle fingers cut out.

He launches into a peppy rendition of “Over There.” He strikes the knobs with the pinkies of cupped hands and works the biggest bells with pedals. The clicking and sliding of the tracker action is almost louder than the bells.

“This is sort of the worst place to hear it from,” he says. “You hear the big bells the best. You don’t hear the treble very well.”

When he plays in Byrd Park he emphasizes patriotic music because it’s a World War I memorial carillon. But he also plays the occasional hymn, and he’s made his own arrangements of classical pieces.

He demonstrates a little Chopin, and the opening of “The Swan” from “Carnival of the Animals.” It’s like a factory has suddenly burst into song.

On Sept. 11, he’ll perform on the Netherlands Carillon near Arlington National Cemetery.

On July Fourth in Byrd Park, he’ll open with the National Anthem and finish with “God Bless America.” Then he’ll join the Richmond Concert Band at the end of the “1812 Overture.” Looking out over the city from the eighth-floor balcony, Robinson says, “As soon as we finish playing, I run up here, and the fireworks are in front of my face.”

He adds that on some sunny days, he’s been known to sunbathe on another balcony a story up. And what does he wear? “A smile.” S

Robinson will play the World War I Memorial Carillon at a 6:30 p.m. concert Sunday, July 4, as part of the Dogwood Dell Fourth of July Celebration. Then listen for his bells at the end of the “1812” overture as part of the 7 p.m. performance by the Richmond Concert Band. Admission is free.

For more information, and for other Fourth of July celebrations, see our Night & Day section.