Can the littlest fish lure an audience to White Anchovie? 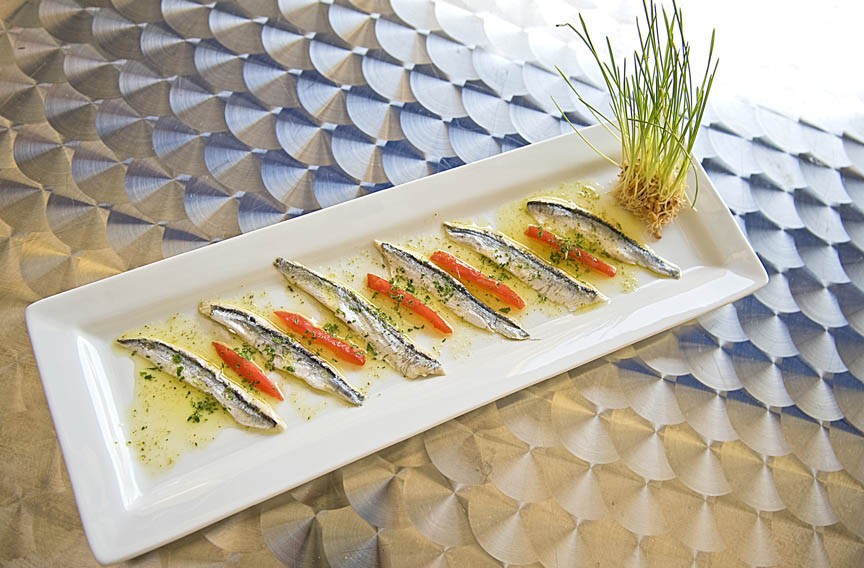 Naming a restaurant after a menu item seems akin to putting the weight of the globe on the poor shoulders of Atlas.

In the case of the White Anchovie, it's a tall order for such a tiny fish, especially one that isn't known as a people pleaser. The little swimmers we usually encounter on top of Caesar salads are brazenly salty, oily and pungent — tastes that may or may not attract hordes of hungry diners. At least, that can be said about the black or canned variety. But what about white anchovies, the milder, fresh versions? Could they buoy the fortunes of one modest seafood restaurant?

The creators of the White Anchovie seem to think so. The latest project from chef Matthew Tlusty, Todd Manley and some of Manley's partners from Pescados in Midlothian is a temple to the small, silver fish. Incarnations of it turn up on the walls, on the menu, on T-shirts, hanging from the ceiling, but not inside the capacious fish tank above the bar. The cerulean blue and gray walls, silver and white accents and chalkboard menus add to the sea-and-sky feel, while white linens, plush booths and attentive service keep it polished. The newly opened patio looks pleasant, but stays mostly empty in the heat. The only incongruous element is the real estate the place occupies: a Food Lion-anchored strip mall on a subdivision-heavy stretch of Lauderdale Drive.

While the seafood centered menu is full of other attractive options — pizzas, pasta, poultry, beef — patrons who feel compelled to try the restaurant's namesake may be disappointed. On one recent evening, neither the small plate nor the pizza that feature white anchovies are available, as the small purveyor never shows up with the day's delivery. The manager is profusely apologetic and offers a free pineapple rosemary-bread pudding as reparation. The flavors are unusual and lovely.

On another visit, there's a longer than anticipated wait for a take-out order of both dishes; this time, the supplier makes his delivery, but well after the restaurant has started dinner service. The simple appetizer of five fresh anchovies with lemon and olive oil is mild and not unpleasant, but could use a slice of crusty bread to make it more accessible. The pizza featuring chunks of the fish and slices of fennel is overly saucy and briny, tasting heavily of traditional anchovies.

Other seafood small plates are disappointing. The sautéed calamari is awash in capers and stridently astringent. The citrus shrimp seviche, suffering the opposite malady, is underseasoned and lacks zing. At $9 for about two bites, it's also overpriced.

Fortunately, the whole fish and filet preparations are delectable, and, along with the charming staff, make the drive out to Henrico worthwhile. The options on the blackboard change depending on supply, but if the whole bronzini is available, order it. There's something both wonderfully indulgent and thrifty about eating a creature head to tail, and in this case, every salty, crisp-skinned morsel is a treat. The only disappointment is that this particular fish is missing its eyeballs.

For those who prefer their fish without bones, the barramundi filet is a worthy choice, savory and firm-fleshed. Neither the fish nor meat entrees are a bargain, at more than $20 apiece.

Occupying its own category, "other excitement," the three-meat crepe lasagna gets high marks from the staff, and, not disagreeably, resembles lasagna pudding. Traditionalists may wish for crispier edges and a firmer consistency.

Diners looking for value will appreciate the pizzas, which include some of the kitchen's most delicious offerings, priced at $9-$13. Rosemary, which turns up again and again on the menu, is used to especially fine effect on the eggplant pizza, a delightful layering of eggplant purée, roasted red peppers and goat cheese. The French onion also earns rave reviews from other diners, while the pulled duck version is somehow bland, even with assistance from figs and gorgonzola.

The White Anchovie may not make converts of us all to the cult of the little silver fish, but there are plenty of other, more tasty, reasons to pay a visit. S