UPDATE: The July 14 Return of the Hit Squad show has been moved to the Showplace. 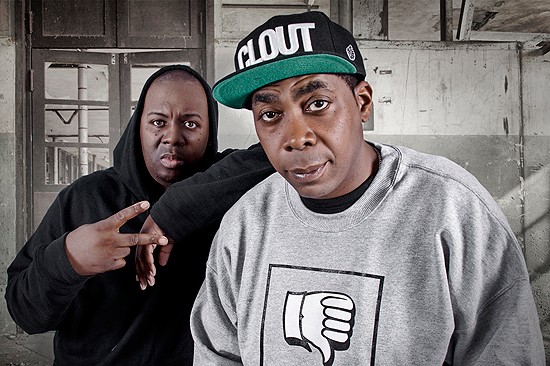 The golden era of hip-hop is over, and it isn’t coming back. But some of its greatest acts are still around and can bring it like they used to. Rap duo EPMD is back and touring with a reunited Hit Squad, a loose collective of rappers that includes Das EFX, Redman, Keith Murray and K-Solo, whose careers EPMD guided in the 1990s. Parrish Smith, the PMD of EPMD, talks about the power and responsibility of being a elder statesman of hip-hop.

Style: Why is now the time for a Hit Squad reunion?

Smith: I think the music had to take its course. It starts with us, then we created something that a lot of people wanted to duplicate, and they duplicated it and look what happened to the music -- it got way blown off. Now that it’s blown off, people want hip-hop [as] opposed to rap. They missed the golden era. They miss music with substance.

There are a lot of strong personalities in the Hit Squad. How did you convince everybody to come together?

Yo, to be honest, I was out there having fun on my solo run last year. Had about 30 countries under my belt. I was out there as some of the big festivals having fun, got so much love from the people and the fans. So me and Erick [Sermon, the other half of EPMD] and [DJ] Scratch went out there to test the track, we bodied 12 countries, and by the time we got back from there, we was ready. It just started to look like right where we left off, was right where people wanted us to pick up.

Speaking of today’s music, do you have any thoughts about R&B singer Frank Ocean’s recent announcement about his sexuality?

I’m just happy that he can be himself, because a lot of people can’t. We’re living in a time where we got 7.6 billion people on this planet, I ain’t just talking, I know what’s up. We live in times where if you want to succeed and move forward in life, then you must have an open mind and be conscious of other people’s feelings, as opposed to being close-minded and one-dimensional. It takes a huge person to come out on that level, to make it easier for a person that’s not as huge to be comfortable with himself.

As someone who’s witnessed a lot of the beefs in hip-hop, what advice would you give to singer Chris Brown and rapper Drake, who were involved in an altercation recently?

When there’s beef, there’s no money. Beef stops money, you know what I mean? You got artists that would love to be in the Chris Brown situation, and people in the real world, people working every day getting up at seven in the morning, putting in 40 hours, they’re like “Why are these guys mad?”

But if you’re in the industry and you know how it goes, you know exactly why. At the end of the day, you as an artist, the minute you start engaging in beef, the minute people are scared to work with you, then it just slows everything down. It slows your talent down, it slows your career down. And the next thing you know, you got a dude that look like you come behind you, and then bang!

You had a big commercial hit with a song called “Crossover,” about staying true to your artistic vision. Why do you think that song was so popular?

Yo, I thought that was a great example of listening. Because a lot of success and becoming famous is based on listening and learning to listen, you know? Erick and I had a different concept for “Business As Usual,” [we] were coming with a different [single], “Don’t Play Me, Play the Next Man,” ‘cause that’s where we were. But then Russell [Simmons] called us and was like, “Listen, the album is done. This is not the single. You release this single and EPMD is over.” So we didn’t argue with Russell at all. Erick and I just simply went into the studio and then next song we came up with was “Crossover.” And we dissed the crossover [artists] and it crossed over and became our only gold single. Because we told the truth.

When I think about EPMD, I think about a rap contest you judged here at a club called the Tropicana back in the day. You remember that?

Yes. Definitely. We went there to host a rap battle. Two dudes walked in with dreads, smooth. At the end, you know, there was real dope rappers, but Das EFX came in there, and they had a style, that, you know, clearly it was clear that these fellas had something! Once they left the rap battle at the Tropical [sic] in V-A, Das EFX came into contact with me. Then once we came off the road promoting “Business As Usual,” boom. The first song was “Klap Ya Handz,” then after that “They Want EFX” got developed and the rest was history.