A local sculptor helps doctors better understand the human body. Now she brings what she learned to her art. 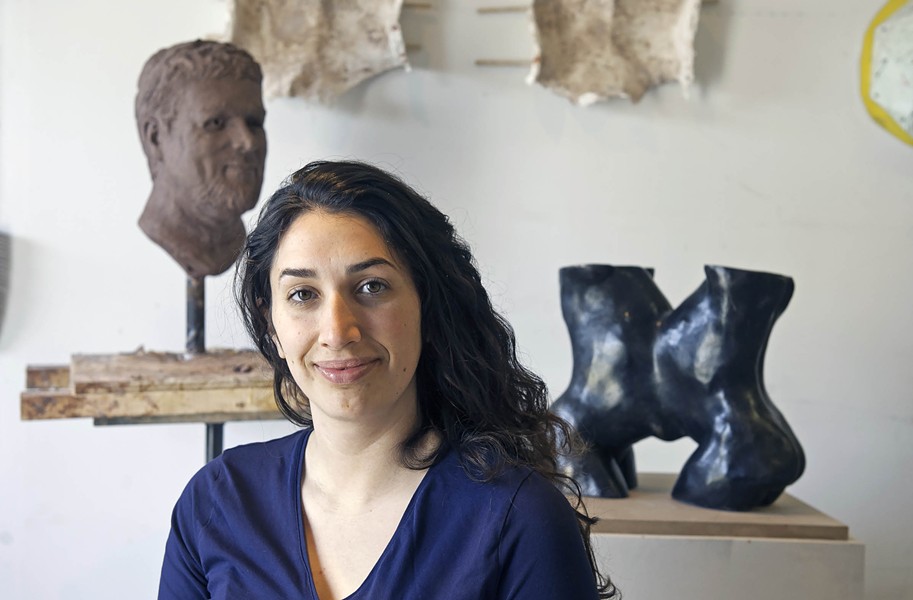 Scott Elmquist Sculptor Morgan Yacoe has a studio in Manchester where she works on human models for surgeons to study, while also turning casts such as the one to the right behind her of conjoined twins, back into art.

From the outside, Morgan Yacoe's studio doesn't seem like much. It's faring better than most of the surrounding structures on Hull Street, but the nondescript red brick building that the sculptor uses as a studio has seen better days.

But for Yacoe, playing with people's perceptions is all in a day's work.

Inside, the studio reveals treasures on the cutting edge of medicine. Yacoe has recently returned from a weeklong conference in New York, the bounty of which is four large clay busts on display. One of them is Yacoe's rendering of a female model; the other three were created by plastic surgeons as part of the conference.

Working as an assistant to a master sculptor, Yacoe helped surgeons mold these figures to teach them a better sense of space, proportion and perspective.

"When they're operating, they're operating on a face that's already there," Yacoe says. "What does a lip really look like? Working with clay and making one from scratch is the most effective way to know. It's hard, and you have nothing. All you have is clay and the model as reference."

Showing plastic surgeons how to sculpt is one of many projects that's been keeping the 25-year-old occupied lately. Though she graduated from Virginia Commonwealth University's acclaimed sculpture school only three years ago, Yacoe already has made a name for herself bridging the gap between art and medicine.

Science has always been of interest to Yacoe. She became familiar with the work of pediatric reconstructive plastic surgeon Jennifer Rhodes while taking pre-med courses at VCU. When she approached Rhodes they hit it off immediately. When Rhodes began planning a 24-hour surgery as part of a team to separate conjoined twins Maria and Teresa Tapia, she asked Yacoe to create a special model.

While models are nothing new in the world of medicine, what Rhodes was asking had never been attempted. The twins were joined at the abdomen, and each would be left without a large patch of skin where she was separated. To figure out how much skin would be needed for a graft, Yacoe took a mold and made a replica of the twins, adding layers of silicone to re-create the texture and composition of human skin.

Yacoe was impressed by the figure that the conjoined twins created. Just as she'd created art for science, she decided to take science back to art.

"When I pulled off the cast, I thought, 'This is incredible, and this is the only way we'd get to see this,'" Yacoe says. "It's so unique, and it's not them anymore. I wanted to communicate this experience for the surgery team and for the girls. Why not use this for a sculpture?"

Yacoe created bronze casts of the Tapia twins, which will be featured in a yet-to-be-named exhibit at VCU's new gallery space the Depot in August. The exhibit will highlight art created for the separation of the twins, including special dresses made by VCU's fashion department, and a car seat built by an occupational therapist.

"She's really found a niche in the market that was not being served, and she's helping surgeons with a bunch of different projects," says Rhodes, director of VCU's Center for Craniofacial Care at the Children's Hospital of Richmond. "She's taken up the concept of creating high-quality medical sculpture. … I think she's found a niche that has never really existed."

Yacoe is also working with VCU's Center for Human Simulation and Patient Safety to create medical models for surgery residents. The models are a way for people in the medical profession to get hands-on experience before they enter the operating room. One of the models for the center is a realistic replica of a breast on which students can practice performing biopsies.

"She's very professional, very enthusiastic, and she wants to get the models right," says Dr. Ellen Brock, medical director for the center. "We go through them over and over again. She's very willing to go back to the drawing board."

Yacoe says she's in the early stages of making a medical model of the entire female organ system.

"Having to re-create that shape was just so revealing," Yacoe says. "I never knew exactly what it looked like or the dimension. And I definitely didn't know it would create this beautiful sculptural form."

In July, Yacoe and Rhodes began holding sculpture workshops for VCU's plastic surgery residents. They're developing the workshops into a semester-long course for the fall. In March, Yacoe and Rhodes spoke at TEDxRVA, and recently gave a well-received presentation of their work to the American Association of Plastic Surgeons.

As much good news as Yacoe is having these days, there's always a risk when functioning in the world of medicine, as she found out in October. Six months after she and Rhodes worked on the separation of a second couple of twins, one of them died.

"It was hard," says Yacoe, who had met the mother. "It was heartbreaking."

But Yacoe is moving forward, and her mission has become clear: "My goal is for people to look at these sculptures that I've created and have this deep understanding of the body. There's so many things I didn't know about the body and my own organs before I did this work. Everything has to be exact. It has to be as realistic as possible. Every detail is important."

On the north-facing side of Yacoe's Hull Street studio is a weather-beaten sign, which says the building once was the site of Applied Science Laboratories. It's this place, somewhere between the aesthetic and the scientific, that Yacoe calls home. S