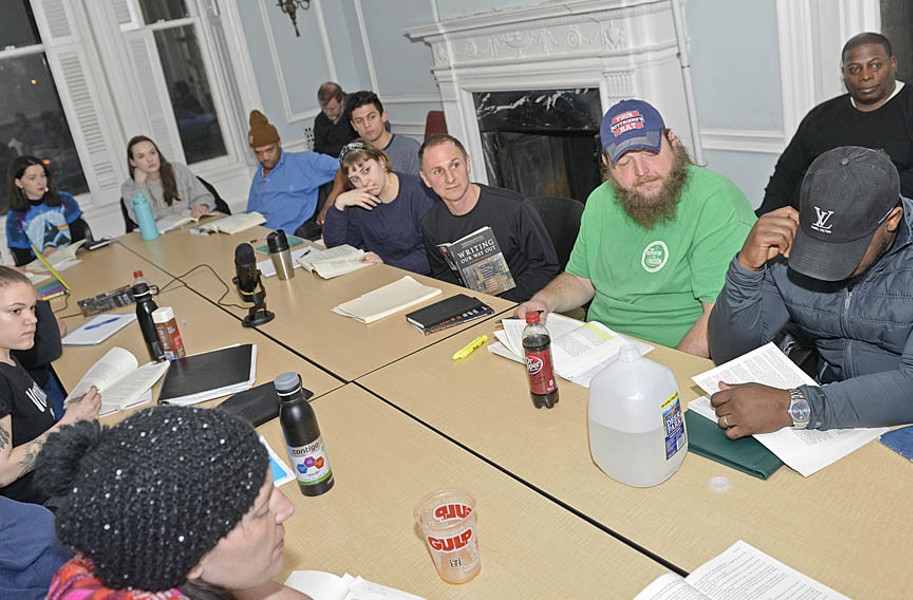 Whitney Ligon grew up in a happy, upper-middle-class home with loving parents, everything she needed and most of what she wanted.

She also grew up underneath the cloud of depression and anxiety. Drugs crept into her life in high school. By the time she was 19, her addiction had wreaked havoc on her life. Now 31, Ligon has been in and out of rehab and counseling for years, but she says a writing class has had more of an impact than any formal therapy.

"When you write something down you can be kind of disconnected from it. You don't necessarily have to own it," she says. "But then once I read it aloud to the other classmates, I have to own what I wrote."

Ligon is one of 10 low-level offenders chosen to participate in Writing and Social Change, a 300-level English class at Virginia Commonwealth University centered on memoir writing. Associate professor David Coogan teaches the class, which also includes 10 students from the university.

On a Thursday evening in early February, Ligon opens her composition notebook, takes a deep breath, and begins sharing a handwritten story with everyone crowded around a conference table. She's steady and composed, describing with intimate detail her battle with addiction and the life she built for herself and her family in recovery. Her voice starts to break as she reaches the final paragraph. It's a series of emails and a relapse that brought it all crashing down: She closes her notebook. The room is quiet, still, her final words hanging as Ligon's classmates register that, no, she's not telling us what was in those emails.

"I left it as a cliffhanger, and the reason I wrote that is because it's hard for me to share what I actually discovered in those emails," she says. "But it's forcing me to write about it, because I can't just leave people without answers."

Much as any English professor would appreciate the value of a well-executed literary device, for Coogan, it's about the authenticity and vulnerability of putting a personal story on paper.

"I'm more concerned about the writer than the writing," he says.

Coogan started volunteering at the Richmond City Jail about 13 years ago, teaching essay writing to inmates who qualified for classes. By 2015 he and 10 of his students published a compilation of their stories titled "Writing Our Way Out: Memoirs from Jail." It was working, he says. Men with criminal backgrounds were finding their voices and taking control of their lives. The next step was to bring the class to VCU's campus and open it to students who had something to offer their fellow classmates, and a willingness to share their stories in ways that are real and raw.

Coogan is quick to note that he isn't a therapist or a counselor, nor does he consider himself a creative writing teacher. While the Commonwealth's Attorney's Office collaborates with public defenders to determine which diverted students take the class, Coogan is deliberate when it comes to admitting VCU students.

Kelvin Belton, one of Coogan's first students at the jail, wound up behind bars 13 years ago for what he calls his "last round of foolishness." He says he doesn't even recall the charge. He also doesn't consider himself a writer, despite being published in "Writing Our Way Out."

"I just consider myself a person who's written a story," he says.

Now living in Richmond and working for a real estate company, Belton joins Coogan and these students every Tuesday and Thursday evening on campus. And for someone who claims he isn't a writer, he has a strong presence in the room — he listens intently while a young undergrad reads his essay about coming out to his father, then poses questions about the story as the student scribbles notes on his printed pages and his classmates nod thoughtfully.

For Belton, pushing the class participants with provocative and challenging questions is the key to writing a story that's transformative.

Belton's role in and out of class is that of a mentor. He helps the diverted students with their writing, but also with daily life.

"I'm able to show them what this has done for me and my patience, for me and my growth," he says. "I try to help them feel a little more comfortable with their stories."

When class ends, Belton addresses the group before heading out into the cold.

"You might be sitting there hearing people's stories and think, 'Oh man, I can't compete, I can't write like that,'" he tells the group. "Don't let what somebody else shared discourage you from writing your story. The truth is relatable. Everything matters."

As a former inmate with drug charges in his past, it's easy to understand how Belton would relate to the students diverted from jail. But despite the age difference, he's found the gap between them and the VCU students to be virtually nonexistent, and their stories to be remarkably similar.

"I've learned so much more from the VCU students than I thought I would," Belton says. "I don't think they or the diverted students look at each other as one or the other. It's not just certain types of people with certain backgrounds that go through things. There's no categories when it comes to struggles in life." S