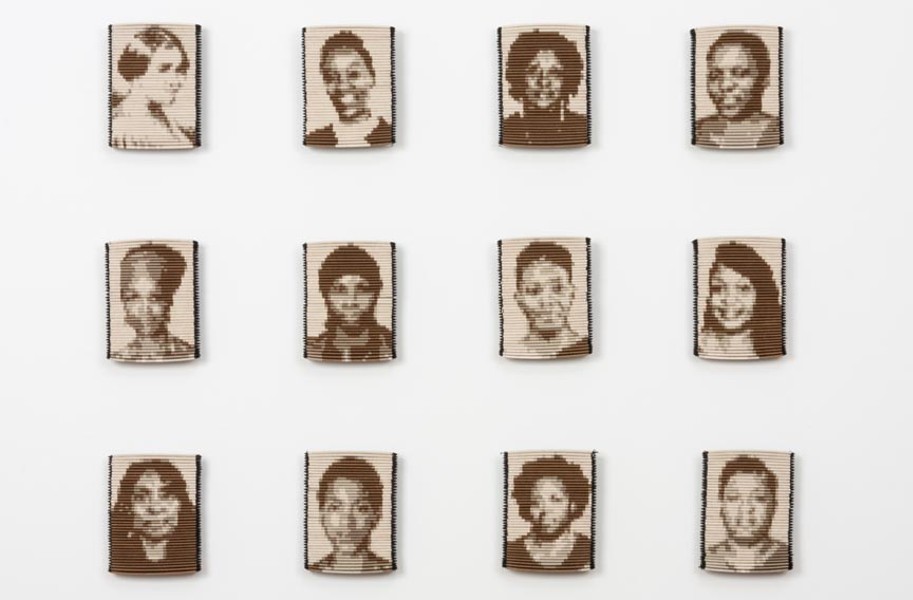 Artist Sonya Clark, chair of the department of craft and material studies at VCU, uses hair and textiles for her assemblage stories. “Hair Tapestries,” pictured, is composed largely of black combs.

When she was 4, a freshly painted wall tempted Sonya Clark to pick up a pencil and drag it across the damp surface, a moment she considers the birth of a lifelong fascination with materiality. Her grandmother, a tailor and milliner, soon began teaching her to sew.

"She'd say, 'I'll show you how to stitch and I'll tell you a story' so I'd pay attention," Clark says of the beginnings of her love for fabric arts and storytelling. "I still thread a needle like she taught me."

The final piece of the puzzle fell into place when her family lived in Washington near the grand stone house of the Republic of Benin's ambassador's and his 14 children. She and her sister would visit, dazzled by the surroundings but entranced that there was always someone there who wanted to fashion their hair into elaborate African hairstyles.

In "Same Difference," Clark's first solo show in Richmond and 30th solo show nationwide, she continues her exploration of identity through the metaphor of hair. She's long used hair, including her own, and such accessories as black combs as the subject and medium of her art. The central collection of the show is "Hair Craft Tapestry Series," a dozen portraits made of cotton thread woven around small black combs to resemble sepia photographs. Eleven portray local African-American hairdressers, and one pictures C.J. Walker, the first self-made female millionaire in the United States, who made her fortune creating products designed for black hair at a time when women couldn't even vote.

For years, Walker was considered an inspiration to black hairstylists. But she fell out of favor with some after having made her fortune with hair-straightening products. Clark calls this attitude "misplaced disrespect" because of the social activism conducted by women such as Walker in hair salons, away from the suspicious eyes of men in power. The choice of combs as the vehicle for the women's portraits is part of the point. It's a deliberately ironic and thought-provoking medium for images of black women.

"These black, fine-toothed combs are ubiquitous," Clark says. "They're intended for straight-haired people. Men use them more than women. They're supposedly disposable, but they'll be here forever. And they're about keeping every hair in place."

Similarly, "Uncurl," a sinuous strand of black combs that winds its way straight down the wall before becoming a coiled round that sits on the floor, speaks to the issues of straight and curly hair but using a comb suited for only one.

The masterfully metaphorical "Cornrow Chair" began as a found object — one that Clark calls a testament to the power of an art object being like a sponge. After reupholstering the chair with bright and handsome red fabrics, she stitched black cotton thread braids to the back and between the legs along the sides and back. From the front, the braids are hidden as part of an intentional commentary.

"It references the Emancipation Proclamation and the importance of African-Americans in the development of the U.S.," she says. "It's like looking at the grand house of a plantation but you can't see the back 40 where all the real work goes on."

At first glance, "Hairbows (Dreadlock and Hairbow)" appear to be nothing more than stringed instrument bows. But one is strung with thick, straight, Asian hair, considered the gold standard of straight hair, which has been dyed blond. The other is strung with Clark's hair, which has been felted into a black dreadlock. How different do straight and curly hair sound musically? You can find out at Clark's gallery talk next month, when both will be used in performance of the national anthem. Here's a hint: They aren't the same. S

"Same Difference" by Sonya Clark runs through April 5 at Reynolds Gallery, 1514 W. Main St. For information call 355-6553 or visit reynoldsgallery.com. A gallery talk will be held March 27 at 7 p.m.