Having Conquered the Internet With Ease, Cats Return to the Art World 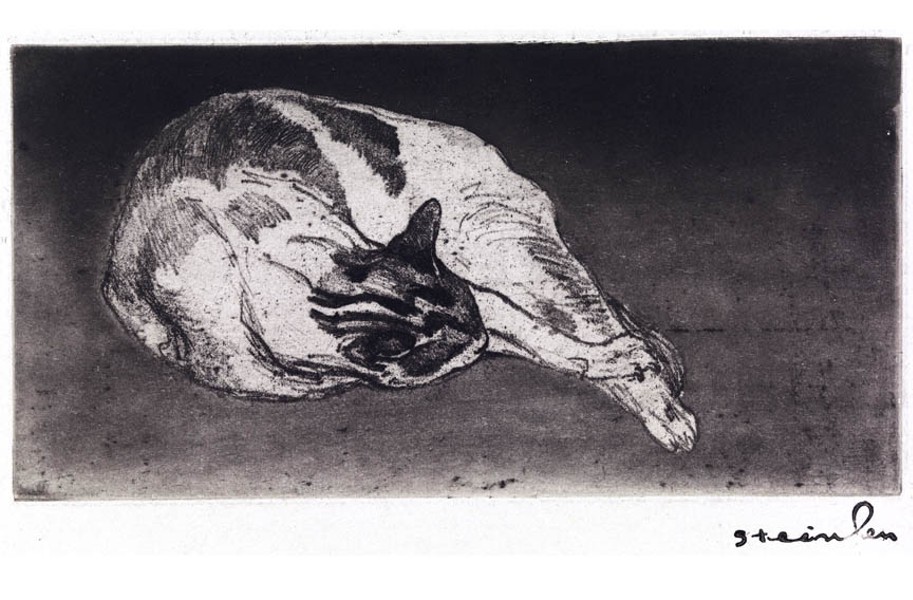 Virginia Museum of Fine Arts “Reclining Cat, Head Resting on his Paws,” a 1902 drawing by artist Théophile-Alexandre Steinlen, is one of many felines featured in the VMFA’s “Steinlen: Cats.” The exhibit is a collaboration with concurrent University of Richmond exhibit, “Steinlen: Humanity.”

When New York's Museum of the Moving Image produced a video exhibit in 2015 called "How Cats Took Over the Internet," the executive director declined to say whether the exhibit was or wasn't art.

With the Virginia Museum of Fine Arts' "Steinlen: Cats" exhibit, curator Mitchell Merling has no qualms about saying that it most definitely is art. The feline-themed show combines realistic images of cats with highly stylized ones, while also reflecting Théophile-Alexandre Steinlen's growth as an artist who experimented with a range of styles.

Once Steinlen moved from his native Switzerland to the bohemian Parisian suburb Montmartre, he quickly became part of the regular scene at the Chat Noir, a cabaret that attracted Parisians of all backgrounds. Included in the exhibit is one of the most iconic posters of all time, Steinlen's 1896 "The Black Cat Cabaret," considered one of the best examples of 19th century graphic art and recognizable to many even if they've never heard of the artist.

"Cats were a major preoccupation for him and a symbol, because as creatures who interact with us, they bring out human emotions in us," Merling explains, but can't resist adding, "They also make wonderful art nouveau lines with their tails and whiskers."
At the turn of the century, posters were plastered all over the streets of Paris, making them accessible for all social classes to admire. Although technically the posters were advertisements for things as varied as pasteurized milk, nightclubs and chocolates, they made names for artists such as Steinlen and Henri Toulouse-Lautrec because they were seen by thousands of people daily.

A charcoal drawing, "Colette and Cats," shows Steinlen's toddler daughter, a frequent model, with her arms around her morning bowl of cereal, while four cats sitting on the table stare her down in an attempt to get their share. Merling says it was likely a preliminary drawing for the poster "French Company of Chocolates and Teas," in which Colette is joined at the table by her mother and the company of felines reduced to just one, although it appears to be just as insistent.

The Virginia Museum show, co-curated by Merling and Virginia Commonwealth University student Taylor Dean, is a collaboration with the concurrent University of Richmond exhibition "Steinlen: Humanity." That exhibition, co-curated by UR Museums executive director Richard Waller and student Sofia Nicolet, focuses on the artist's increasing concern with political, social and humanitarian issues over the course of his lifetime, culminating in monumental posters produced to raise concerns and funds for World War I victims.

"The visitor to both exhibitions gains greater insights into how the artist responded to his times," Waller says of the artistic differences represented by the affectionate look at domestic cats and the later humanistic response to harsher realities.

Steinlen's feline archetypes were so influential that they filtered down to popular culture. In "Awful Demise of a Goldfish," Steinlen drew a series depicting a black cat approaching, circling, peering into and finally falling into a goldfish bowl. Merling says it's likely one of the first examples of showing fast motion by blurring the subject.

Fast forward four decades and a photograph in the exhibit shows Disney animator Eric Larson working on concept art of Figaro the cat for the 1940 film "Pinocchio" and on his drawing table is a copy of the 1933 book "Steinlen: Cats and Other Animals."

Steinlen's ability to work in various mediums — the exhibit includes drawings, illustrations, prints, even a bronze sculpture of a cat — combines with his knack for working in a variety of styles including art nouveau, japonaiserie and realism. It makes for a wide-ranging exhibition despite a narrow focus on subject. The dynamically arranged show likely will appeal to more than just cat lovers because Merling sees it as less about art history than human history, of which, he reminds us, cats are a part.

"We're at the point where there are parodies of cat videos online. There's a cult quality to them," Merling says. "But cats were only one part of Steinlen's oeuvre." S

"Steinlen: Cats" is on display through May 13 at the Virginia Museum of Fine Arts, 200 N. Boulevard. "Steinlen: Humanity" is up through March 30 at University of Richmond Hartnett Museum in the Modlin Center for the Arts.