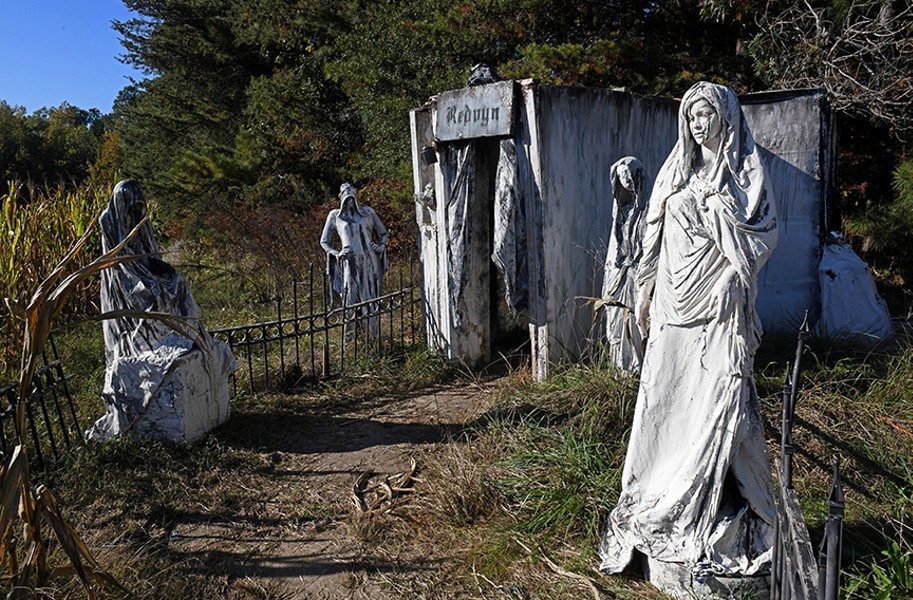 Matt Wade isn’t particularly into violence, darkness or gore, not to mention that he scares extremely easily. But then he started dating a haunter.

For the uninitiated, haunters are the people whose job is to terrify visitors at haunted attractions. Whether doing it at a corporate theme park or a farmer’s field, most are passionate about the roles they assume at these events, which generally only run for a few weeks during October.

In 2009, Wade bought his first movie camera and honed his skills with day jobs as a videographer for an ad agency and later, an NBC affiliate. Along the way, he created six episodes of a situation comedy, posting them online. When he began doing a series of short human-interest videos, one of them was for the Red Vein Army and its annual haunted attraction in Ashland.

“The more I looked into Red Vein and what it was, the more I realized that they could be the subject of a full-length feature documentary,” Wade says.

“We didn’t believe him at first because he wasn’t the first person to approach us about a film,” says Kitty Barnes, Red Vein’s vice president of operations. “But he came back with a detailed outline of the shots he wanted, who he wanted to talk to, the full structure of the film.”

Since the beginning of the year and going through December, Wade and his crew will be following the Red Vein team, shooting all the mayhem that goes into the creation and execution of the haunt. The documentary will also showcase the humanity behind the haunt and the myriad reasons people choose to be part of it.

Before putting down roots in Ashland in 2016, Red Vein Army toured during October providing entertainment at other attractions as a way of building a reputation, establishing their own folklore and encouraging people to visit Virginia’s many Halloween events. The work paid off, Barnes says, because now it’s considered a top-rated haunt on the East Coast.

Much of Wade’s attraction to Red Vein had to do with the storytelling and theatricality components of the haunt. One thing that sets it apart from other seasonal attractions is the deep-rooted folklore it has developed over the years by taking bits of real stories and weaving them into its own. Employing a more theatrical bent and a goal of immersing guests in a darker, more sinister story, the attraction eschews many contemporary Halloween clichés.

Each year, the story is altered, developed and tweaked to further the narrative.

“Seeing what they did last year showed me they approach it like live theater,” Wade says. “I want that to come through in the documentary: That it’s not just passionate people in makeup, it’s performance art.”

The more than 1,600 haunted attractions popping up nationally every year prove how much people enjoy paying to be scared. There’s even a trade show in St. Louis where groups like Red Vein can see merchandise — masks, animatronics and sample haunts they can tour — take workshops in makeup and costuming or classes in managing a haunt operation. When the Red Vein Army hits the road for St. Louis, Wade will be right there filming the journey. Once back, he’ll start capturing the crew as it starts the major work of reinventing the storyline, sets and scares that will coalesce in Ashland come October.

Barnes, a veteran of all the blood, sweat and tears required to pull off the Red Vein haunt every year, knows she can’t count on looking her best during filming. “Summer, we’ll look great, sweating and covered in filth,” she acknowledges with a laugh. Wade says in preparation, he’s taken up a major fitness regime, “Just so I don’t die in the cornfields filming in July.”

Making a documentary, especially one with the scope and breadth of a yearlong creative endeavor, takes some funding, so between shoots, Wade is busy trying to build awareness and anticipation for the project. He’s set up an Indiegogo page, hoping to entice fans of local filmmaking and all things haunted to contribute however much or little they can to the effort. Once filming wraps up at the end of the year, the film will be in post-production for about six months. He’s hoping to premiere it at the Ashland Theatre and take it on the festival circuit before securing a distribution deal to show it nationally.

Despite this being his first foray into a feature-length film, Wade says he’s always been a doo-it-yourselfer about creating content.

“We’re hoping people are excited about this and help us raise our budget to do it,” he says. “But we’re punk rock and always done things DIY, so one way or another, we’ll get it done.”