by Chris Dovi and Jason Roop 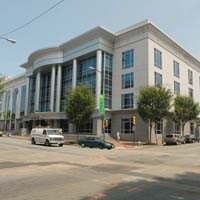 As part of a career seminar at the University of Richmond Tuesday, Richmond Times-Dispatch Executive Editor Glenn Proctor answered questions from young journalism students about how to break into the news business.

Perhaps the students should have been asking how to stay in the newspaper business.

Back in his fourth-floor executive suite at 300 E. Franklin St. today, Proctor's helping a sizable percentage of his newsroom staff make sudden exits.

Possibly more than 20 reporters, editors, copy desk editors, layout and design artists, and other support staff -- among them some of the paper's top winners at the Virginia Press Association awards banquet in Norfolk two weeks ago -- were told yesterday that they were scheduled for a meeting with Proctor today.

Though there was nothing in their notifications related to layoffs, reporters were taking no chances. They headed out for a final beer to commiserate with colleagues or scrambled to put together lists of the potential fallen. One former reporter described it as a newsroom "bloodbath."

That list totals as many as 28 newsroom or editorial page staffers, according to sources. They provided names of people who confirmed receiving notice of meetings with Proctor. Among the well-known bylines facing the top editor today are Rex Bowman, Bill Geroux and Carlos Santos, all of whom are longtime state desk reporters.

Veteran reporter Robin Farmer, whose husband is columnist Michael Paul Williams, packed the contents of her desk last night, according to sources.

Longtime movie reviewer Daniel Neman, who was also covering Richmond's arts and culture scene, confirmed to friends that he was laid off at 9 a.m.

So sweeping are the layoffs in areas such as layout that one former staffer speculated that there will no longer be enough artists to cover the hours needed to produce a daily newspaper. By eliminating Santos, Farmer, Geroux and Bowman, the paper also eliminates most of the remaining veteran reporting staff.

Sources also say the newsroom was recently informed of changes that largely do away with the food section and real estate pages. Times-Dispatch spokeswoman Frazier Millner clarifies with Style that Wednesday food coverage will stay with a "change in format," including going to black and white, and that real estate information from Sunday's front page will move to other sections of the paper.

"Flexibility and repackaging give us new options for advertising and readership growth," Millner writes in an e-mail. "These changes are designed to make maximum use of resources and space while continuing to offer our readers content they tell us is important to them … and advertisers as well."

As for the newsroom's union, sources say heads of the Richmond Newspapers Professional Association were scrambling yesterday to determine whether layoffs were planned. Union leaders have been summoned to speak with Andrew Rome, a Media General corporate attorney.

This round of layoffs marks the latest in a series, the most recent of which occurred near the Christmas holiday and saw the departure of five newsroom staffers. During the past three or more years, readers of the paper have watched the departure -- either through attrition or layoff -- of such high-profile writers and columnists as Randy Fitzgerald, Douglas Durden, Ray McAllister and Betty Booker. Pulitzer finalist Mark Holmberg left on his own, disgusted with the direction of the paper and assuming a new career in television news reporting.

Media General, the Times-Dispatch's parent company, announced a reorganization of its corporate business structure last week, described by company officials as a move to a “Web First strategy.” Divisions between the company's television, print and Internet holdings were broken down and replaced with five geographic markets.

That strategy is in line with remarks made by T-D Publisher Tom Silvestri in recent years, in which he's speculated on a merging of the company's mediums, with the daily print newspaper ideally scaled back to three times a week or fewer, in favor of an online presence. But "there are no plans to eliminate days of [newspaper] production," the Times-Dispatch says in a press release today announcing the layoffs and eliminated positions.

The paper, which recently acquired Richmond.com, also recently announced it would end its inrich.com online presence and replace it with Richmond.com. Inrich, over recent months, has undergone an evolution toward an online news aggregator, providing links to headlines for other online publications, including local bloggers and Style Weekly.

The Times-Dispatch has announced that company wide, 31 open positions have been eliminated and 59 employees laid off. "This is not a day I ever wanted to see come," President and Publisher Thomas A. Silvestri says in the release. "I thank each and every departing employee for their years of valued service that helped publish Richmond's daily newspapers."