Bridge in Forest Hill Park to be named after slain family. 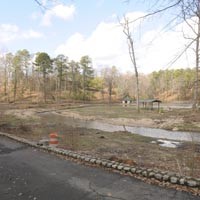 It's been more than four years since their last happy afternoon here. The sisters, ages 9 and 4, were brutally murdered New Year's Day 2006, along with their parents, Bryan and Kathryn, in the basement of their home on 31st Street.

The Harvey family's friends and neighbors hope to take a step in the long healing journey with a proposal to dedicate a soon-to-be-rebuilt bridge in Forest Hill Park in honor of the family. The bridge was destroyed by Tropical Storm Gaston in 2004. Members of the Friends of Forest Hill Park have received blessings from extended members of the Harvey family, and from City Council President Kathy Graziano, who plans to propose an ordinance to allow the bridge naming.

“The park is the place where the family played and learned,” Graziano says, “and a memorial for lives cut short can help, in some small way, to heal the pain we all still feel.”

Paige Harvey, Bryan's sister, has not been involved in the naming effort, but says she approves. “Part of the reason they moved over there was because of [the] proximity to the park,” she says. “I think they'd be delighted with it.”

The neighborhood group fronting the proposal says its cost to the city will be nothing. After a donation by local artist David Jeter, who sold a painting dedicated to the Harvey family, the group has $500 to purchase a plaque for the bridge, says Friends of Forest Hill Park co-president Curry Nelms.

Pending City Council approval, a May 22 rededication for the bridge and lake is planned. “It's something positive that can come out of a tragedy,” Nelms says.