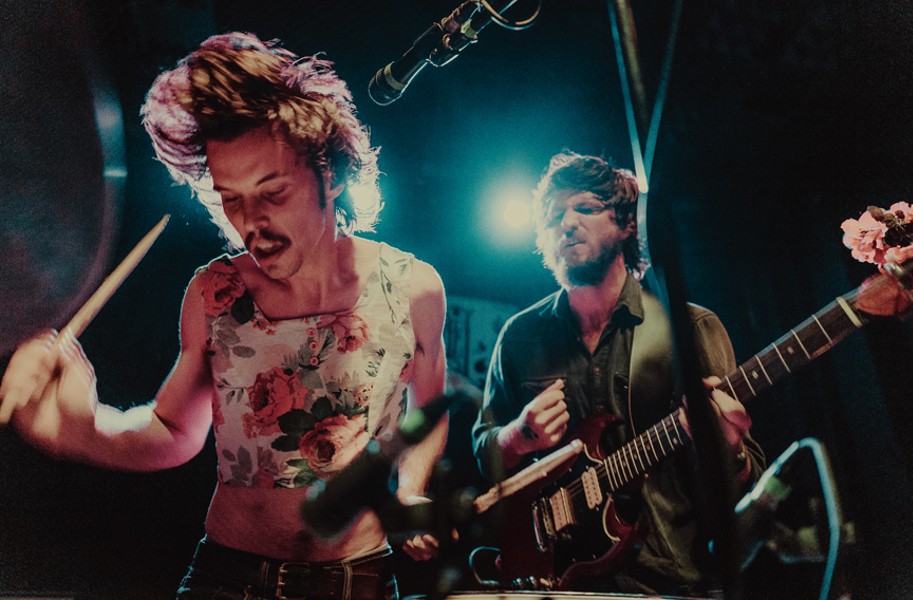 Musicians Jeff Gorman and Jake Cochran wanted to tour the mid-Atlantic in a different way. So in 2012, they did a nine-day bike tour, stopping in Harrisonburg, Staunton, Charlottesville, Richmond, Fredericksburg, Alexandria and finishing in Baltimore.

Accompanied by friends, they hauled a bike-powered generator in a bike trailer. At shows, two people biked in place on a tandem bicycle to run the generator that powered the sound system for the show. The seeds were planted for what would become their experimental indie rock duo, Illiterate Light.

Gorman's grandfather was a jazz drummer while his uncle Steve is a drummer and founding member of the Black Crowes, so he grew up drumming. In high school, he picked up the guitar because he wanted to write. Cochran studied drums in high school, but by the time he met Gorman at James Madison University, he was playing guitar more than drums and working on his songwriting.

Both are passionate about life outside of music — agriculture, biking, building community and social justice — but by the time they graduated in 2012, they'd decided to focus all their energy on it. It was when they started touring heavily out of state that they got comfortable onstage.

"That meant making errors, playing wrong notes, good shows, bad shows, having a guitar amp crap out midset, singing with strep throat, playing while exhausted or playing to an empty room in a cold city," Gorman says. He says getting comfortable with their imperfections allowed their shows to improve because they were less reactive to each unexpected moment and more present and focused on enjoying every second of it.

While they'd started as a trio in February 2015, by November that year, they'd transitioned to a duo. The band's name comes from a Wilco song called "Theologians," which has a line: "Inlitterati lumen fidei / God is with us everyday / That illiterate light / Is with us every night." Gorman saw the phrase illiterate light as representing a force or energy that was big and loving, inclusive and full of mystery.

Although the band is based in Harrisonburg, the two feel drawn to Richmond.

"There's something special about Richmond and I think it comes down to the people," Cochran insists. "We've played all over the East Coast the last three years, but for some reason Richmond opened their arms to us like no one else."

When it came time to record, choosing a studio was a no-brainer. Impressed by records coming out of Montrose Recording by local bands such as Camp Howard and the Wimps, the band got a nudge from local musician Charlie Glenn of the Trillions.

"After hanging a few times, he told us pretty plainly that we needed to record with his friend Adrian [Olsen] at Montrose," Cochran recalls. "He said, 'You need to capture your live sound and energy and your current recordings aren't doing it."

The duo already had a few days of studio time booked in Nashville with Vance Powell, who'd worked with Kings of Leon and the White Stripes. But it was several months off, so they booked two days at Montrose with a few half-finished songs. "We came out three days later with five incredible tracks that we just couldn't believe," Cochran says. "We fell in love with that studio and felt we finally found the right team with Adrian and Charlie co-producing."

They wound up booking another week a few months later and finished with a full length album that was mixed by Powell.

Nashville has become a second home for Illiterate Light because of the support they've gotten from its scene. It's meant meeting musicians they love and respect and finding out they're welcoming and supportive of young bands.

"Tom Blankenship, the bassist for My Morning Jacket, caught one of our shows at an East Nashville dive bar last year and now he comes to a ton of our shows there. He's really supportive, which means the world to us."

At the upcoming Richmond gig, the band will be playing songs from the new album, which is fitting, not just because the songs are fresh right now, but because they came to life at the Camel over the past year. Touring follows with the East Coast in August, the Southeast in September and Midwest in October.

"Believe it or not we've got more studio dates booked with Montrose," Gorman admits. "We just finished this album, but the next one is already brewing and Richmond is a great place for us to keep the ball rolling." S