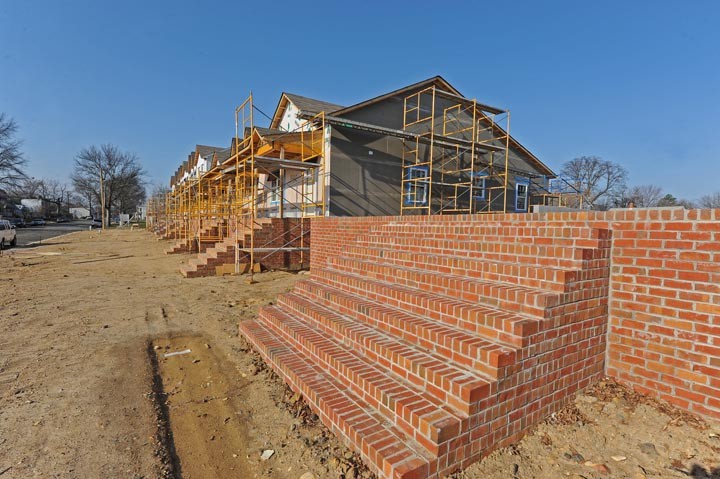 With the sudden departure of Executive Director Leisha LaRiviere two weeks ago, what's next for Metropolitan Richmond Habitat for Humanity?

The nonprofit is the local chapter of an international Christian organization that builds homes for low-income families.

In LaRiviere's five years as Habitat's head, she won praise and media attention for speeding up the pace of building and expanding the nonprofit's budget from less than $2.5 million to more than $10 million in 2010.

Instead of Habitat's standard practice of building one house at a time, LaRiviere championed renovation projects and developing entire communities. "Making History with Record Growth," the newsletter trumpeted in the spring of 2008, listing 114 homes planned in eight neighborhoods.

That pace has abruptly slowed. Habitat has completed but one house since the beginning of the year. Two more are scheduled to close before June 30, board Chairwoman Laura Lafayette says. The organization's budget this year is $6.4 million.

LaRiviere's flagship project was the Pillars at Oakmont, Habitat's first-ever multifamily development. It's a planned block of 15 row houses at T and 33rd streets in the East End, next to Oakwood Cemetery. The cost of the project was estimated at $4 million; the city agreed to kick in $225,000. The development was supposed to be completed by early 2009, then summer 2010, then June of this year.

Nine houses have been framed out with roofs, doors and windows; three are little more than brick steps and crawl spaces; and work hasn't begun on the remaining three. The multifamily model was new for Habitat, Lafayette says, "and we haven't progressed the way we've wanted to." One former employee says that attached homes are difficult to build with volunteer labor because of the skills required.

Work continues on the Pillars project, Lafayette says: "We're going to complete the nine units, and then we have to pursue funding for additional house sponsors." Habitat also will rethink plans to sell some of the homes at market rate, while reserving others for buyers at different income levels, she says.

In the last two and a half years of LaRiviere's tenure, 17 people left the organization or were fired, former workers say — several because they questioned the feasibility of the pace of development. In 2006, LaRiviere was ousted as president-elect of the Junior League in a controversial vote by its board, who kept the details of the decision private.

LaRiviere hadn't returned a call from Style Weekly by press time. Lafayette wouldn't comment on staff turnover or the reasons for LaRiviere's departure, saying only that the board was "deeply grateful" for her service and appreciates her energy and enthusiasm. The board is seeking an interim leader for the nonprofit.