A new exhibit strings together a dozen veteran local artists with a dose of surrealism. 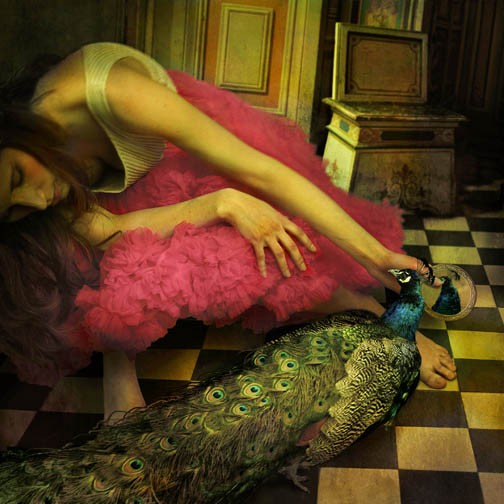 Upstairs at the Main Richmond Public Library, there's a seldom-viewed stash of works on permanent display by three talents synonymous with Richmond's mid- to late-20th-century art scene. Explosively colorful and abstract paintings by husband and wife Alvin Hattorf (1899-1976) and Helen Hattorf (1900-1977) hang on the mezzanine of the Dooley Wing, one of the city's glorious (and unheralded) art deco interiors. Hanging in an adjacent space are handsome etchings by printmaker David Freed, a master who's still going strong.

I think of this trove of Richmond-produced art while I wade into "Herald 1," an exhibition at the library featuring works by 12 other serious artists and photographers.

The exhibition is exhausting, because while the works are challenging and highly satisfying, curator David R. White had the material for 12 separate, one-person shows. If there's a common thread through this widely disparate work embracing a range of media, it is strong design and a dose of accessible surrealism.

John Heroy shows five elegant, tightly cropped, color photographs of details of weathered urban residences. But the images aren't about place. They explore texture and chance associations. "Old Vine, Iron Fence, and Twisted Garland" contrasts a thick wisteria vine that has threaded its way around a balcony railing, with a garland of Christmas tinsel that's wrapped around an iron fence: binding by nature, binding by human hands.

Medford Taylor's work is the most delicate and sublime of the photographs here. Three of four color digital prints feature butterflies and flowers against a stark white background. But in "Falling Silver," two leaves, one light blue, the other an exquisite, incandescent tone of silver, come to rest in beads of water. Perfect.

Curator White offers four photographic collages that mostly use seascapes as playing fields. Upon these he places human figures and a strong, three-dimensional architectural matrix of colorful lines to establish a tremendous sense of three-dimensional space.

Among the photographers, Anne C. Savedge's collaged works are most playful. In each piece an image of a dog, trained to jump into water, is superimposed in midleap over a postcardlike city skyline. There's Chicago, Miami and New York, but the ambiguity of "Over Key West" makes it the most poetic and satisfying of the set, with its rich shades of red and blue.

What is it with painter Diego Sanchez and water towers? Two of his four works in "Herald 1" feature the skeletal structures. But he also uses seemingly arbitrary elements, such as a canoe and a classical vase, as flat centerpieces and focus to contrast with his often masterful drawings in paint. If you zero in on Sanchez's brushwork that emerges behind the water tower in "Ode to Dr. Seuss," you'll be treated to a demonstration of deft and beautiful painting technique.

Andras Bality is always up for melding scenes of Virginia's natural landscape with a tinge of surrealism. And while his paint strokes have gotten tighter in recent years, he's still full of surprises. "Libby Hill Sans Silo" depicts the iconic vista of the James River from the vantage point of Libby Hill in a dreamy way: no industry, only rowers sculling downstream in the distance.

Brad Birchett's four large acrylics are aggressive. "Family Tree" is dominated by a thick, raised ax in a swirl of what? Matter? DNA? There is a suggestion of a fetus in the lower left of the picture. "Dogmata" is more abstract, but equally powerful.

Kathleen Markowitz's four mixed-media pieces include personal photographs but don't even suggest nostalgia because her drawing prowess is so fresh, assured and exquisite.

Pam Fox, at the top of her game, is represented by three photographic pigment prints and combines watercolor, charcoal and graphite. Her combination of natural and mathematical imagery is so achingly delicate that you feel privileged to be able to share her discoveries.

Finally, Sarah Masters who has dazzled in recent seasons with her technical virtuosity in capturing natural subjects, shift to a highly architectonic tack. Her 10 richly applied pastels mostly use closed-door imagery as a point of departure. The titles reinforce a yearning to get past them: "Transit," "Threshold" and "Portal."

For folks considering collecting works by Richmond-connected artists as well as for veteran connoisseurs, "Herald 1" is a must. Where else will you find so broad and deep a showing of work by a dozen veterans in one place? Enjoy. S