Works by veteran local artists explore a variety of themes at the downtown Richmond Public Library.

I can't attest to the book limit at the Richmond Public Library, but you'll be delighted if you check out works by 12 regional artists on display in the library's Dooley Wing. Most of these talents have been honing their vision and craft for a number of years and are at the top of their games in the "Herald 2" exhibition.

Respected printmaker Mary Holland is showing six monotypes of tremendous visual clarity. Each belies what at first seems a simple presentation with a deeper message. "Radioactive" combines print, collage and drawing in a playful dance of light blues and pinks, but the work contains a powerful environmental warning.

Although Maruta Racenis' four large charcoal drawings are realistic landscapes in the English landscape tradition of John Constable, of her four works, "Inlet" stands out. It becomes almost Zen-like as the negative spaces become as powerful and meaningful as the recognizable waterway and foliage.

Amie Oliver's five ink-on-paper pieces may be among the smallest in the exhibition, but they imply a more expansive space — an underwater seascape with hints of waves, shells and maybe even a jellyfish. And although there's a rich overlay of colors, her works contain poetic translucency.

By contrast — and they hang on an opposite wall — Alyssa C. Salomon's brilliant color photographs of backyard environments deliver a bitch slap. Her unflinching but witty eye captures a range of toys, equipment and objects that fill our contemporary lives. In "Woodland Heights, May 2014," a plump chicken has entered a carport to remind us of simpler rural pleasures.

Similarly, photographer Paul Thulin focuses on everyday objects, but closes in and tightly crops his shots to transform mundane subject matter into objects of contemplation. Metal bookends, cellophane tape and a card catalog in respective works have been blown up to heroic dimensions, becoming things monumental. "Card Catalog," an inkjet print, implies an elegant pyramidal temple in a vaguely Asian setting.

Matthew P. Shelton and Mary Anne Hensley also are presenting abstract works but stick to grid systems. From a distance, Shelton's two entries, "Civil War Times Illustrated, November 1977" and "Civil War Times Illustrated, April 1982," appear to be neatly aligned photographic strips. But closer inspection shows a performance of sorts, the forced disintegration of print publications into mush. If history is past tense, he seems to say, so are printed periodicals. Hensley is intrigued by the possibilities of newer media. Her monochromatic inkjet prints on transparent film are a play on QR codes — the letters stand for quick response. But apparently she rendered her scratchy marks with felt-tip pens and by carefully overlapping strips of film and mounting them on a board, creating deceptively sculptural forms.

Thomas Condon's archival pigment prints may be the most abstract works in "Herald 2," but they're engaging and action-packed. Do you know that effect when driving through a commercial intersection during a nighttime rainstorm, windshield wipers going full-steam? And the blur of lights — blues and reds and yellows become pixilated? Condon captures such colorful and fleeting moments. 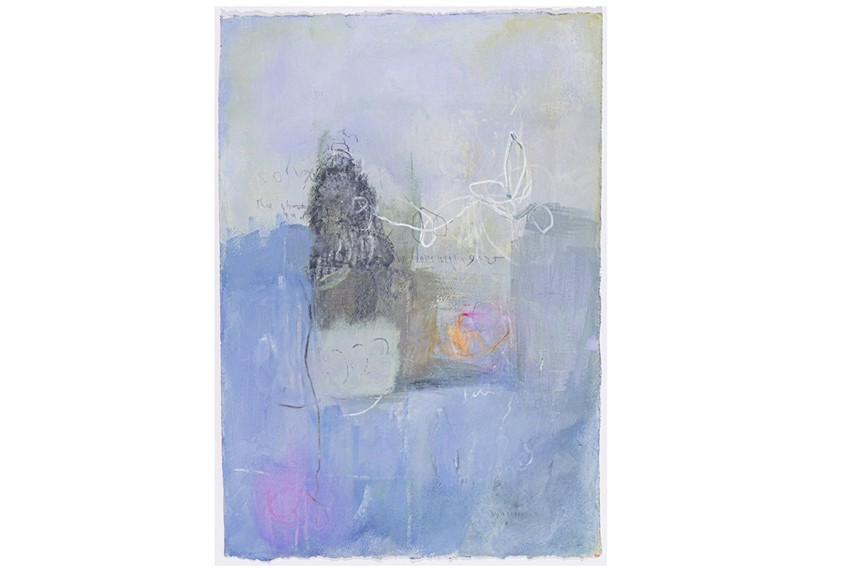 Lee Saloutos is much more literal in his memory pieces, which consist of large, single-image photographs of deserted rooms. Vacant architectural spaces are a popular theme among the cognoscenti these days, but this gifted photographer takes us to abandoned buildings in Nevada for a fresh take on musty and dusty environments. The control of lighting and sense of depth is masterful in Saloutos' four pictures.

The six photo composite works by Cyane Lowden are among the most literal works in "Herald 2." A strong design sense, subtle coloring and overlaying textures combine to create a sense of magical realism.

Finally, Kathryn Henry-Choisser uses horticultural imagery in five monoprints that recall how early photography was employed for scientific examinations and recordings. Her pastel-toned works are meant for sheer enjoyment.

There're lots to see, things to contemplate and serious talents to become acquainted with in this exhibit. Veteran Richmond photographer David White brought these considerable talents together. And for rewarding, one-stop viewing, the show shouldn't be missed. S