More than a dozen (new!) ways to eat and drink yourselves into a late summer haze. 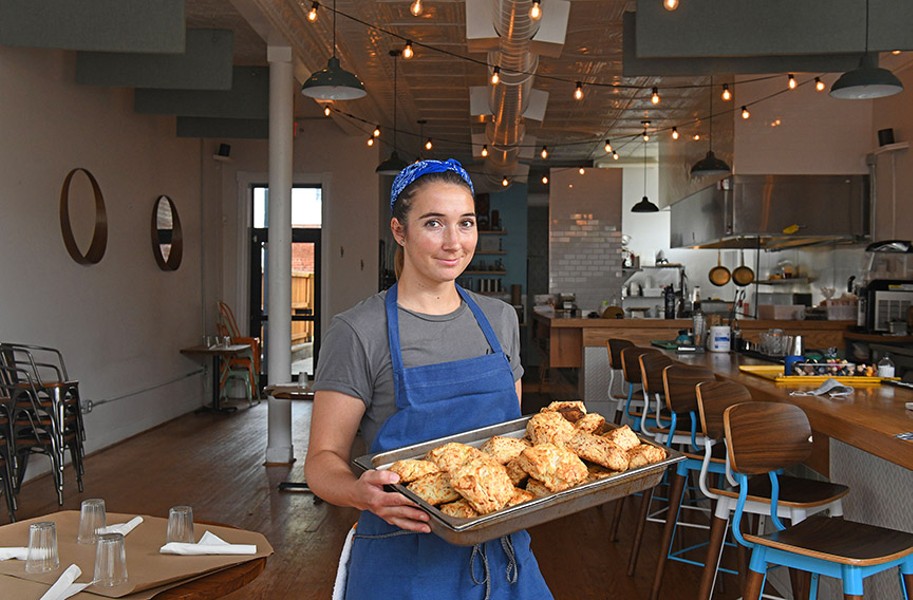 The election is looming. Schools, teachers and parents are facing difficult decisions as distanced learning becomes the new norm. Torrential downpours and devastating heat remind us that yes, it is August. Hurricane season beckons.

There’s a lot to worry about, sure – but as we forge ahead through the last four months of 2020, why not seize upon a little cautious optimism? Despite a global pandemic, new restaurants are opening. Roaming concepts are popping up like wildfire giving foodie folks a bright spot to look forward to each week. Local fundraisers and bake sales and creative collaborations are bringing to light important issues. And chefs are making some damn good food. Check them out:

The RVA Black Farmers Market held its first market Saturday Aug. 15. Founder Navi Johnson, aka V the Writer, says she was inspired by her mom, who started her own garden this spring. “With stores shutting down, people had to get back to what they know – self-sufficiency,” Johnson says. A resident of Church Hill, she knows all too well about the lack of accessible food in the city: “People in my community go to gas stations to get food.” Expect to find 20 plus vendors at 1700 Blair St. – from farmers hawking local produce to bakers, candle makers and skin-care gurus – the third Saturday of every month through November. The market will run 9 a.m.-3 p.m. and Johnson hopes to add an adjoining space for local independent artists to showcase their work as well.

The Jasper is all over the pop-up game. The bar may be temporarily closed, but it’s keeping busy by playing host to friends like Mediterranean and Jewish American pop-up Susie and Esther, Philippine food truck Auntie Ning’s, Pizza Bones, and Slurp Ramen. Place your orders online, to-go only. store.jasperbarrva.com.

Richmond Bakers Against Racism has announced their next bake sale. Details are to be announced but expect a Halloween iteration with multiple pickup locations around the city. This summer, 36 bakers contributed to the sale and Richmond Bakers Against Racism donated $1,734 to the following nonprofits: Nolef Turns, RVA Food Justice Alliance, Richmond For All, Neighborhood Resource Center Fulton and the Jackson Ward Youth Peace Team.

The cult of tiki has never held so much appeal. “This is a chance to get away from reality,” says Pineapple Trade Co. founder Ted Oh. “I want people to be stimulated by the beautiful food, the beautiful drinks, it will be a getaway for two hours.” Oh, an industry vet himself, says the tiki concept is a collaborative effort. He worked with Postbellum chef Will Burgess to help refine the menu, and Derek Stroud and Justin Bell are assisting with libations. Oh notes that he’s looking for a rotating staff of folks, and would love to have anyone seeking employment inquire about joining the tiki team. The company holds its first event Sunday, Aug. 30, from 5 to 11 p.m. on Postbellum’s rooftop. Tickets cost $15 and include your choice of food. A handful of tiki drinks will be sold a la carte along with canned beer. Tickets can be purchased online.


This month, Longoven restaurant launched window-service bakery Fitzroy and Herrera. If you haven’t had a chance to visit for lunch, plan a visit ASAP. Head online to preorder and peruse the menu – think tomato tarts, prosciutto sandwiches and chewy cookies – or order at the counter from 11 a.m. to 3 p.m. Thursdays-Saturdays.

Brookland Park Market opened this August in the North Side, offering sandwiches, hot dinners, prepared meals, homemade desserts, beer and wine. “We’ve been selling out of a lot of things, we’ve had to increase food orders, right now we only have one computer in the back,” says market owner Sean Lynch, a bit out of breath between the lunch and dinner rush. He and brother and market co-owner Pat have both “been in the industry for a while now” and decided to take the plunge on opening their own space. The market itself is lovely, but Lynch says they’re not having any dine-in customers right now, just to be on the safe side. So order your risotto with summer veggies and skirt steak and crabcakes to go.

RichWine’s monthly tastings at Urban Hang Suite are back. Here’s how they work: Sign up for the tastings by following the link on RichWine’s Instagram. Each tasting includes four wines and the team will run two sessions, one at 6 p.m. and one at 7 p.m. The event is socially distanced and spots are limited, first-come, first-serve.

Vasen Brewing has teamed up with Capsoul Collective and Chililay to release Cohesion, a hazy hoppy double India pale ale with proceeds benefiting nonprofit Happily Natural Day. “We live in a community that has been directly impacted by the Black Lives Matter movement and as a team we wanted to use our beer and platform to give back to our community,” says Vasen brand director and director of events Jamie Frieling and founding brewer Tony Giordano. The beer is made with hop strains from South Africa, including African Queen and Southern Passion Hops, which give the beer its juicy profile. The third hop, Azzaca, is named after Azaka Medhe, the Haitian god of agriculture. “We try to connect our ingredients and naming approach to folklore and mythology,” Frieling says.

Ruby Scoops is set to open soon in Brookland Park. Owner Rabia Kamara has been holding pint pickups to give the city a taste of what she’ll be bringing to the North Side. Follow Ruby Scoops Instagram for the latest on where it’ll be scooping and ice cream sandwiching next.

Hatch Cafe is now open inside food and bev incubator Hatch Kitchen, serving a limited lunch menu – a handful of sandwiches, sides and desserts — Mondays-Fridays 11 a.m. - 2 p.m. Hatch Kitchen executive director Austin Green says it would like to eventually add breakfast and workshops to the calendar, and it plans to hold weekly Saturday pop-ups, too. “There are a fair number of people working on-site plus we’re in a food desert,” Green says. “We want to provide the larger community with quality options for lunch.” Follow its Instagram for updates.


Barrel Thief is teaming up with Truckle Cheesemongers for a custom-made cheese board pickup at the wine shop every Thursday. Truckle owner Maggie Bradshaw says the idea for the wine and cheese pairing started about a month ago when a customer ordered a custom basket from Truckle and inquired about wine. Since the cheesemongers don’t stock the good stuff, the customer went through Barrel Thief for a bottle. “I called Barrel Thief to tell them about the cheese she ordered so they could pair accordingly,” Bradshaw says. “We started to talk about a way to work together.” Voila. The boards cost $30 and selections change each week – each board includes three cheeses, a charcuterie, crackers, nuts and fruit. Place your order online.

Smashed RVA is now popping up around the city with divine Seven Hills Farm smash burgers topped with the requisite American cheese, shredded lettuce and mayo, plus other fun additions. Founder Michael Marshall says running his own concept like this has always “been a dream of mine.” While his place of employment is closed due to the pandemic, Marshall figured he’d best spend his time slinging single and double patties to all the smash burger devotees out there. The burgers sell out fast whenever the griddle gets hot, so follow Smashed on Instagram for the latest and where it’ll be.

Recently launched RVA BBQ Tours takes ’cue lovers on a delicious trip around the city. The caravan-style, guided tour takes guests to three barbecue joints, switching up locations every weekend. Each stop includes more food than you could ever eat – smoking hot ribs and collards from Inner City Blues were a recent favorite – and Richmond native Ryan Martin is a delightful, knowledgeable host. Martin brings your meal to your blessedly cool car and you eat from a plastic tray whilst listening to pre-recorded interviews between Martin and the highlighted pitmasters. Pretty nifty. Tours take two to three hours and run every Saturday.