Mural to capture feelings Richmonders have for beloved but ill-fated grocery chain. 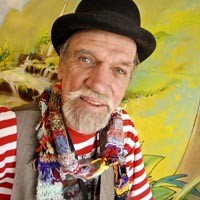 Kuhn wants the planned mural to capture the feelings Richmonders have for the beloved but ill-fated grocery chain. Functionally, that means an illustrated timeline of Ukrop's history. Kuhn is soliciting proposals: Where should he paint the mural?

Highlights may include scenes depicting the Ukrop family's ancestors migrating to the United States; Joe Ukrop, founder, asking his father for help to start the first store; the chain's relationship with local suppliers.

Kuhn, who describes himself as “an active shopper” at the chain, says he collaborated with Ukrop's on the graphic design of its first Web site and designed the trophy for the first Ukrop's 10K race on Monument Avenue.

Kuhn has other, slightly fuzzier memories: suggesting to Jim or Bobby Ukrop, or both, that the chain organize its products alphabetically. He also recalls co-judging a country club bathing suit competition with a Ukrop family member.

More than that, there's Kuhn's artistic, even spiritual, admiration for its business philosophy. “There's an art to merchandising,” he says, “and they nailed it.”

Jennifer Simmons, Kuhn's manager, says the practical details of the mural — its exact scenes, where it will go and how it will be paid for — are up in the air. Simmons says Kuhn has not contacted Ukrop's to discuss his plan.

Simmons invites the public to offer suggestions for the mural's location and content. (Kuhn envisions it at the Greater Richmond Convention Center.)