Artwork would include 23 scenes of grocery store memories. 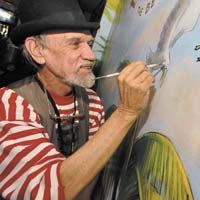 Two weeks later, and we've gotten only six e-mails, one of which was a duplicate, which makes five. After Style Weekly solicited feedback on Richmond muralist Happy the Artist's plan to paint a public mural commemorating the legacy of Ukrop's Super Markets (Dec. 30), only a few readers e-mailed their suggestions — a not-so-Happy response rate, though an online glitch may have prevented some responses from getting through.

But Happy, whose real name is James P. Kuhn, and his manager, Jennifer Simmons — who says she and Happy have received more than 15 e-mails and phone calls in response to the project, in addition to many in-person conversations — are undeterred.

Happy stopped by Ukrop's headquarters on Maywill Street on Monday to drop off a proposal for the mural, including 23 scenes it would depict, addressed to Robert S. Ukrop, the chain's president and chief executive.

Ukrop wasn't in, but his assistant, Susan Rowe, contacted Style Weekly by e-mail to say that “we are honored, but as I shared with [Happy] and Ms. Simmons, we are not in a position to consider supporting the project.”

“Right now we are working on the transition concerns and issues of our associates as well as the many moving parts one might expect with the sale of a company,” Rowe writes.

Simmons says she understands: “They have a lot going on, with you know, people losing their jobs.”

Still, after leaving Ukrop's headquarters, Happy proceeded to drop off another proposal package at First Market Bank, where James E. “Jim” Ukrop is chairman. Around the same time, Jim Ukrop's executive assistant, Ellen B. Fleming, informed Style in response to a query for comment that Jim wasn't available.

Happy, take heart. The five e-mailed suggestions Style received for the mural — well, except one — were encouraging:

“I think this is a great idea,” wrote Jim Austin, “Good luck Happy,” Paul Hammond said, and “Happy knows and understands what makes the world go around,” according to Katrina Blankenship.

As for Happy's preferred location for the mural — the Greater Richmond Convention Center — Simmons says Happy has broached the subject with the convention center's general manager, Michael Meyers. The result of their conversation? “He asked Happy to get him a proposal also,” Simmons says.