The mixed-use Westhampton on Grove fits its groove. 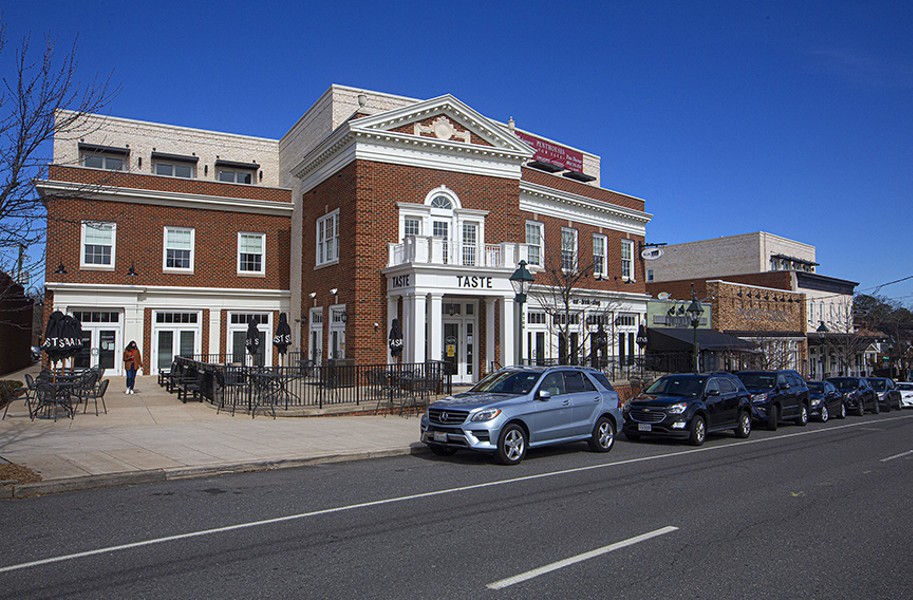 As statues were hauled unceremoniously from Monument Avenue last year, developers and contractors hustled to complete another memorial of sorts in the West End. The honoree was an unlikely recipient of such a gesture: the Westhampton, a demolished Depression-era neighborhood landmark that had stood since 1938 at 5706 Grove Ave.

The lasting appeal of the elegant theater, designed by architect Adolph O. Budina for developer Morton G. Thalhimer, and furnished partially with colonial period antiques by his wife, Ruth Thalhimer, was due to convenience, ample parking and nods to 18th-century Virginia, British-based decor, also the tastes of many households that were settling in the neighborhood. Over time, the cinema became as deeply entwined in Richmond’s bedrock culture as Monument Avenue. Memories are only enhanced by thoughts of dining before or after a film at Phil's Continental Lounge or the Peking, both steps away.

In a best-case scenario, the developers of the mixed-use Westhampton on Grove complex, Stephan Cametas and Jason Guillot, might have preserved the cinema -- or just its façade -- and woven it into the overall design. Consider how the former Colonial Theater on East Broad Street became the frontispiece of the Theatre Row office building. But every brick and classical detail at the Westhampton was torn down. This was to the consternation of neighbors and others who’d long patronized the theater. But after more than 30 community meetings, often testy, Cametas and Guillot shifted gears. Their envisioned mixed-use complex of four floors and 12 apartments morphed into a smaller plan of 49,800 square feet with mixed uses in two buildings on three floors, including luxury penthouse condominiums.

Behold Westhampton on Grove. And it is good.

A handsome interpretation of the former theater facade (minus the marquee) anchors the new project near the western end of its frontage along Grove. This three-story, red brick section creates a faithful statement with well-articulated quoins, a three-part window, heavy cornices, and a cartouche within the pediment with flanking urns.

Wisely, the developers engaged Glave & Holmes, a Richmond-based firm that focuses on keeping classical architecture relevant in the 21st century. Its clients include Montpelier, the estate of James Madison, the Virginia Museum of Fine Arts and Washington & Lee and Christopher Newport universities. But equally important to recapturing the spirit of the former theater was the way in which the architect understood how the balance, rhythm and scale enhanced sense of place. In addition to paying homage to the former theater, Glave & Holmes avoided a path that many firms take when expanding on the theme of an existing landmark – or in this unusual case, the memory of a landmark. The architects didn’t use only the exterior building material of the original structure, in this case red brick, across the entire project. When this is done the additions give no honor to the older building. It stretches them out, ever thinly, like pulled taffy.

Glave & Holmes also embraced the broader spirit of other architecturally varied structures near Grove and Libbie. These have evolved for over three-quarters of a century to establish a somewhat jagged rhythm of street fronts. That’s OK. The architect understood that if you listen to an environment, it will guide you. Each section of Westhampton on Grove is varied in its height and somewhat different in exterior facings. Along Granite, the four architecturally distinct sections include one where round-arched windows channel the blind arches that once graced the facade of the former theater. Taylor & Parrish was the contractor.

A structural element that might have more fully integrated the structure to its site would have been to step the buildings down along Grove to Granite to reflect the sloping grade. At the corner of Grove and Granite, the new building is raised a number of feet and creates a slight visual disconnect with the sidewalk. This was probably a budget consideration to rest the entire first floor on a single building plane and pad.

In 1938 the Westhampton's opening film was “Happy Landing.” It featured ice skating star Sonja Henie, Ethyl Merman and Don Ameche. Up here in 2021, the film’s title aptly describes the saga of designing and building Westhampton on Grove.