An incidental history of the collage work of early VCU professor Jack Solomon. 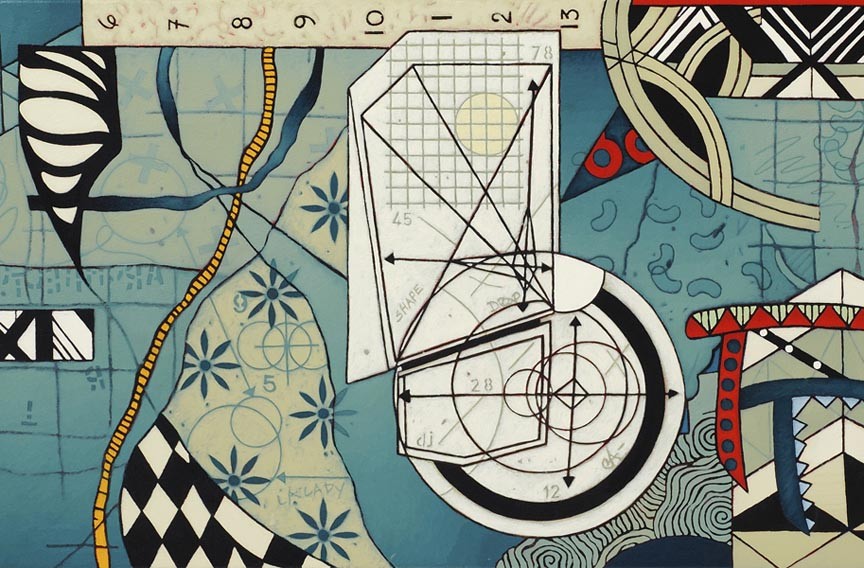 D. Jack Solomon plays by his own rules. Walk into his upstate New York studio and you'll see a man wearing surgeon's magnifying glasses who starts every painting with a red, not white background.

With a career spanning more than half a century, his new show at Gallery A, "Incidental Dramas for the 21st Century," is just the latest installment for an artist who doesn't want a tombstone. But if he did, he'd want it to say, "I always did what I wanted to do."

Sitting down with the 80-year-old, surrounded by his work from the past decade, is a lesson in history — of Virginia Commonwealth University and his own.

Style: How did you end up at VCU?

Solomon: Back in the academic year '67-'68, RPI was becoming VCU. The department of painting and printmaking hired 16 full-time faculty, making VCU one of the largest art schools in the country overnight. It was an exciting time. I flew in from California to D.C. and took a little plane to Richmond. It flew low, it was spring, and all I could see were azaleas and dogwoods in bloom. So gorgeous. I said to myself, if they offer me this job, I'm going to take it.

Most of the faculty was from Virginia — Jim Bumgardner, Theresa Pollak — and all were very active doing their own thing. There was lots of creative energy and it was pretty exciting. I stayed seven years.

The thing was, in '74 you could move around and get teaching jobs in other places. I had already started showing in New York City. One motivation was I looked around and saw some older people still making the same art. There was the excitement thinking that's where I should be. It was more of a career move. I never left Virginia because I didn't like it.

How'd it work out?

It was affordable to live in New York in 1974. I sold my house in Bon Air, and with another artist, Chuck Magistro, bought a building in Tribeca. We each put in $17,000 and I put in another $17,000 renovating it. We were the first building in Tribeca to get a certificate of occupancy. It was like landing in the middle of new energy. I started teaching at the Brooklyn Museum School of Art where I had students from Brooklyn who'd never been to Manhattan. Very strange. In '82, I was hired at Parsons School of Design and taught there 28 years, retiring from there two years ago. I realized if I wanted to focus on my art, I had to stop teaching.

I went through a lot of periods where I tried different things. Much of my work was informed by what I saw in NYC. The big change for me came in 1986 when I moved up to Greene County in upstate New York. By the early 2000s, I'd found my niche, developed through using collage elements as components in my earlier work. I made collages using black and white photocopies and then add color to them for contrasting elements. That developed into what I'm doing today.

Seeing things in the context of the whole, structuring in terms of feel, not objects. It's how I deal with these complex configurations. Even though there's a lot of stuff going on, they solidify. Everything happens to support the structure of it. Whimsy has come back into my work. I'm very happy and content with what I'm doing now. I don't see where I made bad choices. I'm only willing to go into my later years doing what I'm doing and seeing where it goes. I never stay in one spot ever. S