Happiness is a Warm Doobie

Charlie Brown and his friends grow up and act out in “Dog Sees God.” 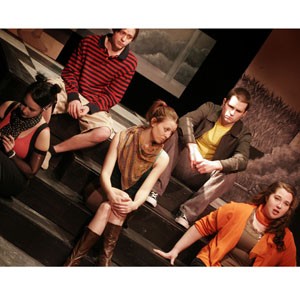 While people have often explained Charles Schultz's classic comic strip “Peanuts” in terms of Christianity, I've always held the notion that Schultz was an existentialist.

Doesn't the main plot of the comic strip involve Charlie Brown's angst over the freedom awaiting him, like the notion of talking to the Little Red-Headed Girl? Don't the blockhead and his peers live in a world with silent or nonexistent adults, implying that either God doesn't exist or is unresponsive?

And despite all of Linus' waiting for the Great Pumpkin to show, like Godot, the figure never arrives.

Some of this logic bleeds over into Bert V. Royal's “Dog Sees God,” a satire of sorts on the “Peanuts” world running at the Firehouse Theatre. In the play, the gang has moved on to high school, and now has to cope with issues like violence, homophobia, and alienation. Charlie Brown, or “CB” in this show (copyright law is a funny thing), is trying to cope with the recent demise of his dog, Snoopy.

A dead beagle is the least of his troubles. His ex-girlfriend “Van's Sister” (Lucy) now finds herself on the other end of the psychiatrist's desk after trying to burn the Little Red-Headed Girl, “Van” (the ever-philosophic Linus) is now a stoner, and “Tricia” and “Marcy” (Peppermint Patty and Marcie) are now game for threesomes.

Kyle Cornell stars as CB, and is completely sincere in his portrayal of the round-headed kid as he tries to figure out if Snoopy's gone to heaven. His best friend is “Matt” (Pig-Pen), portrayed with frat-boy overtones by Ben Hill. Matt is now a ladies man, germaphobe and bully. “Beethoven” (Schroeder) is the awkward pianist, frequently finding himself the victim of both Matt and CB's bullying. Played with authenticity by Bryan Leach, Beethoven is tortured and angry about his unpopularity. He eventually becomes the object of affection for both CB and his sister (Sally, who has now gone Goth), played by the effortlessly funny Audra Honaker. After CB and Beethoven kiss at a party, the rest of the school turns against them.

Under the direction of Billy Christopher Maupin the whole cast turns in excellent performances in spite of the uneven script. The first third of the show reads like the screenplay of a teen sex comedy — written by a 13-year-old with no concept of what sex is really like. Once the play focuses on homophobia it finds its energy, and manages to be quite funny while doing so.

Adam Dorland's inspired scenic design features black-and-white paintings of “Peanuts” inspired backgrounds, further emphasizing the fact that these characters have come out of the comic strip and — good grief — taken on a life of their own.  Flaws and all, it's a good show. S