Wife wears the tool belt in this family 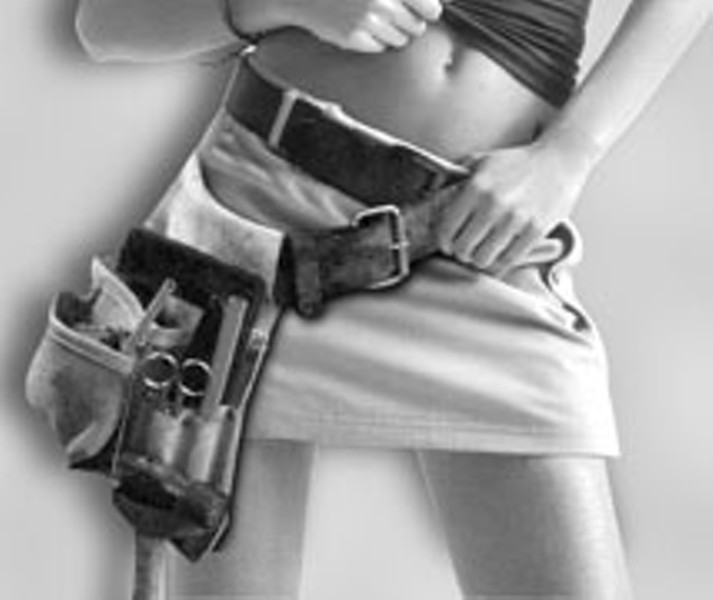 It worked. Stacy stumbled into marriage with me before she could be warned a sufficient number of times. Frankly, I question Stacy’s judgment now on nearly everything, based on her decision to become my life partner.

Still, in my own defense, I wasn’t a total loser. Not a total one.

Stacy knew that I was gifted in many ways. I could part my hair quickly (a talent as useful to me now as an ability to manicure lawns in the desert). I could watch someone get sick and not be affected myself (now that has come in useful as a parent). I could wiggle my ears. I could make a face that won me second place in the 1985 Ugliest Man on Campus contest at Virginia Tech (that was before all these kids started taking performance-enhancing drugs to keep up in today’s hyper-competitive and increasingly – yes ... ugly – Ugly Man Contests).

I just did not possess a natural aptitude in other, traditionally manly, areas. For instance, I don’t fix cars. Which is ironic, given the number of cars I’ve wrecked.

I don’t really follow sports, although I do play softball. But, then again, softball is to sports as beer is to Gatorade, so I’m not sure that counts. Or it counts double, one or the other.

And I am not too handy around the house. Not that I haven’t tried. I once installed a ceiling fan in our bedroom, which kept us cool and comfortable as we lay awake in bed, unable to sleep because of the incessant noise.

I change the litter box every month, whether it needs it or not. Then again, that’s not really man’s work — except for the fact that I personally know at least five guys who married women with cats, took over cleaning the litter box when their wives were pregnant, and are still cleaning the litter box today, even though their kids are nearing college age. You can expect another column on that sometime.

Still ... not so good with tools. After I turned in a particularly “Edward Scissorhands”-like performance trimming the hedges one day, Stacy took the tool belt away from me and put it where she knew I’d never find it — next to my weights.

Then, when we moved a few years back, Stacy insisted that we buy a new home. The idea was that there were fewer things to fix around the house, and we had plenty of time before there would be things that had to be fixed. Say, 10 years or so.

At first, Stacy was confident that I could spend those 10 years learning how to use tools. It wasn’t long before she realized that Cro-Magnon man took less time to learn to use tools.

So Stacy hiked up her skirt and strapped on the tool belt, and she’s been wearing it ever since. And she’s good with it. She installs light fixtures and uses one of those cutting things to make wood look the right shape, and she uses some other really noisy stuff to make other stuff work correctly — it’s really something to watch and I would watch her if I weren’t always cleaning out the damn litter box or sleeping on the couch.

Do I mind that Stacy wears the tool belt in our family? Heck no. She looks great in it. But then again, she would look great wearing a steel-belted radial, whatever that is. HS