Ethiopian food that makes a statement in Shockoe. 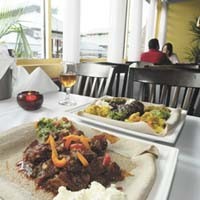 It's difficult to believe that almost 10 years have passed since Car Bomb played at Moondance's swan song in 1999. Since then, Shockoe Bottom has become more international with the addition of Thai and Ethiopian restaurants in the shadow of the 17th Street Farmers' Market. The restaurant Sheba, in the former Moondance space, is named for the historical leader who reigned over a kingdom including today's Ethiopia. She was said to have flirted with King Solomon. She now lives next door to LuLu.

Like most Ethiopian restaurants, injera — a thin and spongy bread, pock-marked and textured — serves as the foundation of Sheba's menu, literally and figuratively. Meals are served communally on large platters lined with the bread and laden with various vegetable and meat dishes that diners scoop up with pieces of injera that serve as fork, knife and spoon. In some ways it reminds me of meals with my 2- and 4-year-olds — utensil-free affairs.

Injera is unique to Ethiopian cuisine, and is made with teff, a species of love grass native to the northern Ethiopian highlands of northeastern Africa. It's gluten-free, high in protein and fiber and is similar to millet and quinoa. The tangy, almost sour taste comes from the two-day fermentation process that ground teff goes through to become bread. Dining in Ethiopia is characterized by the ritual of breaking injera and eating from the same plate, signifying the bonds of loyalty and friendship. In some circles, Ethiopians hand-feed their guests of honor in a ritual called gursha. Suffice it to say there was no gursha at my table. Service was friendly, albeit slow at times. I dined at Sheba with a friend who had grown up in Africa, and he found it to be in line with his experiences abroad. Time is not as linear as in the West.

On my first visit I started with kategna, an appetizer of toasted injera spread with berbere sauce (made from cayenne red pepper, allspice, cardamom, cloves, fenugreek, ginger, black pepper and salt) served with a mild farmer's cheese that picks up the tanginess of the injera and renders it closer to feta than goat. It's an adroit blend of crisp and spice and tang.

EntrAces fit into several categories: Wots (or stews) are made with a variety of meats (chicken, beef and lamb) and vegetables (lentils, potatoes, split peas and carrots) and range from mild to spicy. Rather than being stewed, tibs are meat and vegetable dishes sautAced in a clarified butter "niter kibbeh" infused with spices. We sampled ye-beg wot — strips of lamb braised in red pepper sauce. The spices impart a deep, rich heat; cayenne is mixed with fragrant spices that give it more dimension, in the same vein as Indian food. Sheba's special tibs feature local grass-fed beef cubed and sautAced in succulent morsels.

I wanted to try some traditional tej, a honey wine, with dinner but it was unavailable. Instead, a cold Stella Artois was a good choice to temper the heat of the berbere.

A second visit found us in the care of a delightful young waitress, not Ethiopian but half Guatemalan. She was well versed in the menu and humored us as we attempted to pronounce several dishes. Sambussas are like samosas (and share an interesting etymological connection) — pastries filled with meat or lentils. Sheba's lentil version was the perfect combination of spice and crunch.

Our injera platter was heavily laden. On the outer ring were colorful combinations of red lentils, split yellow peas, string beans and carrots, collard greens and a cabbage and potato dish. Two meat dishes graced the middle, including kifto — finely chopped beef cooked or raw with spiced butter. Many Ethiopians prefer their kitfo raw, but we took ours medium. Later I learned of the kitchen's pride in sourcing grass-fed beef. Ye-beg tibs were nicely sautAced cubes of lamb with onions, garlic and spiced butter.

This time the traditional tej was available, a wine much like mead, the drink of the gods. While it is sweet, it's not cloyingly so, and offers a nice counterpart to the spicy berbere that flavors so many dishes.

At first I was perplexed by the inclusion of spaghetti on the menu, but I recalled the colonial struggles of Italians in Africa as they battled for control of Ethiopia from the late 19th century until the eve of World War II. Is the spaghetti a nod to a colonial past or an attempt to sate an unadventurous diner?

Desserts are standard fare — for an American restaurant. Cheesecake and tiramisu do nothing to enhance an authentic experience. But chances are your belly will be too filled with injera, tibs and wot to need anything else.