Gaze upon these runes and be amazed: Kenneth Branagh's 3-D Thor. 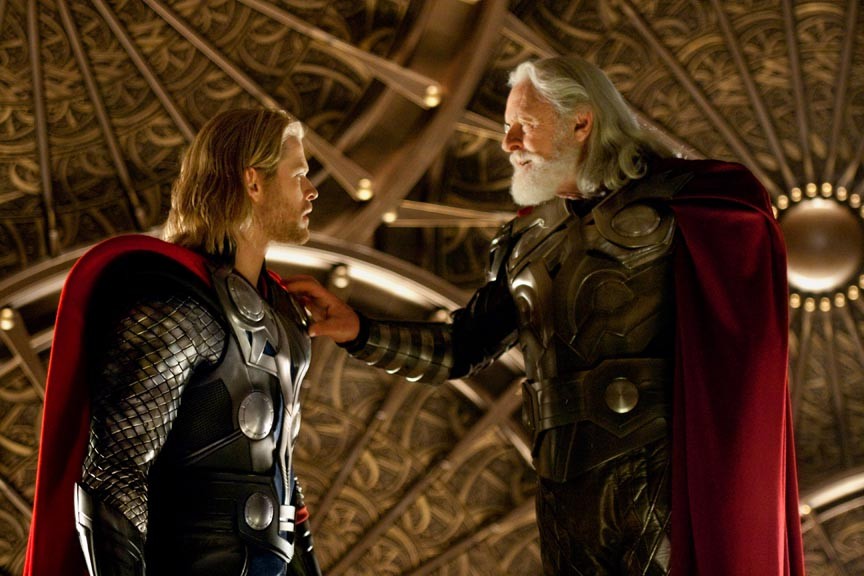 In "Thor," the comic-book adaptation, the god of thunder (Chris Hemsworth) arrives on Earth out of the sky, slamming into the SUV of astrophysicist Jane Foster (Natalie Portman). Her shock is comparable to that of some moviegoers realizing that someone has actually made a movie about Thor. Not the Norse god, exactly, but the comic book character based on him. To top it off, that someone is Kenneth Branagh.

It's understandable that the Hollywood gods would make a movie about any comic book hero they can dust off, as long as we mortals continue to sacrifice our debit cards on their altars. But even with the understanding that money trumps all other considerations, "Thor" seems a reach. Why Thor? And why Kenneth Branagh? As Jane puts it when she stands over Thor, knocked senseless in the desert, "Where did he come from?"

In ye olde flashback are we immediately shown the fictional side of this question, with a bounteous Valhalla-worth of computer-generated images recounting the story of the Asgardians, ruled by grave King Odin (Anthony Hopkins) and his sons Thor and Loki (Tom Hiddleston). With a little background action, we learn these godly inhabitants are all that stand between the known universe of a handful of planets, including ours, and the frost giants of the planet Jotunheim, who look like tall, blue Sith.

In the present, Thor declares another war on the frost giants, which causes Odin to banish him to Earth, along with his all-powerful hammer, Mjolnir. There he must learn to be a wiser god if he wishes to pull it, Excalibur-like, from its resting place. Along the way he meets Jane and her fellow scientists (Stellan Skarsgard and Kat Dennings), while trying to get his hammer back from Shield, the Marvel Universe espionage agency, which is the film's most overt attempt to tie "Thor" to a couple of its other franchises, including "Iron Man" and a forthcoming "Avengers" movie.

The origins of the film itself are too convoluted to cover in a mere movie review. Here are the words of the former director of "Hamlet," speaking recently to a Reuters reporter: "They have this unique cinematic plan to interweave these characters and these stories into 'The Avengers' [movie] next year. ... The impression I had was they want a strong point of view. They would argue with me and they would strongly produce me. ... . But they wanted a director. They didn't want just a shooter."

I don't have the thousand-mile gaze of Heimdall (Idris Erda), guardian of the Bifrost rainbow bridge, but I didn't see that strong point of view. I saw a competent, entertaining, but ultimately vanilla entry in the Marvel Studios empire, which is becoming more and more homogenous as it figures out what works and what doesn't with audiences.

As for that test-marketed entertainment value, the easiest way to summarize it is that on Asgard and, to a slightly lesser degree, Jotunheim, "Thor" is a pretty decent action film, and on Midgard (Earth) it's a pretty decent comedy, but the two halves come together about as tastefully as peanut butter and ketchup. In the heavens we get stupendous worlds created out of thin air, their gemlike brilliance beautiful to look at if ultimately without logic. On Earth we get other diversionary tactics, created out of words rather than someone's high-powered computer program. The results are amusing moment-to-moment, but feel somewhat less than necessary.

Hemsworth, an Australian, looks like Thor should look, with blond locks, blue eyes and a buff bod, but offers little besides beefcake and swagger. It may count as nitpicking in this realm, but wasn't he supposed to accomplish something? Yes, the gags, the action, the 3-D and the final battles are all finely tuned, but they are all also vague enough to fit anyone in a cape.

Comics, of course, are just as superficial and homogenous. But they cost 35 cents when "The Mighty Thor" was first released in the 1960s, and are intended for children. At what point during an international film adaptation with an alleged $150 million budget do the rest of us start feeling a little embarrassed? (PG-13) 130 min. S