The greatest (and worst) comedian in the world finally hits Richmond. 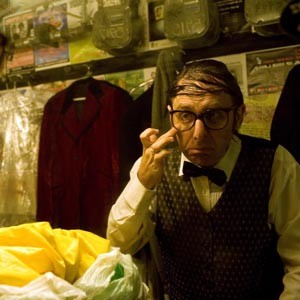 People either crack up at frumpy comedian Neil Hamburger, with his greasy comb-over, armful of sloshing cocktails and penchant for gargling phlegm onstage, or they try to cause him bodily injury. He's just that gifted.

“A guy in Asheville the other night tried to break my hand,” Hamburger says from a flat-tired van outside of Gallup, N.M. “One thing all these hecklers have in common is mental illness. They're sick individuals.”

And all they need is some Hamburger helper to bring it on.

The creation of Los Angeles-based Gregg Turkington, a former fan 'zine and record label founder who started with prank phone calls, Hamburger has been called everything from our greatest anti-comedian to the second coming of Andy Kaufman's crowd repellant alter ego, Tony Clifton. With his smarmy voice embodying three-week constipation and an endless array of politically incorrect put-downs, celebrity and band jokes (“Why did God give MAtley CrA¬e big penises? So they'd be better equipped for the pain of life”), Hamburger tortures the unprepared and has come close to inciting riots at larger shows opening for the likes of Tenacious D.

Call it humor for haters — or at least those revolted by pop culture.

Surprisingly, Richmond has yet to experience him, although he's heard of our history as the Capital of the Confederacy.

“You're not doing that [Confederate] stuff anymore is what I'm hearing from my sources,” he says.

The show will also feature yo-yo trickster Kenny Strasser, a YouTube sensation who pranked local newscasts around the country by performing live in-studio as a “yo-yo master” who promptly entangled himself or fell down.

“Hey, these are just good tricks. He knocks an apple off a guy's head with a yo-yo. That's a feat of engineering,” Hamburger says in his defense. “I don't tour with people who can't hold their own as entertainers.”

Hamburger may appear outdated but he's embraced technology in the form of his own iPhone application that functions as a Magic 8 Ball dispensing advice.

“If you say, ‘Should I burn my house down with my children in it,' I will tell you ‘No, don't do that.' And it only costs 99 cents,” he says. “Most soups that cost 99 cents taste like chemical toilet. This is a better deal.”

Ever out of step, he's also waging an all-out Twitter assault on Britney Spears that has earned him death threats.

“She can't sing, talk, dance or do anything. She's horrible. What she has is an out-of-control ego and taste for a bunch of drugs,” he says. “If you can listen to the sound of her vomiting pills with a backbeat to it, you've already got a screw loose.”

His online charity auction aims to raise money for kids to learn real instruments because, as he says, “a lack of musical skill has led to things like Britney — real trash. We're hoping to raise money so kids can play fife and piccolo. Piccolo is not a cheap instrument. … Spears should retire and donate millions to these kids. There'd be less V.D. and throwing up pills if she did.”

“For a couple million, you get a terrible, terrible episode of a terrible show from a complete asshole. You give me two thousand I'll give you a wonderful sitcom and be grateful,” he says. “He probably doesn't have long to live, so there's not much to say about him besides his work is a disgrace.”

Hamburger sounds intrigued that Steven Spielberg is shooting a Lincoln film in Richmond next fall.

“I'd be good as John Wilkes Booth, I guarantee you,” he says, following up by asking if there are many millionaires in Richmond who might fund a sitcom for him.

I remind him that Philip Morris cigarettes have been one of our corporate citizens. Maybe he could chain-smoke his entire set between hacking phlegm and bashing Smash Mouth and Courtney Love?
“Those guys have a reputable product,” the greasy-haired pseudo-comic says. “I'd love to meet them.” S

The Neil Hamburger Comedy Showcase featuring Kenny “K-Strass” Strasser Yo-Yo Extravaganza and Major Entertainer Mike H will be held March 15 at the Hat Factory with doors at 7 p.m. and show at 8 p.m. Tickets are $12 in advance.