Hamaganza Plans for its Last Blowout 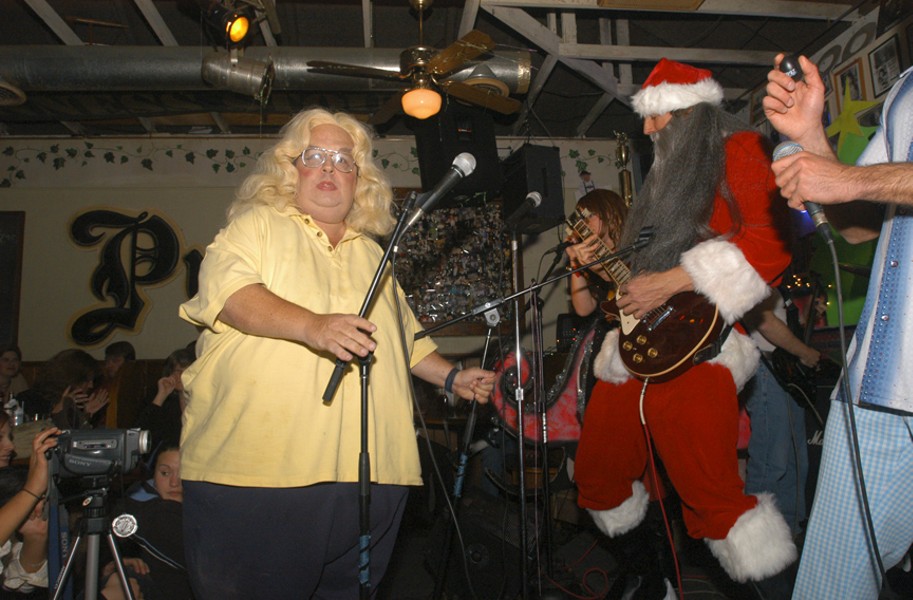 Scott Elmquist/File The dearly departed Donnie Corker, aka Dirtwoman, is shown here giving some mic love to guitarist and local reporter Mark Holmberg, during a Hamaganza charity event for FeedMore in 2004.

So says former organizer Chris Dovi, who recalls the event's mission as going three steps beyond what anyone wants.

For the uninitiated, Hamaganza is a 22-year old nonprofit event with a goal of raising money and collecting hams for FeedMore. This year's edition also will benefit Massey Cancer Center. Admission is $10 or a ham, the quality of which varies depending on the economy. Let's just say 2009 saw a lot of canned ham donations.

According to self-proclaimed Hama-ganzites, it's also a night for the underbelly of Richmond to mix with the upper crust in watching local officials — members of City Council, the General Assembly and School Board — lampoon themselves. The adults-only format is part rock show and part variety show, although talent isn't a prerequisite to perform.

Central to Hamaganza had always been Donnie Corker, aka Dirt Woman, but Corker died in September, so this year's event will not only be a tribute to Dirt, but the final Hamaganza. Expect all stops to be pulled out.

For organizer Dean Owen, who began as the event's music director and continues to write and direct skits, the memories that can be printed go way back.

"In 2013, Donnie gave birth to [comedian] Herschel Stratego," Owen recalls. "I was the attending physician, so when Herschel got stuck struggling to not be born, I had to yank him out from under Dirt's sleigh."

He recalls Joe Morrissey performing dressed as a woman, singing "Love Is Strange." Another memorable moment took place in the green room, he in a miniskirt and Morrissey with a flag draped like a toga. For light entertainment, they had Manoli Loupassi do a Jimmy Buffet song, although Owen recalls he wasn't much of a singer.

This year will bring back Hamaganza originator Peter Headley of the Vapor Rhinos. "Those guys always have something up their sleeve," Owen says of a band known to play so loudly you can't hear them. "I remember Peter putting a brick on the smoke machine button until you couldn't see your hand in front of your face, and that was just the tip of the iceberg."

Jonathan Austin, Richmond's ubiquitous juggler, has been a mainstay at Hamaganza, although Owen acknowledges during the years at Poe's Pub, a fire code regulation or two may have been bent. "I remember hiding Jonathan's torches from the fire inspectors," he says. Poe's was also challenging because there was no backstage area, so all costume changes had to happen outside regardless of inclement weather.

Both Dovi and Owen see Hamaganza as having given burlesque a kick-start in Richmond. Although there was a small burlesque scene in 2005, it wasn't being performed much and few people were aware of it. That year's Hamaganza featured burlesque dancers for the first time. "I like to think it's where the local burlesque scene got its start," Owen says with pride.

Former City Councilman Chuck Richardson, who'd memorized a lot of poetry while in jail, performed a spoken word version of Poe's "The Raven" set to a jazz background. Councilman Bill Pantele did a Kiss cover.

At its most basic, Owen sees Hamaganza as a ridiculously fun way to hang out with friends he doesn't see often, both in the bands as well as the crowd.

"And it matters because we have our fair share of homeless and downtrodden in Richmond, and helping the food bank is just being a responsible citizen. I mean, we've raised over $40,000 these 20-something years and that feels good. Plus, of course, we're all hams ourselves, so there you go." S