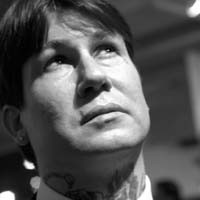 Sam Moore sits in isolation in Richmond Jail, serving as much as 60 days for his videotaped transgression with an underage girl.