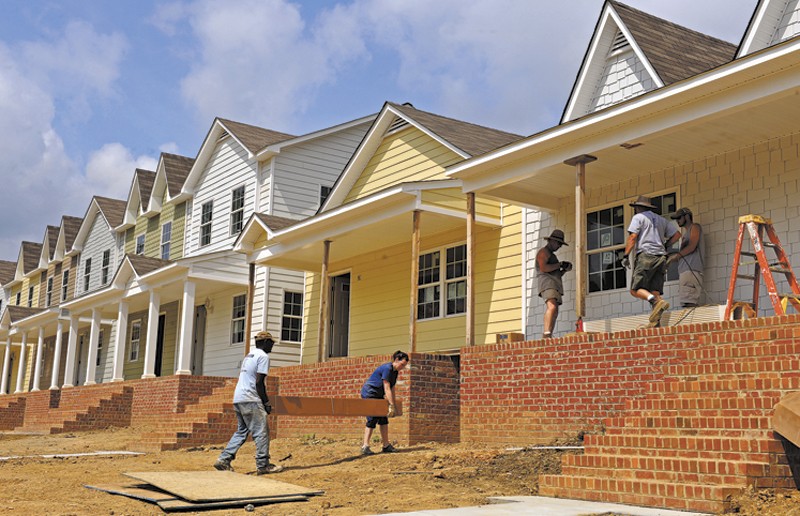 Two months after the sudden departure of its president and chief executive, Metropolitan Richmond Habitat for Humanity is racing to complete a flagship project that’s gone way over budget.

The Pillars at Oakmont in Church Hill, the nonprofit’s first venture into building mixed-income, attached housing, is two years behind schedule and has stalled the organization’s usual rapid pace of construction.

Last year about 10,000 Richmonders volunteered with Habitat for Humanity, a faith-based group that uses donations and volunteer labor to build affordable homes. For decades the organization has built the typical “Habitat house”: a simple bungalow with a front porch that volunteer teams can construct quickly. About four years ago, when then-President Leisha LaRiviere came on board, Habitat began to think bigger.

Its most ambitious project was the Pillars at Oakmont, a block of 15 row houses at T and 33rd streets, next to Oakwood Cemetery in the East End. The development was an experiment in combining houses for low-income families with houses sold at market rate.

The total cost of the project was originally estimated at $4 million. The Pillars’ major contributors include the Altria Group, Capital One and the city of Richmond, which kicked in federal grant money.

But Habitat has found itself paying more than expected to develop roads, power lines and other infrastructure. One source says Habitat owes its lender more than $900,000 for those costs.

Board Chairwoman Laura Lafayette says that’s not accurate. The board doesn’t yet know exactly how much the project has gone over budget, she says but it’s “significant. I mean, doable, but significant.”

Despite speculation, Lafayette says, Habitat doesn’t have cash flow problems and is certain it will be able to finish the first five Pillars houses by June 30, a deadline attached to grants it received for the project. “It’s just that there’s a bigger gap in funding than we would have liked,” she says, “and now we have to go find the money to replenish the coffers.”

Habitat’s reported revenues fell sharply in the 2009-’10 fiscal year, from $4.8 million the previous year to $2.5 million. The nonprofit’s cash flow depends heavily on the no-interest mortgages its clients pay for their homes. Because the organization’s resources and supervisors have been tied up at the Pillars, only three houses have been completed this year.

Five families hope to move into the Pillars soon, including Alexis Hall and her two young sons. Hall has spent the last two years cleaning up her credit, saving money and collecting thrift-store finds for the two-story house on T Street. “I’ve worked hard for it,” she says.