Gwar vs. Palin: Is Jimmy Dean Next? 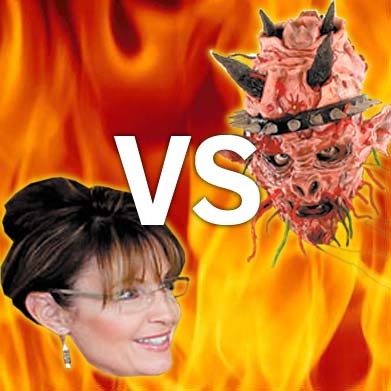 As anyone who's ever been splattered with goo at one of Gwar's concerts knows, the band doesn't do subtle. So when reports made the rounds that the Richmond institution had incorporated a Sarah Palin look-alike into its onstage act, you had to know that it wasn't so lead singer Oderus Urungus could wag his demonic penis at her in polite disapproval.

Actually, Palin's effigy was disemboweled, her legs were ripped off and her guts played with. A video capturing the stage dismemberment — during a Halloween show in Detroit — has been widely circulated online, raising the ire of Palin's legion of defenders.

“It's funny to me that considering what a cartoonlike character she already is that anyone would get upset about her getting killed onstage by a bunch of cartoon characters from space,” says a predictably unrepentant Urungus, aka Dave Brockie.

So, since the band doesn't mind the controversy and has been defiling the effigies of celebrities — political and otherwise — for nearly 26 years, we asked: Which local public figures deserve the Gwar treatment?

“Nobody” Brockie says by phone. “The closest things you have to celebrities are people in rock bands. Nobody outside of Richmond cares what's going on in Richmond.”

Brockie attributes that in part to the “inept boobs” in state and local government, who he says haven't done much to foster an inviting atmosphere for creative types.

Surely there's at least one Richmonder famous enough to satirize?

“Yeah, Jimmy Dean,” Brockie says of the late sausage magnate. “We will resurrect Jimmy Dean the Sausage King just so that we grind up his legs into sausage and feed them to him.”