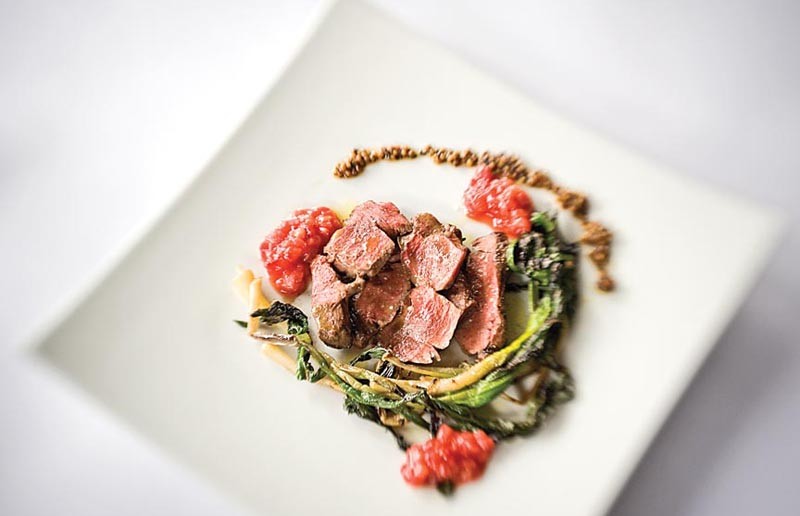 It’s not about having the guts to eat guts; it’s all about perception. Offal can be off-putting. From the Old English “off” and “fall,” the term refers to the pieces that fall from animal carcasses during butchering.

Although the word originally was used mainly to describe the entrails, its definition has widened to include all secondary and tertiary parts of an animal: the heart, liver, kidneys, lungs, brain, tongue, tail, feet and head.

And despite the recent nose-to-tail movement urging practical and humane reasons for using all parts of an animal, in general Americans have a problem with eating offal. Not so before World War II, when Americans consumed most of the offal produced, but for generations it’s gone missing from our diets.

For those seeking to experience some of the more unusual dishes seen on cooking shows, there’s a comeback at a few local restaurants. “They’re nice for a chef to be able to cook because they’re challenging,” says Francis Devilliers, chef and owner of Bistro Bobette in Shockoe Slip, where offal frequently shows up on the menu.

“You have to try to make it familiar,” Devilliers says. Calf brains didn’t sell in a traditional preparation sautéed with capers and butter. But when I did them as a beignet, they flew out of the kitchen and people wanted more.”

Another tactic is teaming it with a popular item, giving diners a chance to sample something they otherwise might not order. “I like pairing offal with something else you know will sell, like rib-eye, and then have roasted bone marrow on the side,” says chef Philip Denny of Six Burner Restaurant in the Fan. “It sells better as part of an entree, having it as a garnish.”

“Sweetbreads are the most regular offal on our menu and they sell surprisingly well,” he says. “They’re good in terrines, fried or sautéed, or good with fortified wine and mushrooms.” Sweetbreads are the thymus gland or pancreas, usually of a calf or lamb, and are valued for their velvety texture.

Chefs hope to reach the uninitiated by gradually adding more offal to their menus, which restaurants in larger cities have been doing for years.

“A small part of what our jobs are as chefs is to help people understand it’s OK to eat this kind of thing,” says chef Lee Gregory of the soon-to-open Church Hill spot, the Roosevelt. “I want to keep offal minimally priced so it’s not that much of an investment for people willing to try it. I’ll do buffalo sweetbreads mimicking the flavor of chicken wings where people have had that flavor before. I’ll spread foie gras butter on a hamburger bun.”

All three chefs express their desire to increase offal offerings as they become more readily available, even as its price inches upward. Devilliers recalls that when he first came to America to cook in 1981, his butcher gave him free offal to get rid of it.

They also need diners to get on board. Devilliers says he’d to serve blood sausage, but “that’s a real challenging one,” he says. “People are afraid of it.”

“It’s fun to work with things that are different,” Denny says. “I’d like to do pigs’ ears for their interesting texture. I like tripe, too. I’d have that if it would sell, maybe in a Mexican-flavored dish or an Italian tripe stew.”

Gregory makes no bones about his aspirations for the Roosevelt. “I desperately want to do crispy fried pigs’ tails; the problem is finding them. And braised tripe with a fried egg.”

“You cook chicken and steaks all night long so that you can sell deviled kidneys,” Gregory says. “It’s the one thing you do for yourself as a chef. It’s one of the fine lines you walk, trying to please everyone and please yourself. The guys at Mamma ’Zu have been selling that stuff for 15 years and people eat it.”

As more restaurants open and the public’s palate expands, Denny also sees possibilities. “I think there’s potential for offal to catch on,” he says. “There are people in Richmond who will eat this stuff. It would be nice if people try some new things and not just stick with safe.”