In the wild, they'd be enemies. But in Richmond's musical zoo, Trey Pollard and Alan Parker get along. 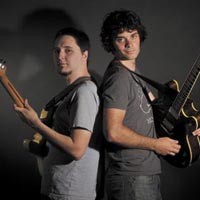 Trey Pollard and Alan Parker are natural rivals. They have similar histories: nearly identical educations pursuing the same sophisticated music with the same focused ambition. They should be fighting for gigs, not carving out a shared niche in the highly competitive local scene. Each seems to be the first-call substitute for the other, and it's not unusual to see them onstage together -- at Rex Richardson's faculty recital or with Mark Ingraham's canny funk band, Bungalo6. "We should get business cards printed up together," Pollard jokes.

"They are really strong players," says local drummer and bandleader Brian Jones, who's enlisted both in his Guitar Quartet. "Trey has a sarcastic, sardonic sense of humor thing that comes out in his music. Alan has a looseness I really love. Both are up for anything stylistically. Some guys want to have a discussion before they play ... How are we going to do this or that? With Trey and Alan, no matter what the challenge, there's no bullshit, just straight-up set up and let's play. When we talk, it's about life, not music."
It's a fact of life that there's no shortage of guitar players. It's a wonderfully democratic instrument -- a few basic finger positions unlock the blues/folk/rock vocabulary; combine some simple linear runs up and down the scale with attitude and amplification, and you're a head-banger's hero ("Not to knock heavy-metal bands," Parker says, "but if they haven't taught a monkey to play metal, they should"). But if guitar is easy to play, it's very difficult to master; beneath the superficial riffs is the vast melodic and harmonic landscape, each offering several choices for playing any given note. Beyond technique is the real challenge, developing compelling ideas in an individual voice.
There are a number of gifted guitarists on the scene, including the offhandedly astonishing Adam Larabee, whose stylistic range encompasses everything from bluegrass to bebop to the Balkans, the engagingly avant-garde/flamenco/bouzouki player Ayman Fanous and Patchwork Collective organizer Scott Burton, who's charting his own idiosyncratic direction with his Glows in the Dark ensemble (the band held the release party for its first CD at the debut of the "Balcony Concert" series at Thompson and Grace streets June 14). And, in the wings if not necessarily waiting, are young musicians such as undergraduate Carl Morse.
In this varied scene Pollard and Parker are uncannily matched, with parallel histories (musical childhoods, guitar-playing fathers, singing girlfriends, governor's schools and diplomas from Virginia Commonwealth University) and omnivorous musical tastes. They naturally aligned when they met at Parker's VCU audition in 2001. "I looked up to Trey," Parker says. "He was this cool pony-tailed guy in the top jazz orchestra. He was into everybody who was into music, knew a lot and was going to tell you what his opinion was."
"I asked him to play in my senior recital," Pollard recalls. "You'd have to play in that horrible church -- the sound was awful, so I was playing duos with a bunch of people. He got really good, better than me in the past few years."
"It's cool of him to say that," Parker responds. "But everybody knows it isn't true."
This self-effacement, along with a high level of focused talent, is central to their interplay. "Competition is fine, but not while you are playing," Pollard says. "It's not worth the music suffering from two egos."
There are other factors affecting the collaboration. Parker recently moved to Portland for several months to try his luck, returning because he missed the more raw and adventurous Richmond scene. He still sees making a name on a larger stage -- as Johnny Hott, Brian Jones and others have done before -- as being important to a long-term career. "I would like to move to another city," Parker says, "just so I can move back."
For now Parker is playing with his own band and appearing with Pollard in both Bungalo6 and the Brian Jones Guitar Quartet. Pollard plays with Modern Groove Syndicate and Bryan Hooten's Oombak biweekly Wednesday slot at Cous Cous (a summer replacement for Fight the Big Bull). According to Pollard, Scott Burton has proposed bringing together all of the top local players as "Guitarmy." It would be a valuable snapshot of a time when the city is particularly rich in guitar talent. Like all good things, it's a temporary phenomenon. S