An appreciation of a longtime local ax man, Velpo Robertson. 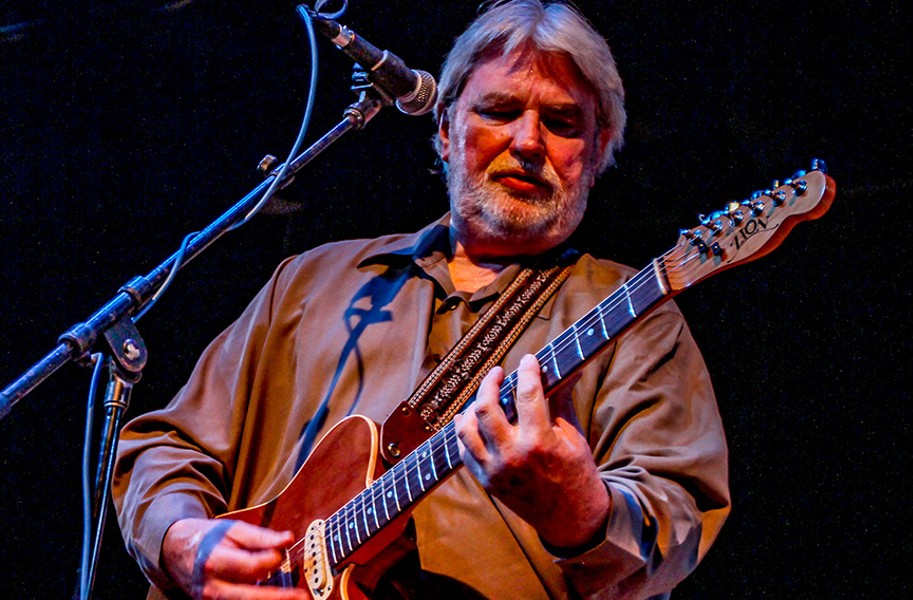 Richmond lost another one of its finest musicians recently. Velpo Robertson had been on the music scene in this burg since the mid-’60s, when barely in his teens.

He always had a solid, no-nonsense approach to his guitar playing. A simple comparison would be to Mike Campbell of Tom Petty’s band, not so much for technique as for inhabiting a song and playing the right notes at the precise time: no frills, just fluid lines and an effortless way around the song. Like Campbell, Velpo was a musician’s musician, having played with Robbin Thompson, MoDebree, Ray Pittman and many others. I was pleased to share the stage with him on several occasions.

A very early memory is of seeing him play guitar in a band when I was in junior high, so he must have been 13 or 14. It seemed that all the guys in school were just learning how to play, and here’s this cat a few years younger already gigging, yeah! Being novices, we were all envious of the amps and guitars, as well as the talent, and Velpo really had that. Here’s a quick glimpse of some of the gigs I saw him play in his bands the Hustlers and Short Cross:

Monroe Park in the early ’70s: The bass and drums pounded the intro to “Baby Please Don’t Go” and Velpo leaned in with the signature riff, all heavily converging at the edge of a sagging makeshift stage, made to sag even more by the band’s and the crowd’s sweat.

The String Factory in 1972: Short Cross had just released the album “Arising” and did a gig to celebrate to a packed house. The keyboard player wore a cape. The String Factory had already put on shows with Alice Cooper, Glass Harp and the Allman Brothers, among others. Today, the Short Cross LP does not sound dated. It’s a solid blues-rock record – Velpo was a good singer too – and copies of it go for big bucks on eBay.

In the late 1960s, at the Sandston Recreation Center: The Hustlers did a killer version of “Hush” by Deep Purple and Joe South. Purple’s version was still pretty new and Velpo led the ax attack. The band could also play ballads like “To Sir With Love.”

Velpo was fairly regular when I worked at Plan 9 and Peaches, and we’d always chat for a bit. Once, when I asked him what he’d been listening to lately, he said classical music. Bravo! We exchanged a few favorite composers. Another time, I ran into him when I was going to work and asked if he was there to get the Buffalo Springfield box set that had just come out -- of course, he said “yes.” Good man.

When songwriter Peter Case of the Nerves played at Ashland Coffee and Tea a few years ago, Velpo and drummer Rico Antonelli showed up and sat with a few of us. It was good to see him out, enjoying another’s musical legerdemain, of which he had plenty himself. Antonelli later mentioned that Velpo enjoyed the show immensely and had made a vow to get out more.

It can be awkward to tell someone whose talent you genuinely admire that you do. Once when he was poking through albums in Plan 9’s basement, I went up to him for the usual quick chat, having decided to tell him how much I’d always dug his guitar playing. Remembering that Velpo had had some heart issues over the years, I thought I’d better tell him now or I might some day regret it.

When a friend informed me of Velpo’s passing, that basement moment came hurtling back, which made me doubly glad of having told him how much his playing meant to a fellow musician.