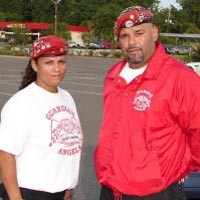 Jim Milet isn't from Richmond, but he spends enough time here to know the panhandlers along Grace and Harrison streets can turn aggressive.

Sitting at an intersection not too long ago, he says, a man talking on a cell phone approached his car window and asked for money. “I said, ‘Why don’t you sell your cell phone?' and he gave me the finger,” says Milet, who was visiting friends in the Fan.

He'd had enough, so he decided to call the Guardian Angels, the controversial watchdogs famous for their red berets, and inquired about starting a chapter in Richmond. The response was swift.

“We have numerous concerned citizens in the city of Richmond, and they are saying that they are having problems with panhandlers and minor drug problems,” says William Cruz, South East Coast regional director for the Guardian Angels, based in New York.

The Guardian Angels have 136 chapters in 13 countries, and have been patrolling the streets since the late 1970s.

“There are some guys who do foot patrols,” says Cruz, who earned the nickname Gladiator because of his knack for breaking up street fights. “We do more. We are going to stand there until you walk away, and until you can't make a dime, a nickel [selling drugs]. The same way with prostitutes.”

As for the panhandlers, Cruz says the group's presence will help cut down on the aggressive behavior. It's a popular theme. City Council is considering a proposal that would, in effect, ban panhandling to cars sitting in traffic. The proposed ordinance is scheduled to be taken up at City Council's public safety committee this week.

Kent Willis, executive director of the Virginia chapter of the American Civil Liberties Union, says he's heard of the Guardian Angels but doesn't know much about them. But he says he does know that panhandling is protected by the First Amendment.

Cruz says the Angels aren't interested in helping the city rid itself of panhandlers. “If they are going to panhandle,” he says, “we are going make sure they panhandle the right way.”

Cruz says he's planning to make a trip with a small group to Richmond in the coming weeks to test the community's response and meet with Milet's group. They also plan to meet with city officials to discuss the possibility of starting a chapter in Richmond.

“We'll patrol for a week to see what kind of response we get from the community,” Cruz says. “And if they are interested, they are going to have to take the initial step.”