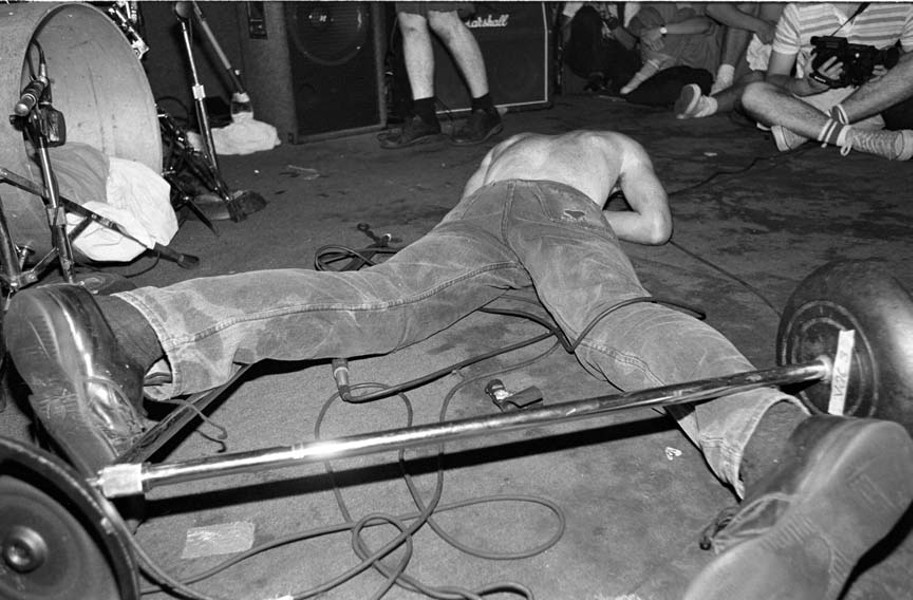 Vocalist and guitarist Guy Picciotto from Fugazi is face-down in this photograph from the music documentary “Salad Days: a Decade of Punk in Washington, D.C. (1980-90).”

In the early ’80s, most 12-year-old boys were into things like comic books, sports trading cards or the nascent video game industry.

Luckily, he was growing up in Washington during an especially fertile time around the birth of hardcore, when creative punkers embraced all-ages shows, hyper-local support and constantly evolving musical rebellion.

Crawford started a fanzine, printing interviews alongside friend Jim Saah’s photos documenting incendiary bands such as Minor Threat, Void, Rites of Spring and the Bad Brains. The Metrozine series is now housed in the University of Maryland’s archives.

As Crawford grew older, he became less of a fan boy and more of an objective journalist with the appropriate critical lens, writing for Alternative Press and starting the magazine Harp, which filed for bankruptcy in 2008.

But he never could shake his fascination with the ’80s scene.

It led him to launch a crowd funding campaign to make the documentary, “Salad Days” — named after one of his favorite Minor Threat songs — on which he’s worked every day for the past four years. The film’s theatrical run is selling out in major cities across the country, proving that the music still holds sway.

“It’s been incredible,” Crawford says, a day after returning from two sold-out shows in Los Angeles. “New York, D.C., Boston, Seattle all sold out in advance. You know you were a part of this thing that changed your life and others, but you don’t know the ripple effect until you get out there.”

The film focuses on the ’80s, trailing off by the early ’90s when such bands as Bikini Kill, Fugazi and Nation of Ulysses came to the fore. Crawford says he knew early on it would be impossible to cover everything.

“Being such a fan, I had to be careful for it not to be this inside baseball geek fest,” he says. “For me, the goal wasn’t so much to set the record straight but to create this storyline of the way things were for me … to show how things in D.C. laid the groundwork for what would come in the alternative explosion of the ’90s.”

He’s referring to the do-it-yourself, or DIY, approach of recording and releasing records, touring and putting on inexpensive shows that were all-ages, later revolving around social issues — approaches championed by Ian MacKaye and his Dischord label in Arlington and the Positive Force activist organization.

Even though Crawford knew many of the players since he was kid, the 43-year-old says he thought he had enough critical distance. “What I was trying to avoid was it coming off as people looking back at the glory days,” he says.

A particular stereotype that dogged the scene, which the film explores, is the cliquish and parochial nature of the straight-edge movement that eschewed alcohol and drugs. The funniest scene comes when MacKaye, who wrote the song, “Straight Edge,” which launched the movement, bemoans that he still gets drunken prank calls from kids, even though he’s older than 50. “Just two days ago it happened,” he says, exhaustedly.

“That always gets huge laughs,” Crawford says. “But a lot of people felt excluded from the scene, even back then. And [straight edge] was a polarizing position. It didn’t make it in the final cut, but Ian apologized that people think of straight edge or 5-dollar shows when they think of D.C. Then he says, ‘But at least we gave them something to talk about.’”

The film broaches other sensitive subjects too, including the early misogyny of skinheads and the trouble presented for women musicians. Crawford recalls the mostly male shows as extremely violent when he started going in 1983. “Every show there was some kind of drama, it would just erupt out of nowhere,” he says. “As a kid it was kind of intoxicating in a weird way.”

One of the featured talking heads, Dave Grohl, is an old friend of Crawford’s (who released Grohl’s band, Mission Impossible, on an ’85 compilation). The rock star gave some valuable advice off-screen, Crawford says: “He said just do your thing, you were there, tell the story you know and people will either respond or they won’t.”

The director was picky about the archival live footage used, because most was grainy and poor quality. But he’ll be releasing extra material on the DVD, expected to come out in late summer, with a video-on-demand release by midsummer and a coffee table companion from Akashic books in the works.

Crawford says he’s happy to be doing the Richmond screening with Plan 9 Music at the Byrd Theatre, with nearly 500 people already signed up by last week on Facebook

“I love that store, as a kid I can remember ordering their mail-order catalog,” he says. “I collected hundreds of fliers for the film, and when you look at those really early bands, a few are Richmond shows. So definitely there was an early connection.” S

“Salad Days” screens Sunday, March 15, at 7 p.m. at the Byrd Theatre. Tickets are $9 in advance at Plan 9 and $12 at the door, with proceeds benefiting WRIR-FM 97.3 and the James River Film Festival. Afterwards there is a question session with director Crawford, producer Jim Saah and guests.