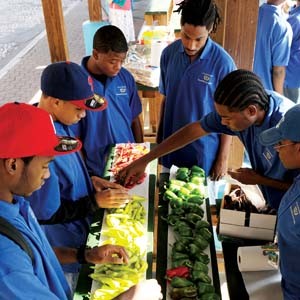 On a bright September morning, about a dozen smiling high-schoolers set up their fresh produce stand at the 17th Street Farmers' Market downtown. Change clinks as customers buy eggplants, one for a dollar, and green peppers, two for a buck. The teens also sell potted flowers — flourishing vincas, begonias and caladiums.

But things weren't quite as lush as they seemed. The teenagers had picked the veggies 15 minutes earlier from the bountiful garden behind the farmers' market, maintained by market manager George Bolos. There weren't yet any ripe vegetables at the Youth Academy's garden at 31st Street Baptist Church, staff said, because they got a slow start planting and found lead in the soil. The flowers were donated by Strange's a few weeks earlier, planted in the academy's garden, and then repotted to resell at the market.

The summer's Youth Urban Conservation Corps gardening program was part of the Mayor's Youth Academy, the city's much-heralded program for teens. A pet project of Mayor Dwight Jones, the academy was intended to get business, government, faith and nonprofit leaders to provide training and summer jobs for the city's young people.

If Richmond is ever to become a first-class city, “we have got to be very intentional about investing in our youth here,” says Carolyn Graham, the mayor's deputy chief administrative officer for human services, who oversaw the program.

But in its inaugural year, the Mayor's Youth Academy was plagued by problems: lackluster participation by businesses and teens, funding challenges, a late start and a hole punched in a wall. Will things be different next year?

Mayor Jones set a “very ambitious goal,” Graham says: He wanted the program to employ 90 percent, or 8,100, of the city's approximately 9,000 14- to 19-year-olds. “And we went all out to try to get as many businesses as we possibly could to engage in the hiring and support of our young people,” Graham says.

The city asked local companies to pony up $1,200 to either hire or sponsor a city teenager for six weeks. The response was muted: Seven businesses and 13 nonprofits offered employment placements. Five donated funds.

One corporate participant was Dominion Resources, which hired four Youth Academy teens for the summer. One young man was later offered a full-time job as a security guard, Graham says: “He was so proud.”

Most of the 183 teenagers who got jobs through the program ended up working at one of 26 city and state agencies. Ideally, Graham says, “we would not have to hire our youth in the Richmond city government.” In 2011 the city will be much more aggressive in asking businesses to participate, she says.

In the end, 471 teenagers — about 5 percent of the city's 9,000 — participated in the Youth Academy, whether by working, gardening, joining a counselor-in-training program or attending a summer camp. Younger children took part in the Challenge to Dream Initiative, in which truancy officers called roving coaches led activities such as a lemonade stand and anti-bullying workshops.

Eight percent of kids in the Youth Academy later were found not to be Richmond residents. “We will be a lot stricter going forward,” Graham promised City Council members.

The Mayor's Youth Academy cost around $678,000, not counting the salaries paid to teens employed in city departments. Corporate sponsorships provided $7,000, and many of the youth gardeners were paid with $81,268 in federal work-force investment money. The rest came from the city's parks and human services budgets, as well as state funding through the Richmond Health District.

When it comes time for City Council to approve the budget for next year's program, Council President Kathy Graziano says she'd like to see hard data showing the outcomes, as well as a total breakdown of costs — including how much the city paid the teens employed in its own departments.

The Youth Academy spent too much on some things, Graham says. Erring on the side of caution, the city hired too many counselors to monitor participants and spent too much on transporting teens on various field trips.

The city had to spend $1,875 for damages to the East District Family Resource Center, where, Graham says, staff said program participants damaged a restroom and punched a hole in one of the walls. The teens had to write a letter apologizing for the damage.

What it all comes down to, Graham says, is that “we don't live in a perfect world.” She says the Mayor's Youth Academy is “a phenomenal program model that needs a bit of tweaking,” and will run more smoothly next year.

The teens who participated praise the program. “This has been a good experience for me because I have never had a job that pays,” youth gardener Camisha Smith wrote in the program's literary journal. Tamondrick Burroughs, 17, says he learned how to craft a business plan and dress for success.

The garden program continues through the fall and winter. Most of the 59 teens who originally signed up “were not really interested in gardening,” says Linda Marshall, a lay minister with 31st Street Baptist Church who supervised the program. But 12 committed teens remain, she says, and have been meeting twice a week to plan the garden for the spring. Marshall says she's excited about next year, when the church will have 32 city-built raised beds — twice as many as this year — and the young gardeners will see bigger yields.

One of the ardent gardeners is Dominique Clack, 17, who spent the summer learning how to dig, water and weed. “I especially liked planting the seeds, because you're starting from scratch,” Clack said in September, while she helped pick vegetables from the bountiful 17th Street Farmers' Market beds.

“Hopefully our garden will look like this one day,” she said.