Opponents of Mayor Dwight Jones' proposal for a Shockoe Bottom ballpark are uniting around an alternative development — a plan they say will honor the area's slave-trading past while allowing for commercial growth to continue.

Announced this week, the plan is backed by historians, activists and neighborhood residents. It calls for the creation of an outdoor museum and memorial district, as well as the construction of a canal extension that supporters say would celebrate the now-buried Shockoe Creek and address storm water management issues in the flood-prone area. (Read the full outline of the plan here.)

It's the first time that what has been a disparate mishmash of ballpark opponents has come together behind a single counterproposal. The coalition calls it a starting point, with its members planning a series of community meetings to further shape it.

The group hopes to change the way people look at the debate.

"Up until this point people have only seen one idea illustrated," says Ana Edwards, a longtime stadium opponent with Richmond Defenders for Freedom, Justice and Equality. "We are very hopeful that this gives people another way to visualize what can happen in Shockoe Bottom."

The group that put together the plan includes such organizers as Edwards and her husband, Phil Wilyato, along with Waite Rawls, executive director of the Museum of the Confederacy, Randolph Bell, former president of the First Freedom Center, a group of Church Hill residents and some black activists.

They propose that the baseball stadium remain on the Boulevard, and that the commercial development the mayor has called for in Shockoe Bottom be allowed to go forward without a stadium. Instead of a sports facility, the plan calls for the two blocks bounded by Broad, 17th and Franklin streets to be dedicated to a memorial district that could take the form of park marked by monuments. 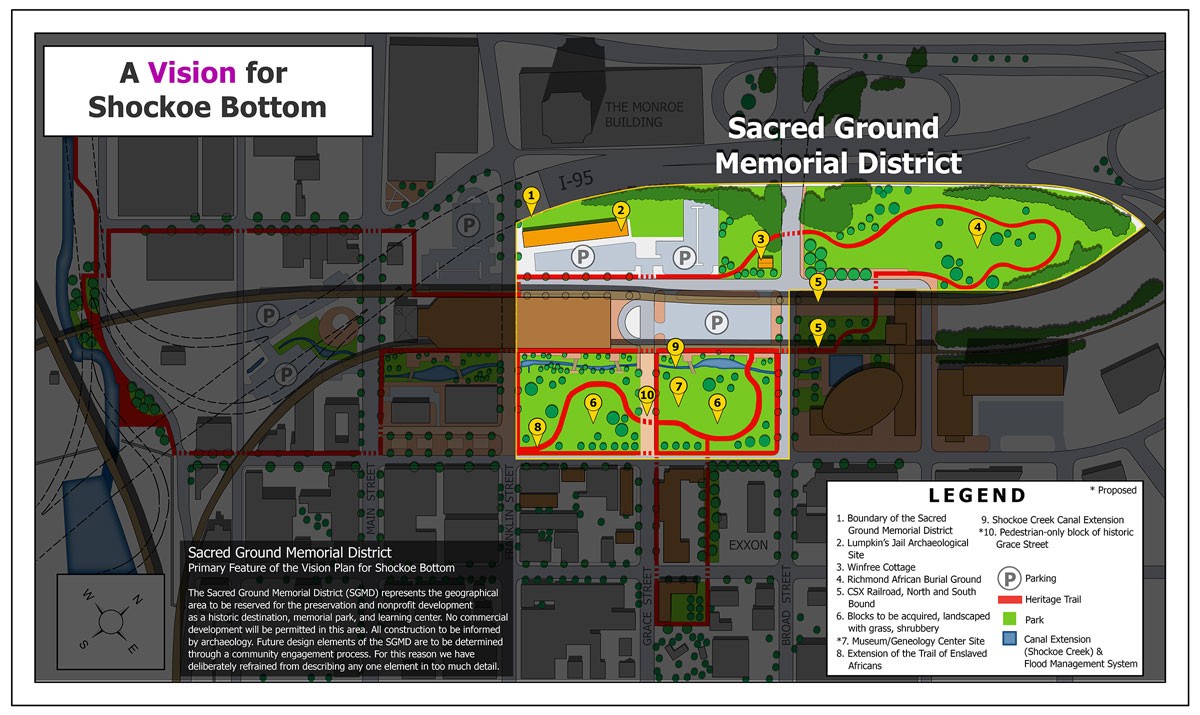 The park includes what the group is calling the Shockoe Creek Canal Extension, which would run along the east side of the railroad tracks and represent the "historic connection between Shockoe Creek, the Kanawha-Haxall canals and the James River," and help the city meet the Environmental Protection Agency's mandate that the city separate storm water and sewage.

The proposed footprint leaves existing businesses intact, the proponents say, and that proper planning for parking on the Boulevard will offer the same amount of space for new, private development as the mayor's proposal. Thus, they say, the plan could be financed in the same way as the mayor's ballpark proposal — with new tax revenue and bonds backed by a tax incremental funding district.