Group Providing Community Resource for Those Affected by Gun Violence

In an abandoned lot next to a condemned building, Shelia Green Hall steadies herself. She's 150 feet away from where her son Omar Timothy Green, 33, was murdered on June 17. Green, the city's 27th homicide victim, was shot outside the North Avenue Deli and Market around 10 p.m.

Sheila is back at the scene of the crime with family and friends on Saturday afternoon. Despite the intense July heat that leaves no delineation between sweat and tears, the group's members stand along North Ave passing out flyers, speaking over a PA system, and cooking hot dogs. They have formed a group, Overcoming Malicious Acts of Random Violence (O.M.A.R.) with a goal of becoming a community resource for at-risk citizens in areas of gun violence, domestic violence and poor health.

"Omar's body is gone, but his spirit lives on through us. You will be seeing us all over the city. This is not just one event," Sheila Green Hall says. "As long as our black men are dying in the streets, we will be in the streets."

Fanita Sawyer, Omar's godmother, says Omar found life boring in the suburbs. She tried to convince him to stay away from the city. He refused and ended up dead. Sawyer, who also lives in the suburbs, says people become numb and ambivalent to violence when it doesn't directly affect them. 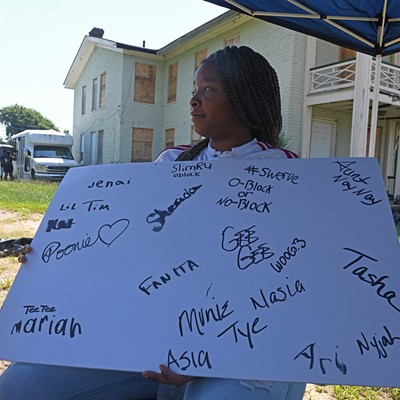 Compelled by Omar's murder, Sawyer says says she wants to be a catalyst for change. She cites the socioeconomic divide between the have and have-nots as a major contributing factor in gun violence.

"This has been a tremendous wake-up call. It's been a kick in my gut," says Sawyer. "This is not his environment. His environment was in the suburbs in a five-bedroom home raised by great parents. For whatever reason he wanted to come to this lifestyle and this environment took his life."

Shortly after explaining to 4-year-old Trent Fields, Omar's nephew, why he needed to carry a gun for his job, Lieutenant Anthony Jackson, 4th Precinct, Section 411 of the Richmond Police Department says no arrests have been made in the Omar Timothy Green case. He says only three murders in the city have happened in the 4th Precinct, which encompasses most of the Northside.

Between stints in her air-conditioned van to avoid the oppressive heat, Shelia Hall Green emerges to greet visitors and explain the group's mission. She embraces long-time friend Jackie Stewart who hops off a GRTC bus with her Pomeranian named Taco. Children run about with red icees, adults find shade on the porch of the boarded up dwelling and flames jump off a small charcoal grill, hot dogs plump and cracking. The atmosphere is upbeat despite the heat index of 105 degrees.

"My son is gone, but maybe I can save somebody else's son. We are tired of our men dying in the streets for no reason," says Hall. "On June 17, I don't know why, somebody came from around that bush and shot a gun which took my son's life. Nothing can bring him back, but anytime there's an event out here we might be able to save one life."